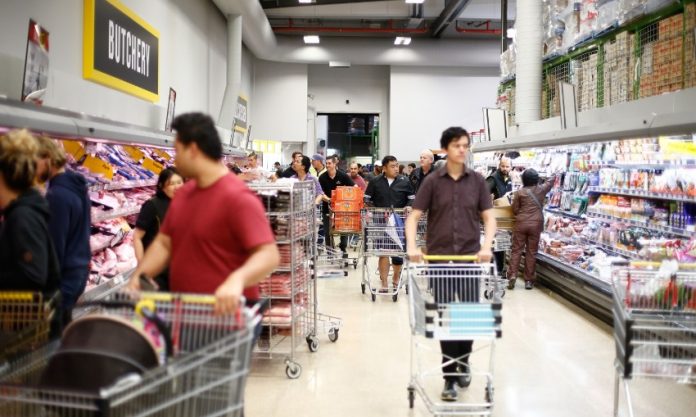 Foodstuffs’ store owners have narrowed the range of products sold as a result of the nationwide Covid-19 lockdown.

“Roughly one-third of the products we carry make up two-thirds of the volume of what is bought. So you very quickly narrow what you process down to that third, and get the most important items.”

Dropping the number and range of products sold helped in a few ways; it meant fewer products needed to be made by suppliers and could also speed up the restocking of supermarket shelves, he said.

“If you have 10 different products it’s a lot slower than if you have two products that have five facings.”

Toilet paper, quickly targeted for stockpiling when the first lockdown came into force, showed how the retail business could contract ranges.

Pre-covid, Quin said, stores might have 30 or 40 different products but there was no reason to have that breadth.

“A product like that, it’s about utility; the choices they want are a cheap one, a medium one, and a good one, and then they can choose according to what their desire is. That’s sort of it.”

During the lockdown, the retailer worked with its four main toilet paper suppliers to prioritise production of the highest-selling products. Before lockdown, it had approximately 80 different toilet papers, and it paused about 50 of these during lockdown.

It also worked with suppliers to restrict the range available within product lines, Quin said.

For flour, another lockdown staple under huge consumer demand, Foodstuffs might have had a 750 gram, 1 kilogram, 1.5kg and 5kg bags for sale. Asking a supplier to make two flour sizes instead meant they could make more product to get in store, and Foodstuffs’ stores could get them restocked on shelves to sell more quickly.

“A lot of stores narrowed down their range, just so they could get more stock out so customers could get it. And they have gone actually, that will work forever.”

Auckland University business school senior lecturer in marketing Mike Lee said there was a lot of benefit for a business in downscaling the amount of product to deal with, focusing on doing fewer things but delivering them at a much faster pace and “also probably presenting the products you have in a far more manageable and less cluttered fashion”.

For a consumer the lack of options wasn’t necessarily a negative, Lee said. Behavioural economics and psychology research showed sometimes too much choice was overwhelming.

Lee’s own study, done with researchers in Germany, split consumers into two groups: one was offered 16 choices, the other eight.

“What we found showed people didn’t actually mind, they enjoy the purchase decision more or feel more confident they have made the right choice when they have fewer options to choose from.”

The flipside is that competition is good for a consumer usually, Lee said. Competition means companies have to innovate and compete on price. There would be room for a cheap product in a range, a middle-range item and something high end, but consumers would also purchase a sustainable or hypoallergenic option for sensitive skin, he said.

In some product categories you could see companies creating multiple different products under separate brands that were the same, in order to buy out shelf space and capture market share, Lee said.

A classic example of this was when the painkiller brand Nurofen was pinged by the Commerce Commission for making too many products that were all the same ingredients and marketing them as being for specific types of pain. This kind of choice creates false competition that consumers don’t need and creates confusion and clutters up shelves for retailers, Lee said.

Retailers are competing for customers on choice. There was an “arms race” for product diversification but it can often just be for diversity’s sake rather than being real choice, he said. The move to cut down product ranges made sense.

Another permanent change wrought by the pandemic was how New Zealanders were shopping, and when. Quin said people were shopping less often, but planning more. They were cooking at home more, and demand at supermarkets hadn’t dropped as New Zealand’s alert levels lifted.

Staples for baking, canned and frozen goods, and long-life milk had doubled, tripled and even quadrupled in the nationwide lockdown. Sales of those items had now fallen back, but to about a 50% increase on pre-Covid levels, he said.

Competitor Countdown also reported increased sales in frozen goods and basics. It said many of the products that were popular over the last lockdown such as flour, coffee and frozen goods, have continued to be popular again. It had seen a more than 20% increase in demand across its entire frozen section with frozen poultry value added and vegetables with more than 30% growth.

But it wasn’t all upside for the co-op: its New World Metro outlets suffered as CBDs emptied.

“We made the decision to support their staff, and their wages from the co-op. Overall we were trading strong, so we decided the wage subsidy wasn’t the right thing to do,” said Quin.

Another trend that has settled in is increased sales through its Four Square stores. You can see this illustrated through truck movements. Foodstuffs found an additional 60 trucks to help make deliveries through the lockdown peak. It was making 250 more deliveries than normal, and many of those were to its smaller format Four Squares, Quin said. Some that would have got three deliveries a week were getting six.

Big box and that one-shop-at-the-mall was possibly replaced by a shop local. And once consumers tried local, they found they liked it, Quin said. Again, there might not be every brand or every product, but “I can get what I need, and people have decided I’m going to stay with this.”

This article originally appeared on BusinessDesk. Their team publishes quality independent news, analysis and commentary on business, the economy and politics every day. Find out more.

The Spinoff Daily gets you all the day’s best reading in one handy package, fresh to your inbox Monday-Friday at 5pm.

6 Games to Play When You Want to Feel Like an...