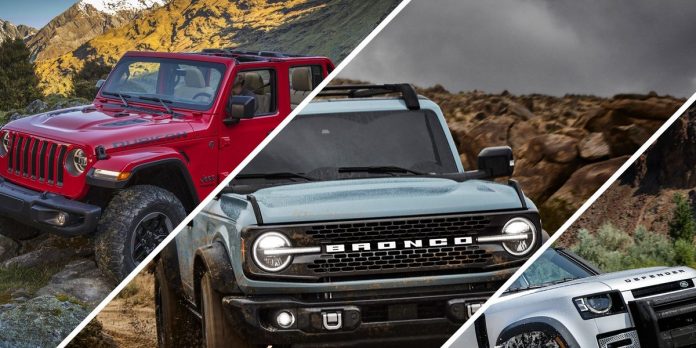 The endless drip-drip-drip of leaks and speculation is over: Ford has finally unveiled the new 2021 Ford Bronco SUV. Now that we’ve seen the new off-roader, it’s time to compare it against its competitors.

Ford’s obvious target for the new Bronco was the Jeep Wrangler (and FCA is taking major steps to combat that new threat.) But if you’re in the market for a Bronco, you’re also the sort of person who would consider a Toyota 4Runner. And if you’re looking at a fully-loaded Wildtrak-trim Bronco, a Land Rover Defender may also be on your shortlist.

Below, we offer a quick rundown on the four off-roaders’ specs, pricing and features.

History: The Bronco is a new model for 2021, one that harkens back to the original first-generation Ford Bronco built from 1966 to 1977. Ford nixed the Bronco after 1996, but revived the model for 2021 after exquisite vintage ones became sought after vehicles (and Wranglers began minting cash for FCA).

Defining Feature: Modularity. The Bronco took the Wrangler’s customization abilities to the next level; it can be extensively modified off the lot with more than 200 dealer-installed accessories, as well as seven different trims at launch. It’s also designed to make it easy for not-particularly-mechanically-inclined owners to add and swap exterior parts with minimal labor. You can truly build a unique Bronco.

Transmission: 7-speed manual (I-4 only) or 10-speed automatic

History: The Wrangler descends in a straight-line from the original Willys Civilian Jeeps produced after WWII. The CJ became the Wrangler in 1987 under Chrysler’s stewardship. Jeep added the “Unlimited” four-door model in 2006, which has since become more popular than the two-door.

Defining Feature: It’s old-school. The Bronco took a number of pages from Jeep’s playbook with open air accessibility, customization and a manual transmission option. But the Wrangler, running on front and rear solid-axles, is still the closest thing to the vintage, boxy off-roaders of yore left on the road.

History: The 4Runner descended from the Toyota Trekker, a modified truck made in collaboration with Winnebago. It has been in the Toyota lineup since 1984. It (sort of) replaced the original FJ40 Land Cruiser in the American lineup as the brand’s pared-down off-roader. The current fifth generation debuted for the 2009 model year.

Defining Feature: Build quality. The 4Runner is nowhere near as updated as the competition. But it may be the most bulletproof and durable vehicle on the road and has a correspondingly high resale value.

History: Land Rover ended production of its traditional, body-on-frame off-roader in 2016 after a 67-year production run. The company revived the Defender nameplate for 2020 with a unibody construction and numerous technical upgrades.

Defining Feature: It’s more sophisticated. The Defender went for a more expensive market and doubled down on the luxury and tech. It has features like an adjustable air-suspension typically found in luxury SUVs the others do not.

Fleets try to stop the spread of Covid-19 – Truck News