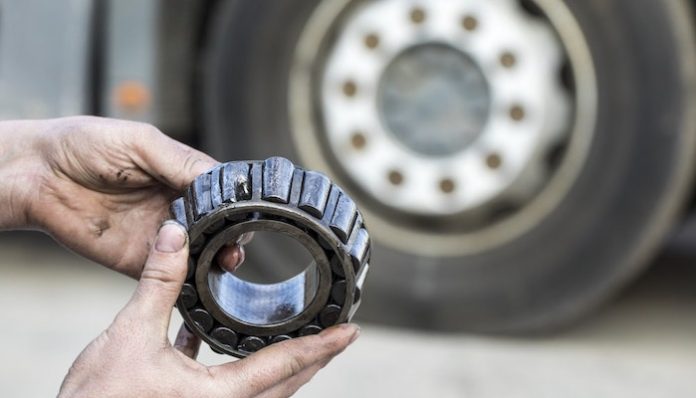 In late February, not long before COVID-19 and the new culture of social distancing, the American Trucking Associations (ATA) held its 2020 Technology & Maintenance Council (TMC) Annual Meeting in Atlanta, where a session on wheel-end thermal events was among several meetings that week.

It was standing-room only, packed full of fleet owners, fleet managers, technicians and truck manufacturers.

Interest is high in maintaining wheel-end integrity because no fleet customer wants the costly and dangerous breakdowns that wheel-end failures can bring.

“Our families are certainly riding along next to these commercial vehicles while they’re going down the roads at 80,000 lb., and we want to make sure the end-user knows how to do proper installations and the procedure because the adjustment is so crucial that it can’t be left to interpretation,” says Mike Hartman, SKF national account manager.

At the heart of dependable wheel-end performance lies proper wheel bearing adjustments. TMC’s RP-618 serves as the gold standard in making those critical adjustments that can improve uptime and the bottom line. Hartman quickly referred to those recommended practices, as did Vincent Purvis, STEMCO product manager for wheel-end products.

“STEMCO is proud to partner with TMC in the constant development of their recommended practices for recommended wheel-end procedures and maintenance,” says Purvis.

Bearings won’t get far without the proper lube and for that Purvis pointed to TMC’s RP-631B which provides recommendations for wheel-end lubrication.

In the age of 24/7 news feeds, it doesn’t take long to come across some tough stories on wheel-end failure.

“I read on average there are two sets of wheel-ends that come off a day in the United States,” Hartman says.

When other components fail, like an alternator, starter, injector, injector pump or EGR valve, the wheels remain on the truck. Faulty injectors aren’t exactly racking up the sort of headlines that have attorneys drooling. Bearing failures, however, are a much different story because they can lead to a tragic and costly wheel-off incident.

Though thankfully not as dramatic, other signs of wheel bearing failure include excessive heat, noise, reduced fuel economy and wheel wobble, Purvis says.

Of course, there’s a lot more to maintaining a smooth, safe ride than swapping out bearings and races. Tools, torque settings and lubricants all play vital roles.  Reaching TMC’s recommended wheel bearing end play of .001- to .005-in. requires a calibrated dial indicator “with its magnetic base affixed to the hub or brake drum.” This isn’t boat trailer maintenance. Simply feeling out for bearing end play without a dial indicator is not recommended, experts say.

“I think the old days of not being able to use calibrated tools and stuff like that have gone by the wayside and a lot of the fleets value training,” Hartman says. “They want to keep their technicians abreast of the latest training efforts and most of the manufacturers do supply that at no charge now because it’s so crucial to have that end-play dialed in within one- to five-thousandths of an inch if it’s a manually adjustable hub.”

Haste makes waste, and there’s simply no room for errors where bearings are concerned.

“Common missteps during bearing adjustments might include improper tightening, not checking end-play, not installing the axle fastener correctly or completely, not spinning the hub to set the bearings and not following the TMC recommended guidelines,” Purvis says.

Keeping a close eye on parts can make all the difference.

“Check the condition of the spindle and the hub itself and make sure there’s no cracks and no deterioration noted,” Hartman says. “Then when you mount everything, properly align it without damaging any of the components. When you’re putting them on, always support the hub while you’re putting the bearing assembly through. And when you start your tightening sequence make sure you’re using the proper tools and that you’re following the recommended practice. Again, for a manually adjustable hub, you would use the RP-618 for sure.”

Missing the mark on proper bearing adjustment can lead to some tough consequences.

“If you over-tighten the bearings or adjust them too tight you will obviously generate heat and burn up the wheel-end,” Hartman says. “If it’s too loose, you’re going to have damage to the bearing and you’ll also pull on the seal itself, which may potentially leak in the future and can lead to a safety issue because if a seal’s going to leak you could potentially have a thermal event. You could soak the brake shoes, which would denigrate the stopping distance and everything else that goes along with that.”

Simply put, no customer can afford to take shortcuts on bearing adjustments.

While seal damage often conjures up images of techs hammering away on a block of wood, file or some other object to seat seals into a hub, other lapses in judgement can lead to damage. Hartman laments the use of improper tools, particularly with seal placement.

“It’s unfortunate that people will use whatever they have to put a seal in,” he says. “Each manufacturer specifically uses their own tooling that’s designed to work with those types of seals for installation purposes.

“There are some manufacturers that don’t require any type of special tool,” Hartman says. “You can essentially use a hand tool like a rubber mallet. That negates some of those tool issues that we see are in the market where people are using a block of wood, flat bar or something to put a seal in. It could do more damage to the seal unbeknownst to the end-user because they may not see it but internally the seal could be damaged from an improper tool being used.”

Just like improper seal installation can lead to shorter bearing life, so can lubrication issues.

“Lubricant integrity is critical to the function and durability of all wheel-end components,” Purvis says. “STEMCO recommends frequent inspection of the wheel-end for lubricant contamination and/or water intrusion. STEMCO is committed to continually testing lubricants available to the heavy-duty trucking industry to support the best performing systems. We publish a regularly reviewed list of recommended wheel-end lubricants.”

“We have, at SKF, a complete lubrication validation department with our rubber engineering. Every time we meet with a specific fleet or an OE that wants to use a specific lubricant, we actually take that and run a compatibility test with it because we don’t know how everybody’s different type of lubricants are going to interact with certain rubber,” says Hartman.

“There are multiple variations of every different type of rubber and how they react with lubricants can be unknown at times and that’s a problem,” he says. “So what we do is run compatibility tests and put them through, in some cases, up to a 30-day full testing period to make sure there’s no type of degradation of the product or any type of contamination that we see with result of a lubricant that’s going to effect the seal, which would denigrate the life of it.”