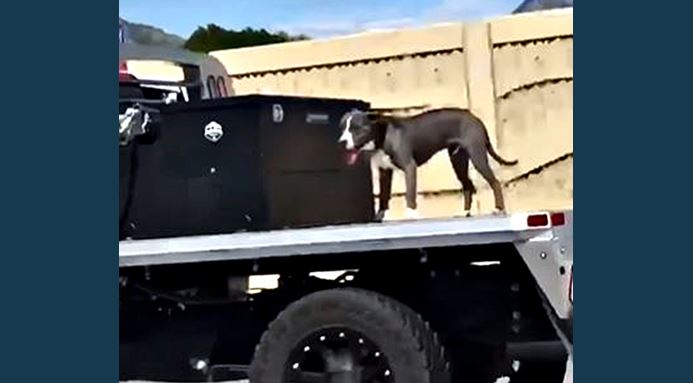 Did you know that approximately 100,000 dogs are killed in accidents each year due to improper transport in truck beds? This is a completely preventable tragedy! The American Veterinary Medical Association recommends keeping your animals safe during transport by keeping them inside your vehicle. If your animal must travel in the bed of your truck, put him in a crate, and secure the crate to the truck bed’s walls or to the truck bed itself. For more information, visit http://www.utahhumane.org/media/dogs-riding-truck-beds.#petsafety

UTAH, July 17, 2020 (Gephardt Daily) — The Humane Society of Utah is asking people transporting pets not to leave them in the beds of pickup trucks or flatbeds of commercial trucks.

It’s not illegal, but it results in the deaths of at least 100,000 animals per year, according to industry estimates.

“Though not illegal, it is incredibly dangerous for the animal and other motorists,” the agency’s statement says. “The Humane Society of Utah adamantly opposes this practice and urges drivers to find an alternative way to transport their animals, such as a fully secured crate or inside the cab of the truck.

Legality does not equal safety. According to American Humane, it is estimated that at least 100,000 dogs die in accidents each year due to riding unrestrained in truck beds. This amount does not take into account the number of humans who are injured or killed due to the distraction caused by seeing an unrestrained dog on the highway.

“We receive a lot of calls, especially in the summer, from drivers who are extremely concerned for the well-being of a dog they see riding in the back of a truck,” said Rachel Heatley, Utah Humane Society advocacy and investigations director, in the statement.

“We want to educate dog owners about the extreme dangers associated with this practice. We’ve received animals to our shelter in the past who have fallen from a moving vehicle, and it is heartbreaking that the incident could’ve been prevented if the animal had been restrained properly.”

The American Veterinary Medical Association recommends the following to keep your animals safe while traveling by vehicle:

Never allow an animal to travel in a cargo area of a vehicle, such as the bed of a truck. Cargo areas are unsuitable for animals due to a lack of protection from the weather, including heat than can burn paw pads and cause heatstroke.

Cats should always be transported in carriers.

Do not allow your animal to ride with their head or paws outside the window. Dirt and other debris can enter their eyes, ears and nose causing injury or infection. Paws can also be injured by debris, severe weather or passing vehicles.

“Though leaving an animal on a truck bed while in motion is legal in Utah, what is illegal is causing injury to an animal intentionally, knowingly, recklessly, or with criminal negligence,” the Humane Society of Utah statement says.

Though the state of Utah does not have a law restricting animals from traveling in truck beds, some cities have local ordinances for transporting animals. Contact the Utah Humane Society Advocacy Department at advo…@utahhumane.org for additional information.

One Dead, Two Injured In Route 80 Construction Truck Crash In...