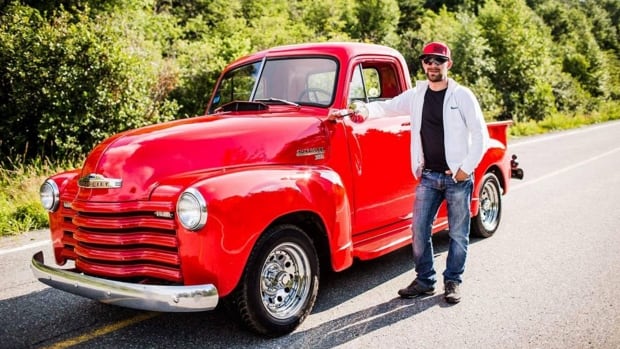 Salmon rods pointed to the clouds.

A parade of cars, from antique to muscle.

On Thursday afternoon, the people of Deer Lake showed their support and shared their anguish over the death of Goulding, 41, as hundreds lined the sidewalks and more parked in their cars to acknowledge his funeral procession.

“They paid a beautiful tribute to him today and everything that he loved to do,” said Sherri-Lynn Pinksen, a family friend of Goulding’s. “He loved to fish, he loved to hunt, he liked to guide, Ski-Doo, fish, anything. That’s exactly what he did. And he was a great mechanic.”

Goulding, who worked in a garage with his father, was well known in Deer Lake. Many were left in shock when they heard of his death following a boating accident Sunday night at Alder Steady Pond, located in a large area of wilderness known as Goose Arm.

The call to police came in at 10:50 p.m. Search and rescue and RCMP officers from Deer Lake recovered Goulding, who had drowned. He was wearing a life preserver but it was not inflated when he was found. An investigation continues.

At Thursday’s vigil, the focus was on the man Goulding was, and how much he meant to the community. Many greeted the procession with tears, and others shouted their goodbyes as the hearse passed on the street.

“I think the community of Deer Lake is great,” said Pinksen. “We always come together. People shut down their businesses today just to show respect for Jody and his family and everything else.”

One of Goulding’s prized possessions was his 1949 Chevrolet pickup truck. Driven by his parents, it followed the hearse during the procession.

Friends in other antique automobiles came from throughout western Newfoundland to join in the vigil.

Steve Hancock said he’d known Goulding most of his life. They fished together, and Hancock was a customer of Goulding’s at the garage.

“There’s a lot of memories,” Hancock said. “I guess one of the things, it’s the last memory I have of him when he was doing work on my car — we had a pretty good laugh that day. So we have a lot of memories.”

The breadth of the support shown Thursday afternoon was no surprise to him either.

“For most of us it’s a sense of loss and (we) show up today to give some sense of closure to the family, I guess. What else do you feel when something like this happens? It’s a surprise. Nobody expects it. So you just deal with it the best you can after that.”

Goulding’s adventurous spirit is remembered well in the town of 5,000, and the support shown to family and friends rang loud Thursday.

For people like Pinksen, it’s the little things that will remind her a man she’s known most her life is no longer there.

“I will just miss seeing him going back and forth, because I live down in that area by the garage in his Jeep and that all the time … see his face smiling.”

The grain elevators of Kansas

In-depth Analysis of the Global Industry with Future Estimations – Jewish...

Pickup rolls downhill and hits car and house in Saanich