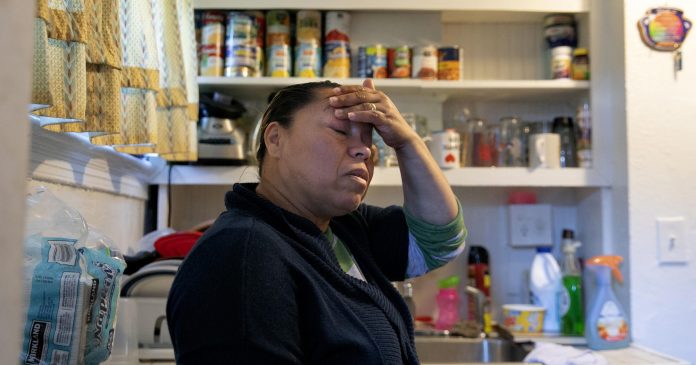 With his business on pandemic-related hold, Red Lion man makes food pick-up as easy as pulling to the side of the road.

WASHINGTON — When all this started — when the coronavirus began stalking humanity like an animal hunting prey, when she and her husband lost their restaurant jobs overnight as the world shut down to hide, when she feared not being able to feed her family — Janeth went outside with a red kitchen towel.

It was Passover. Her pastor had told her about the roots of the Jewish holiday, about Israelites smearing a lamb’s blood on their doors as a sign for the plagues to pass them by. So Janeth, an immigrant from Honduras, reached up to hang the red towel over the door of her family’s apartment on the edge of the nation’s capital. It was close enough, she figured, “to show the angel of death to pass over our home.”

Pass us by, coronavirus.

And pass us by, hunger.

At night now, it’s the worry over food that keeps Janeth’s mind racing, and her heart, she says, hurting. “I spend hours thinking, thinking, about what we will do the next day, where we will find food the next day,” she says weeks into the coronavirus outbreak, her family’s food and cash both dwindling.

More: 30 million have sought US unemployment aid since virus hit

Unemployment: Janeth and her husband, Roberto, are part of the greatest surge in unemployment in the U.S. since the Depression, setting off a wave of hunger that is swamping food programs nationwide. The couple and every adult member of their extended family in the U.S. have lost their jobs in the economic lockdown prompted by the pandemic.

They are among the tens of millions in America — more than 1 out of every 6 workers — abruptly cut off from paychecks.

The Associated Press is withholding the couple’s full names because they are in the country illegally and could face deportation. Their immigration status, their problems with English and scanty access to the Internet all combine to block them from accessing the U.S. government benefit programs that millions more newly jobless citizens are able to turn to during the outbreak.

Before the pandemic, food policy experts say, roughly 1 out of every 8 or 9 Americans struggled to stay fed. Now as many as 1 out of every 4 are projected to join the ranks of the hungry, said Giridhar Mallya, senior policy officer at the Robert Wood Johnson Foundation for public health.

Immigrants, African Americans, Native Americans, households with young children and newly jobless gig workers are among those most at risk, said Joelle Johnson, senior policy associate at the Center for Science in the Public Interest.

“They’re more vulnerable to begin with and this situation has just exacerbated that situation,” she said.

What’s left: When the global economy clamped down, Roberto, a cook in his mid-30s, and Janeth, who keeps water glasses filled at another restaurant and is in her mid-40s, spent $450 out of their final paychecks to stock up. Weeks later, their diminished cache includes two half-full 5-pound bags of rice, an assortment of ramen noodles, a half-eaten bag of pasta, two boxes of cornbread mix, four boxes of raisins and cans of beans, pineapple, tuna, corn and soup.

“Cookies?” Roberto and Janeth’s 5-year-old, gap-toothed daughter Allison still asks them, always getting a gentle “no” back. “Ice cream?”

Janeth and Roberto have cut down to one meal a day themselves, skipping meals to keep their daughter fed.

On a good day recently, after Roberto landed four hours of work preparing take-home meals for a grocery store, they had enough for what constitutes a feast these days — a can of refried beans split three ways and two eggs each, scrambled. Janeth also made tortillas from their last half-bag of masa flour.

After cooking their one meal for the day of beans, egg, and handmade tortillas, Janeth worries while standing in her kitchen, Wednesday, April 15, 2020, in Washington. “Where can we get enough food? How can we pay our bills? We have never had to ask for help before,” says Janeth, with tears winding their way down her cheeks. (AP Photo/Jacquelyn Martin) (Photo: Jacquelyn Martin / AP)

Janeth placed aluminum foil over two of the plates; she and Roberto would eat later. Tears sprang to her eyes as she watched her daughter wolf down the meal.

“Where can we get enough food? How can we pay our bills?” she asked. Then she repeated something she and her husband emphasized again and again over the course of several days: They are hardworking people.

“We have never had to ask for help before,” she said.

Supporting family: Janeth and Roberto also have three adult children and, as the oldest of three sisters here, she and Roberto are trying to keep a half-dozen households in the United States and Honduras fed.

By day, they race in their second-hand pickup truck from food pantries and churches to relatives’ houses. They chase tips about food giveaways or temporary jobs. They share their painstakingly acquired cartons of food with her two sisters, who themselves have a total of five young children to feed, and call their grown children with leads on food lines.

And they fight off despair. “We don’t have help. We don’t know how it will end,” Janeth said.

On a recent day, Janeth and Roberto’s breakfast is coffee and a few crackers. Allison eats cereal, a favorite provided by a food bank.

Soon after, Roberto and Allison, who is sporting pink sparkly sneakers, are among the first in line outside a DC food pantry. In line with them: a young African American man newly unemployed and seeking aid for the first time and two foreign-born nannies with their clients’ children in tow. The women now are only intermittently used — and paid — by their employers and need help feeding their own children at home.

Roberto is happy to leave with a bag of bananas, some spaghetti, tomato sauce and other staples.

Another day, Roberto and Allison stay inside the truck while Janeth heads out in a cold drizzle to approach a church said to be providing food. She struggles to read the sign in English posted on the door, then calls the numbers listed. No one answers.

Later, loading their pickup truck to take food to Janeth’s sisters, husband and wife dip into the pockets of their jeans to display the cash they have left — $110 total.

That’s gas money. Without that, living on the outskirts of town, there’s no getting to food banks, to one-day cash jobs, to stranded relatives facing eviction and hoping for food.

On the drive to Janeth’s sisters in Baltimore, Janeth hands Allison a small container of applesauce. The girl savors each taste, dipping in her finger, licking every last bit. “More?” she asks hopefully, tilting the container toward her mother.