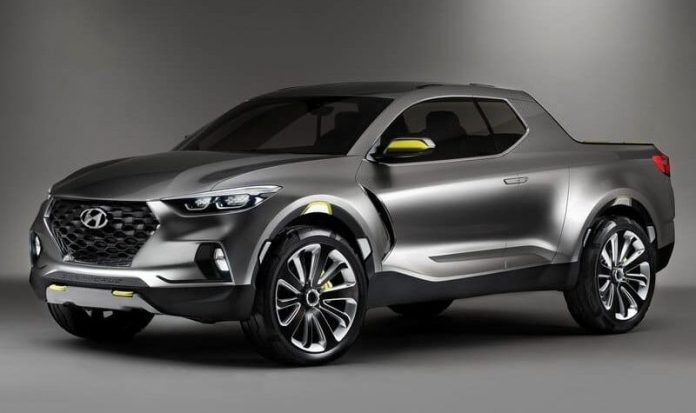 Hyundai has confirmed it will launch its first pickup truck for the Unites States into mass production.

This is about the 2021 Hyundai Santa Cruz that shares the chassis and a number of components with Hyundai’s best-selling Santa Fe SUV.

The unibody pickup features a four-door crew cab and a single bed length. It offers a choice of inline-four engines with displacement of 2.0 and 2.4 liters combined with an 8-speed automatic gearbox and all-wheel drive.

This vehicle is a production version of the Santa Cruz Crossover Truck Concept presented at the 2015 North American International Auto Show in Detroit. That concept reflected a new interpretation of truck utility and targeted Millennials.

It was equipped with an eco-friendly 2.0-liter turbo diesel powertrain delivering 190 hp and 300 lb-ft of torque, and achieved fuel economy of 30 mpg.

Hyundai will build the Santa Cruz pickup at the plant in Alabama, where the Santa Fe rolls off the assembly line.

Being a direct rival to the Honda Ridgeline, which also has a unibody construction, the 2021 Hyundai Santa Cruz could compete with a number of midsize pickups, although its towing and payload capacity figures are comparatively small.

We mean the Chevy Colorado, Nissan Frontier, Toyota Tacoma, Ford Ranger, GMC Canyon and even the Jeep Gladiator, to some extent.

The 2021 Hyundai Santa Cruz should arrive at dealerships next year. The starting price is expected to be around $25,000.

Could This Truck Be a Preview of the Next Toyota Tacoma?...