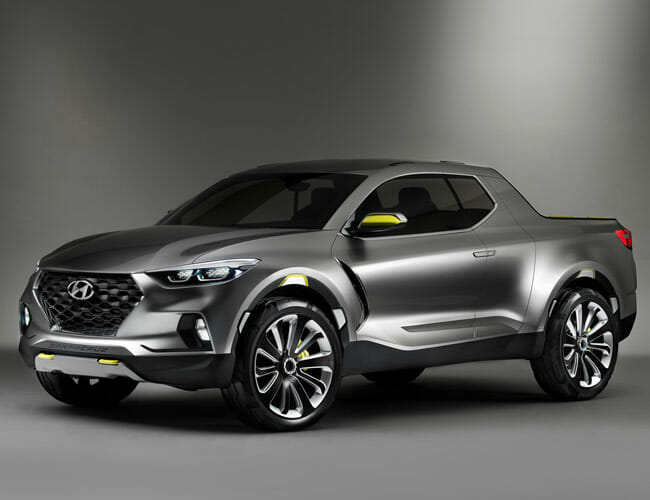 Update, 6/19/2020: New spy photos have emerged showing the Santa Cruz with less camouflage than before, giving us a better look at its front end. Not surprisingly, it’s a stylish face much like that of the new Palisade.

The midsize truck segment’s name is about to make sense again. Hyundai has just announced it will put the Santa Cruz, its compact crossover truck concept, into production in Alabama starting in the year 2021, with the help of a $410 million investment in the plant where the carmaker currently builds the Sonata and Elantra.

Hyundai is so confident about the Santa Cruz, it’s not even couching the unibody vehicle in traditional truck language.  The company’s press release referred to the Santa Cruz not as a pickup but as a “crossover” and a “compact utility vehicle,” in spite of the bed slung out behind the passenger compartment. The Santa Cruz will aim to meet the “unspoken needs of a new generation of buyers,” according to Hyundai (read: millennials).

The $64,000 question — or, more likely, the roughly-$30,000 question — is what the Santa Cruz will look like. Hyundai revealed no information, re-using the photos of the Santa Cruz concept that debuted back in 2015. Looking great was central to the initial concept’s appeal: it projects a sharp, powerful stance without appearing as though it’s trying too hard. Deviating too far from that initial impression could ruin the effect, and remind buyers it’s going to be a smaller Honda Ridgeline. (Though one would expect Hyundai to at least extend the cab a little bit for the production version, to accommodate a second set of full doors.)

Hyundai could be making a shrewd move bringing the Santa Cruz to market. Most automakers have geared their lineups toward Baby Boomers, who have the most buying power (see: expensive, spacious trucks and SUVs that are easy to get in and out of). Younger buyers looking for an affordable car or truck may be a neglected part of the market. Those buyers would, theoretically, be less hung up about truck tradition — and, well, buying a Hyundai.

There may be other entrants to that marketplace that the Santa Cruz has to fight with, though. Volkswagen released its small Tarok concept truck earlier this year. Ford has reportedly been working on a small unibody Focus-based pickup. Here’s hoping the movement entices Subaru to revive the BRAT/Baja lineage.

Northern Italy is rattled by a 4.5-magnitude earthquake