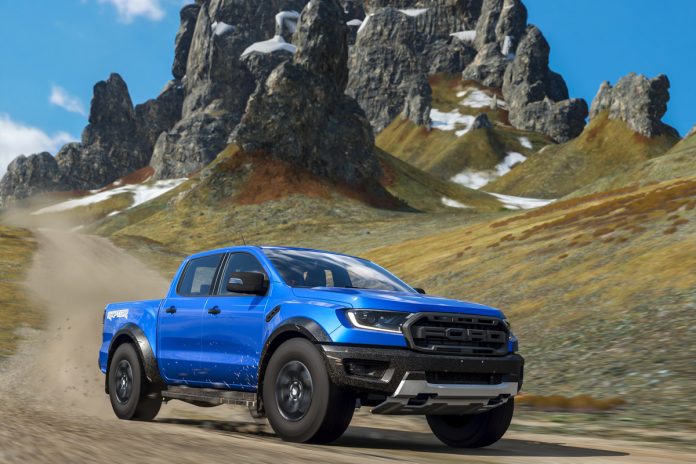 IT’S true, I do love big trucks and the Ford Ranger Raptor is the best pick-up ever.

Just look at this beast, by far the best looking and coolest pick-up you can buy.

Developed by Ford Performance it’s the closest thing to a road-going, Baja 100 Trophy truck you can buy.

With a reinforced chassis, and suspension wise the Raptor uses FOX shocks with Position Sensitive Damping.

The rear leaf springs that you find on a standard Ranger, have been replaced by coilovers that features an integrated Watt’s linkage.

They allow the axle to move up and down with very little lateral movement giving an increased 18 per cent travel.

The track is 150 mm wider track and ride height is 51 mm taller plus the front wings are flared and there’s chunky wheel arch extensions all round.

To help bring it to a halt there’s twin piston calipers up front and calipers and ventilated discs at the rear to replace the old drum brakes.

And for superior grip BF Goodrich specially developed 33-inch by 11-inch all-terrain tyres are fitted that have extra thick wall lining to take punishment from rocks when off-roading.

The Raptor also has underbody protection to deflect obstacles and the bash plate is made from 2.3mm thick high-strength steel plus there are also large metal side steps that double up as rock and mud protecters.

I got to test the Raptor to the extreme last year in Morocco and this included rock climbing, driving through the Sahara desert climbing sand dunes and putting to good use the intelligent 4WD and its six different modes: Normal, Sport, Grass, Gravel and Snow, Mud and Sand, Rock.

Plus for unbeatable off-road performance, Baja mode that we tested tearing along the beach with a few jumps thrown in for good measure.

The Ranger Raptor, although it shares the name with the American F150 Raptor, isn’t powered by a supercharged V6 petrol engine, instead power comes from a 213bhp, 2.0-litre, Bi-turbo, EcoBlue diesel that produces and 500Nm of torque.

Power is sent to the rear wheels in normal driving conditions via a 10-speed auto gearbox, then you can also switch to 4×4 high or 4×4 low while on the move.

In Sport mode it sounds brilliant with a purposeful growl suiting the Raptor’s monster truck stature.

And despite its size can sprint from 0-100kph in 10secs with a 170kph top speed but the Fox suspension makes this the best handling pick-up.

It’s super absorbent and yes it does float about a bit at speed, but the grip is superb.

So much so I’d liken the Raptor to an off-road sports car.

But driving it, flat-to-mat, does have its downsides as I could only manage 24.5mpg but did so with a huge smile on my face.

Even though the Raptor is classed as a lifestyle vehicle it still has a 2,500kg towing capacity.

Plus two front recovery hooks are able to shift 4,635kg, and two at the rear are rated 3,863kg and it can carry 680kg in the rear payload.

THE Ford Ranger Raptor is an extreme version of the Ranger.

But this doesn’t mean the regular Ranger is any less of a machine, especially as you can buy it with the same 2.0-litre bi-turbo diesel that produces 213bhp and 500Nm of torque.

So the Wildtrack model I’m reviewing here is every bit as wild as the rowdy Raptor.

For a big pick-up, 0-100kph in 10secs dead feels pretty quick and it does it with minimal fuss, launching you down the road.

And the 10-speed auto gearbox, smoothly shifting the gears up to its 170kph max.

It’s very comfortable and can with ease on the motorway thanks to Adaptive Cruise Control, but like all pick-ups with rear leaf spring suspension, the back end can feel a little light and performs better when you are hauling cargo in the rear payload.

But the Ranger is a proper workhorse able to carry 1,024kg in the rear and it can tow up to 3,500kg and the rear view camera has a handy feature called Trailer HitchAssist that does exactly what it says on the tin, displaying marker lines over the image indicate where the back of the Ranger and tow hitch is heading.

It’s also formidable off-road with same shiftable 4WD system as the Raptor, minus Baja mode, and it also benefits from Hill Start Assist and Hill Descent Control plus it can wade through water 800 mm deep.

I managed nearly 30mpg and for a machine that tips the scales at 2,246kg, not bad when consider a few, so called, ecofriendly petrol powered SUVs that I’ve tested recently couldn’t do much better.

This king-cab configuration can seat five adults with ease although the person stuck in the back middle row will have limited leg room with the transmission tunnel and the centre console.

But all passengers will benefit from a very luxurious interior that is on par with modern SUVs.

As well as having dual climate control and electric everything back passengers have ample charging points plus a 230v 3-pin socket so you can charge tools or even boil a kettle for a cuppa and you can keep your milk fresh in the chilled centre console — now that’s cool.

Up front the 8-way power adjustable leather seats are heated and embossed with Wildtrak logos plus orange stitching to match the Sabre orange exterior paint.

The Ranger keeps you connected via Ford’s latest SYNC 3 infotainment that’s viewed via a 8″ touchscreen with Sat Nav and if you opt for the built-in Ford-Pass Connect modem you can remotely lock and unlock your pick-up, receive live traffic updates, and your kids will give the ability to connect to a WiFi hotspots, a big thumbs up.

And it is packed with safety features like Pre-Collision Assist.

The only downside with the Ranger it’s fitted with a regular Ford blue oval logo on the front grill and doesn’t ge the cool, huge Ford letters sprawlled across the front like the Raptor.

Motorcyclist Airlifted To The Hospital After Highway 97 Crash With Pickup...

Sickest Pickup Truck Concepts We Ever Laid Our Eyes On