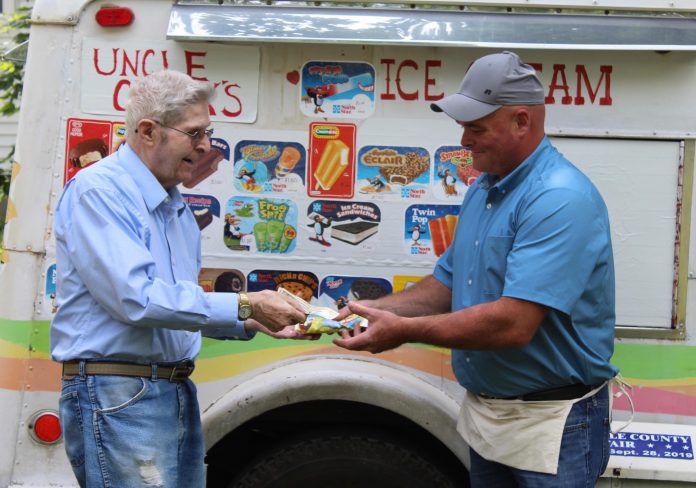 HILLSDALE – Like a mirage out of the past, a familiar sound of summer can still be heard – though a new driver is now delivering ice cream treats in and around Hillsdale.

The string of jangly notes known as “Circus Clown Calyopy” used to mean Gramp’s Ice Cream had arrived. After owning the business since 1985, Gary Scoville decided to turn over his longtime venture, along with his numerous caps, to Charles Howe, who runs what’s now called Uncle Chuck’s Ice Cream.

Scoville, 85, said he met Howe through one of Howe’s other ventures.

“He owns a lawn mowing business, among other things, and I had been calling around to see who I could get to mow since I felt I shouldn’t be doing that anymore,” Scoville said. “He was the only one who showed up, so I hired him.”

Soon, Howe asked about the ice cream business and Scoville knew he’d be the one to sell it to.

“He came to me about it and I thought it was the right time,” Scoville said. “He has the right attitude to continuing the business. He and his wife, Amy, are really enjoying it!”

Howe, soon 42, said he likes to diversify when it comes to businesses, but it’s the ice cream business that gives him a chance to be with kids, since he loves being around them the most.

“He’s an icon,” Howe said about Scoville. “I’m not him, but doing something you enjoy is what it’s all about.”

Scoville became a fixture in the county as he drove either his truck or train engine to bring joy and treats to children of all ages. The truck is 55 years-old, the train is 44 and Scoville sold ice cream 33 years.

It all began when he subbed for his daughter, Sue, who worked for the truck’s previous owner, Bill Rials.

“I realized I liked it,” Scoville said. “So I drove the truck, too, for Bill,” he said. “When he had the business, it was called Mother’s Ice Cream. After I took it over, I had grandkids, so it became Gramp’s Ice Cream Co.”

The truck is a 1965 three quarter-ton Dodge truck that’s traveled all over the county, not just in Hillsdale. In town, he drove his train engine that was formerly a meter maid’s vehicle used to issue parking tickets in the city many years ago. Rials had it converted into an ice cream carrier, complete with engine wheels painted on and a cow catcher on the front. An old-style baritone horn is mounted in front to look like a smoke stack.

“The kids really love it,” Scoville said. “And, they’re not afraid of it, so I had to be safety conscious all the times because I wanted to have repeat customers.”

And those repeat customers, sometimes three-generation families, are ones he knew by name. He even inspired kids across the street to dress up for Halloween one year as an ice cream vendor and ice cream cone.

Their mother, Lindsay Falke, once took a picture of her children leaning on the fence with Scoville’s engine on the street. The iconic photo, representing a fading era, ended up in the annual Hillsdale County Fair photo competition. She said it showed how her children looked forward to summertime.

Scoville said he’s missed getting ready for the summer season this year, but he set Howe up with the vendor he used in time for the July 4th weekend.

Scoville figured there are 22 “gatherings of houses” in Hillsdale County that he frequented. He carried the novelty Prairie Farms ice cream that Howe will continue with.

Popular ice cream choices run from the Frog Spit (push-up pop) to Strawberry Shortcake, the nostalgic Choco Taco and old-fashioned sundae cones. There are more than 18 varieties in all, and their prices haven’t increased in years. Items cost $1 or $2.

Scoville said he never took credit, just bills. But along with payment, he often received drawings from customers and he’s saved them in a scrapbook, along with pictures his wife, Margit, put together before she passed away in 2011.

Scoville’s signature cap collection ranged from railroad caps to ones made with colorful popsicle prints. Out selling his treats seven days a week, he finished off his look with suspenders worn over a crisp shirt.

Spreading good humor, his music was heard through September, when the kids went back to school.

“It was the best job in the world,” he said. “I couldn’t imagine doing anything else.”

Howe said he’s happy to continue the tradition four days a week for now. He’s in Jonesville on Wednesday, Hillsdale Thursday and Friday and southern county lakes areas on Saturday.

He’s already been to a graduation celebration and hopes people will let him know when to show up for those special occasions. He hopes to eventually tie in his Chunky Butts barbecue business with the ice cream.