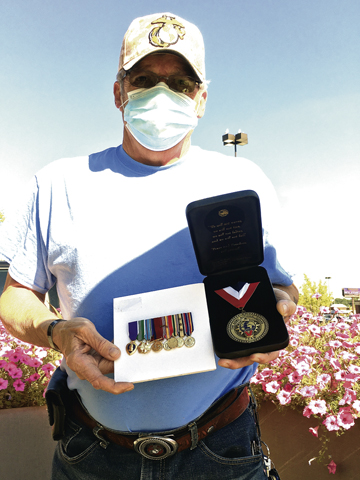 Correspondent photo / Sean Barron
Edwin “Gene” Apgar of Struthers, holds a series of medals he was awarded for his military service that began in 1970. At right is a special Army National Guard Team Medal given by President George W. Bush in October 2001. At far left is the Purple Heart.

STRUTHERS — Edwin “Gene” Apgar vividly remembers the day when several military recruiters visited his high school in Mount Orab and how the one representing the Marine Corps sounded the right notes.

It didn’t take long for Apgar to make good on his decision. Soon after the school visit, he spoke in greater depth with the recruiter, took a physical exam and enlisted in the Marine Corps Reserve, all two months before receiving his high school diploma in May 1970.

Apgar also served four years in the U.S. Air Force as well as several years in the Army National Guard, which included time in the Iraq War.

After taking a second oath in Cincinnati, Apgar went from the Reserves to the Marine Corps that began with a flight to Atlanta and a few bus trips to Parris Island, S.C., for boot camp, from which he graduated Sept. 25, 1970. From there, he took another bus to Camp Geiger, N.C., to receive about four weeks of advanced infantry training, and he learned to be a vehicle mechanic and a truck driver.

“I followed in my dad’s footsteps,” Apgar said, referring to his father’s occupation as a truck driver.

During this time, he served six to seven months with the 2nd Marine Air Wing Motor Transport and made his rounds checking on transportation trucks to ensure they were in good condition. In 1972, Apgar received a surprise when he learned he had 45 days to report to Camp Hansen in Okinawa, Japan, which began with his superiors initially thinking he might have gone AWOL because he was unable to get a flight for more than a month from San Bernardino, Calif., to Japan, he remembered.

After things settled, he spent about 13 months in Japan and the South Pacific, including time in Okinawa.

In 1977, Apgar’s military career saw its second iteration when he joined the Air Force and was stationed at Rickenbacker Air Force Base, south of Columbus. He worked largely as a cook and an assistant cook in a dining facility before leaving in 1981 to raise his three sons, Apgar said.

That didn’t mean, however, that he hung up his uniform for good.

In the late 1990s, an Army National Guard recruiter approached the seasoned veteran about joining, but Apgar was reluctant, saying he was too old. Nevertheless, the recruiter prevailed and signed him up for six years, Apgar saidd.

He served with the 216th Combat Heavy Engineers, which eventually was activated to go to Iraq in early 2004.

“We were in Cherokee, Panama, at the start of the (Iraq) war” before returning in June 2003, Apgar said.

During his tour of duty in Iraq, Apgar was responsible largely for hauling heavy equipment and gear and driving a truck, he said.

“Anything that needed to be moved, we moved it,” Apgar said.

The veteran may have finally put away his military gear, but that doesn’t mean his days of serving others are over.

He is a member of the Youngstown-based Disabled American Veterans Chapter 2 and the Tri- State Marine Corps League, serving as commander and quartermaster, respectively. In addition, the Purple Heart recipient is part of both groups’ honor and color guards.

“We go out about once a month and collect between 50 and 63 bags of groceries and deliver them to veterans and senior citizens who can’t get out,” Apgar said about his service with DAV Chapter 2.

OCCUPATION: Worked 23 years each as a volunteer firefighter and as a power plant operator.

CBP finds 28 undocumented immigrants lying on top of each other...