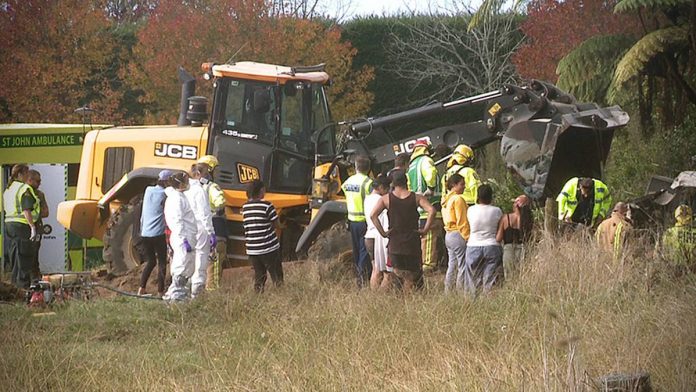 A crane, a farmer and his digger, and careful precision helped free a driver trapped after his legs were crushed under the weight of his crashed truck.

Kawerau Fire Station got a call around 9.30am yesterday about a rolled truck in a ditch near the intersection of State Highway 30 and Braemar Rd between Rotorua and Whakatāne, and the driver, the sole occupant, was trapped.

Kawerau Station Officer Craig Dempsey described it as the “longest, most extreme and complex rescue” he had been part of.

“You can imagine crushing a Coke can and having your finger in the middle of it and trying to reverse what’s happened.”

That was what the meticulous task of safely freeing the driver was like, Dempsey said.

“I’ve had it with some cars, but not with trucks, not to that extreme,” he said.

Two crews, one from Kawerau and another from Edgecumbe were among the emergency services working to free the man. A crew from Rotorua arrived later and helped clear the wreckage.

The conscious driver was trapped with the weight of a truck crumbled around his legs and wedged into a ditch on the driver side.

The ditch was filled with flowing water which covered the driver from the waist down.

The level of the water created visibility issues, Dempsey said, and a crane was brought in to partially lift the truck to allow the water to clear – just enough so they could see the what they needed to clear next.

“It was piece by piece, a little bit at a time, making sure we didn’t bring anything onto his legs … It took a long time.”

“With a truck, the strength and the metal is a lot more than a car, it just adds to that difficulty.”

A local farmer joined the rescue mission with his digger, using it to clear the bank around the truck.

A “reasonable crowd” had gathered throughout the operation, he said; some were family, others were there to see how they could help.

“There was a bit of emotion at times … some of the lads even came down to give us hand when we were digging away the dirt by hand.”

Dempsey said medics were monitoring the man throughout the entire process and helped with pain management.

“We persevered and got him out.”

Dempsey said the driver kept his sense of humour throughout the ordeal and worked with them through the whole process.

“He maintain his composure even though he was in a lot of pain and discomfort for a long period. His lack of complaints allowed us to focus on our job.”

The man was freed around 2pm, four-and-a-half hours after the first call.

Dempsey said the rescue would be talked about for reference in the future as a reminder of the difficulties faced and what could be learnt from it.

He hoped for a full recovery for the driver.

The man flown to Waikato Hospital and is currently in a serious condition in the High Dependency Unit.

Police were unable to name the truck company for privacy reasons.

A St John Ambulance spokeswoman yesterday said the man was transported by air in a critical condition.

A woman who did not want to be named drove passed the aftermath of the crash around 4pm and saw police and a heavy-duty construction vehicle.

“I was stunned to see the commotion.”

She drove the road often and said she was not surprised to see there had been an accident.

“The road is bumpy and there are a couple of corners that you need to slow down on.”

Emergency services at the truck crash were called to a second crash nearby involving a motorcycle about 1.10pm.

A police spokeswoman said police from the truck crash attended the second crash.