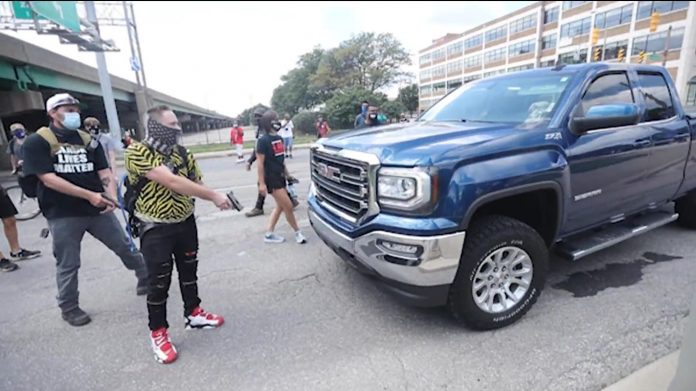 Corrections & Clarifications: A previous version of this story misstated the date of the protest. It was Friday.

Indianapolis police are investigating after two men drew handguns as they blocked a pickup truck driver during a Black Lives Matter demonstration near Downtown last week.

The incident, captured on video by an IndyStar photojournalist, happened about 1:45 p.m. Friday near North Meridian and 12th streets.

The video shows two men with handguns standing in front of a pickup truck during a protest march organized by Indy10 Black Lives Matter.

The video shows the men holding guns while standing in front of the truck.It also shows the truck driver trying to drive around the men before turning around and driving away.

Among others, WIBC-FM (93.1) talk show host Tony Katz shared the video on social media last week and called on IMPD to investigate the protesters.

“These two should be arrested for threatening the life of an innocent citizens,” Katz said Friday on Twitter. “They should be excoriated for their actions.”

Katz did not immediately respond Friday to IndyStar’s request for comment.

Sure. The second amendment remains. It allows innocent people to protect themselves and the ones they love. These two should be arrested for threatening the life of an innocent citizens. They should be excoriated for their actions. You should be disgusted by them.

IndyStar has been unable to identify the armed men or the driver. Indy10 Black Lives Matter did not immediately respond to requests for comment.

Indy10 Black Lives Matter said in a Facebook post Sunday that its security team members were protecting the marchers after the driver “attempted to hit us.”

“The past several months protest(ers) have either been killed or hit by cars, because of this reason we have armed security,” Indy10 Black Lives Matter said in the post.

“Our security was ready, with their guns low on the ground, but did not point it directly at anyone,” the group said on Facebook. “We don’t want to risk our people or protesters getting hurt or killed during one of our demonstrations.”

There have been at least three instances of drivers striking protesters in Indiana since June.

Similar incidents have happened nationwide, including a crash in Seattle that killed a woman on July 4.

Indy10 Black Lives Matter said in the Facebook post that members have been harassed in the days since the incident.

“It’s always a double standard,” the group said. “White racist are killing and hitting protesters and then get mad when (we) defend ourselves.”

“You can not drive a vehicle at or into a pedestrian even if they are blocking your mode of travel,” Crawford said.

“If you feel you are being unlawfully blocked, dial 911.”

Motorcyclist killed in collision with pickup truck on Taylorsville Road –...