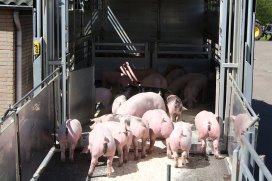 An estimated 1% of all market pigs are affected by transport-related losses. New research looks at the benefits of adding a ramp in nursery housing.

Transport – particularly handling and loading – is a stressful time for market pigs, making it an animal welfare issue. An estimated 1% of all market pigs are affected by injuries and other losses related to transport, which adds up to well over a million pigs worldwide. Aside from being an animal welfare issue, the effects of stress can also have a negative impact on pork quality. “Typically, pigs have little or no exposure to many aspects of loading, handling and transport before the time of marketing, including walking up and down ramps,” noted a group of US scientists and technicians at North Dakota State, Arkansas State and Iowa State Universities. They had published a new paper in the peer-reviewed journal Applied Animal Science.


Weaner pigs at the end of the ramp, about to enter a truck. Photo: Vincent ter Beek

The team added that having pigs that load and unload more quickly and easily facilitates “a decrease in the use of the electric prod and other types of rough handling.” It also means pigs will “spend less time in the confined trailer where there is a greater risk of injury, stress and higher ambient temperatures.”

By exposing young pigs to ramps, all this might be avoided. The researchers hypothesised that placing ramps in the nursery pen and having pigs use them at this stage would mean that at transport time, the pigs wouldn’t face a novel (and stressful) situation and therefore would load more quickly and efficiently. The study parameters assumed that five months later, the pigs would be able to remember ramps (and the experience of walking up and down them) from their nursery pen phase.

In the study, the research team randomly assigned 72 weanling crossbred hogs to 2 groups:

• one housed in a normal nursery pen; and

• the other in a nursery pen with feed provided on a platform at the top of a ramp.

The scientists observed feed and water consumption and interactions, they measured body weight. At transport, the research team again observed behaviour and measured the time each pig spent on the ramp to the truck.

In the nursery, the pigs from the ramp group consumed less feed than those housed in a normal nursery pen, but Average Daily Gain during the same period was the same. This finding is consistent with previous work reporting that ramp exposure did not have a negative effect on growth. The pigs being exposed to the ramp also displayed fewer aggressive interactions in the nursery compared with pigs that were held in the normal nursery pen.

At marketing, the hogs familiar with ramps, required about half the time to ascend the ramp into the truck than those unfamiliar with ramps (30 versus 59 seconds). In their paper, the research team concluded that “adding ramps to nursery housing is a simple and relatively inexpensive adaptation with the potential to improve the welfare of pigs during the nursery phase and at loading via a ramp for the market.”

The GMC Hummer Does One Thing Tesla’s Cybertruck Can’t • Gear...

Woman sues Boulder police over arrest, use of force