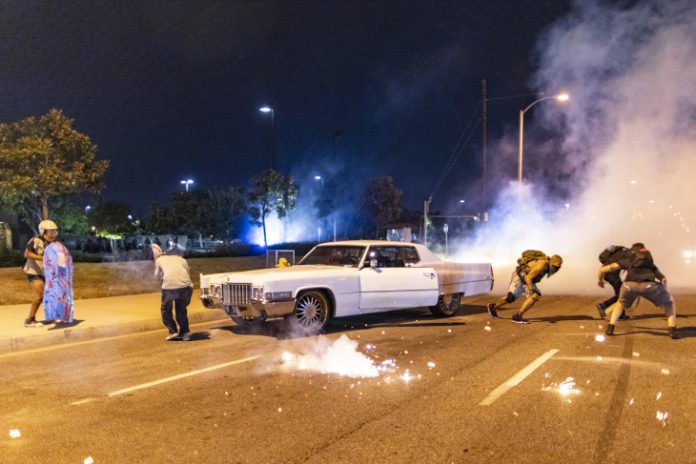 Saturday’s march for Dijon Kizzee, the cyclist killed by deputies in South L.A. on Aug. 31, started out under the blazing afternoon sun. Loved ones stood atop a flatbed truck parked in front of the L.A. Sheriff Department’s South L.A. station, fleshing out the picture of a caring, funny family man they said was missing from the law enforcement account of his last moments.

The protest ended about five hours later, the night sky lit up as deputies launched munitions and chemical irritants at protesters and journalists.

It’s not yet known what sparked the deputies’ actions. A public information officer said Sunday afternoon she was working on a statement.

What’s clear is that people were injured by so-called less-lethal munitions. They include photojournalists Brian Feinzeimer (who took photos for LAist) and Christian Monterros, both of whom were hit in the face by a chemical irritant. Feinzeimer also reports being hit several times by flash bang explosions.

Saturday’s violent turn of events ratchets up tensions between the sheriff’s department and those demanding the naming and prosecution of the deputies who fatally shot Kizzee.

Kizzee was riding a bike when two deputies said they stopped him for an alleged vehicle code violation that has yet to be detailed.

The department said when deputies caught up to a fleeing Kizzee, he allegedly punched a deputy and, according to the LASD, “made a motion” toward a handgun that he allegedly dropped during the scuffle.

At the rally before the march, pastor Eddie Anderson said that the deputies needed to be fired and prosecuted.

After the rally, protesters marched from the station to the 110 Freeway, where protesters shut some southbound lanes for more than a half hour.

The protesters’ interactions with the California Highway Patrol were comparatively without incident.

CHP officer Peter Nicholson said no arrests had been logged during the protesters’ shutdown of southbound lanes on the 110 from about 6:51 p.m. to 7:26 p.m.

Saturday’s event was organized by the Los Angeles chapter of Black Lives Matter, whose organizers repeatedly said they wanted to focus on Kizzee and his family.

Donnell Russell, Kizzee’s cousin by marriage, told LAist he would like to see the deputies who killed the 29-year-old cyclist named. But he also expressed a sense of futility

When a commotion was created by the barricade set up to separate protesters from the dozens of deputies lined up along the station, Black Lives Matter leaders ordered the crowd to move away. That’s when the march down Imperial Highway began to the 110, where they stopped traffic to bring attention to Kizzee’s story and a long-standing goal: defunding the police.