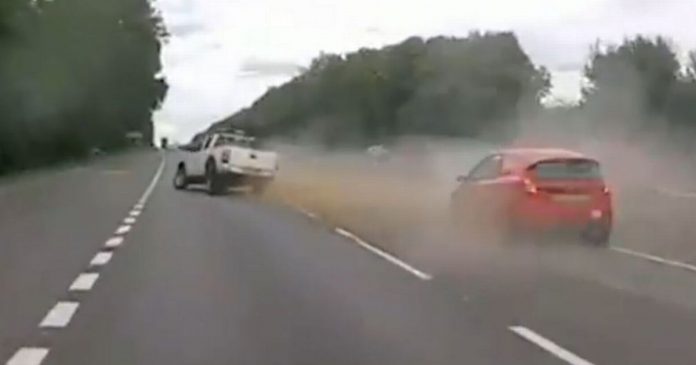 A driver had a lucky escape after his wheel flew of at 50mph on a busy motorway.

Aubrey Elliot was driving along the A1 in Peterborough in his Ford Ranger pick-up truck when the wheel came off.

The pick-up truck drifted across the carriageway and nearly hit another car before hitting the kerb on the hard shoulder, losing another wheel and crashing into some bushes.

The 67-year-old, from Gotham in Rushcliffe, said: “I thought there had been an explosion.

“I did not know what was going on but my front driver’s side wheel had flown off.

“I had to fight with the car to try to avoid clipping the other car or hitting the central reservation as I think I would have flipped over then.

“I managed to steer and use the handbrake to get back to the left then it veered onto the hard shoulder.

“The truck hit the kerb and my other front wheel flew off. I came to rest in some bushes.

“Within seconds there were two blokes banging on my window asking if I was okay.

“What that driver did was brilliant and could have saved me from being hit by another vehicle.

“When I told my daughter about it she contacted the truck driver and his pal by Facebook and called them heroes and she’s about right.”

The video will start in8Cancel

The incident happened at about 2.50pm last Wednesday.

Florin and his assistant driver Daniel Samoluk had been out delivering for JJ Foodservice, and were on their way back to the company’s warehouse in near Leicester.

Florin said: “I could see that the white truck in front was going to lose it front wheel so I slowed right down and put my hazard lights on.

“The trucks behind me also slowed down and put their hazards on.

“When it finally came to rest I parked behind it on the hard shoulder. Daniel jumped out to check he was okay and I followed. We gave him wheels back.

“It was quite dramatic and I am glad the driver is not hurt.

“It was nice when his daughter contacted us to call us heroes but I just did what any other responsible driver would have done.

“All is good. You can replace vehicles as they are just lumps of metal but human life is special. I am glad he is okay.”

2020 GMC Sierra AT4 is the sports car of trucks

At least 8 soldiers killed by suicide truck bomber in east...