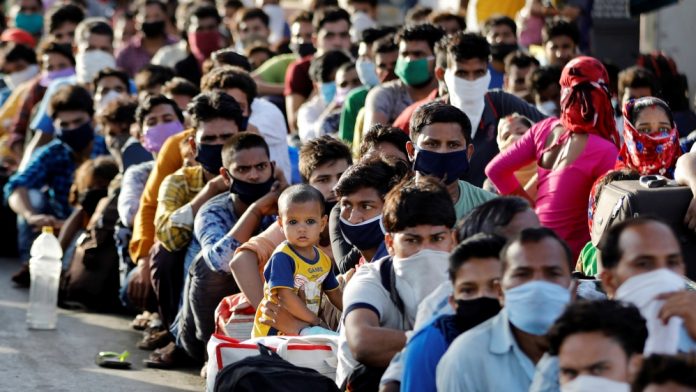 Here are all the latest updates:

“Today there are two zeros … thank you all Thais who have given their cooperation,” said Taweesin Wisanuyothin, spokesman for the Centre for COVID-19 Situation Administration.

From Sunday, shopping centres and department stores will reopen and a nighttime curfew will be shortened by one hour.

Meanwhile in Cambodia, all 122 confirmed patients have now recovered after authorities said the last infected person had been discharged from hospital. The country though will not be easing restrictions as the health ministry urged continued vigilance.

Hello, this is Virginia Pietromarchi taking over the live blog from my colleague Zaheena Rasheed.

I’m handing over the blog now to my colleague, Virginia Pietromarchi, in Doha, Qatar. Here’s a summary of this morning’s key developments:

At least 23 migrant workers were killed in India when a truck they were travelling in crashed into a stationary truck on a highway in northern Uttar Pradesh state.

Another 20 were injured in the accident, magistrate Abhishek Singh told The Associated Press news agency. The workers were on the way from India’s capital, New Delhi, to their villages in Bihar, Jharkhand and West Bengal states, he added.

In this still image taken from video, a police rescue team works to lift a truck at the site of an accident in Auraiya, Uttar Pradesh, India, on May 16, 2020 [ANI via Reuters]

Tens of thousands of migrant labourers have been returning from big cities to their villages after losing jobs because of the countrywide lockdown.

The president of the Australian Medical Association urged people to remain vigilant as Australia began relaxing a two-month lockdown with restaurants, cafes and bars re-opening in most parts of the country.

“If we do the wrong things, we risk undoing all the gains that we’ve made,” Tony Bartone said. “So, the message is, yes, appreciate all the efforts, appreciate the opportunity to release some of those measures, but let’s not have a party, let’s not go to town.”

New South Wales and Queensland states eased restrictions this weekend but Victoria, which is still struggling to curb the virus’s spread, retained most of its lockdown measures.

Australia has recorded just over 7,000 cases and 98 deaths.

The Italian government is easing travel restrictions imposed due to the coronavirus pandemic, allowing people to move freely inside the region where they live as of Monday, and between regions starting June 3.

The government decree also permits international travel to and from Italy from June 3.

Social distancing rules are being implemented in the sectors of the economy that have reopened, including factories and some businesses. Schools remain closed and crowds are not permitted, though people will be allowed to attend Mass in churches with some restrictions starting next week. 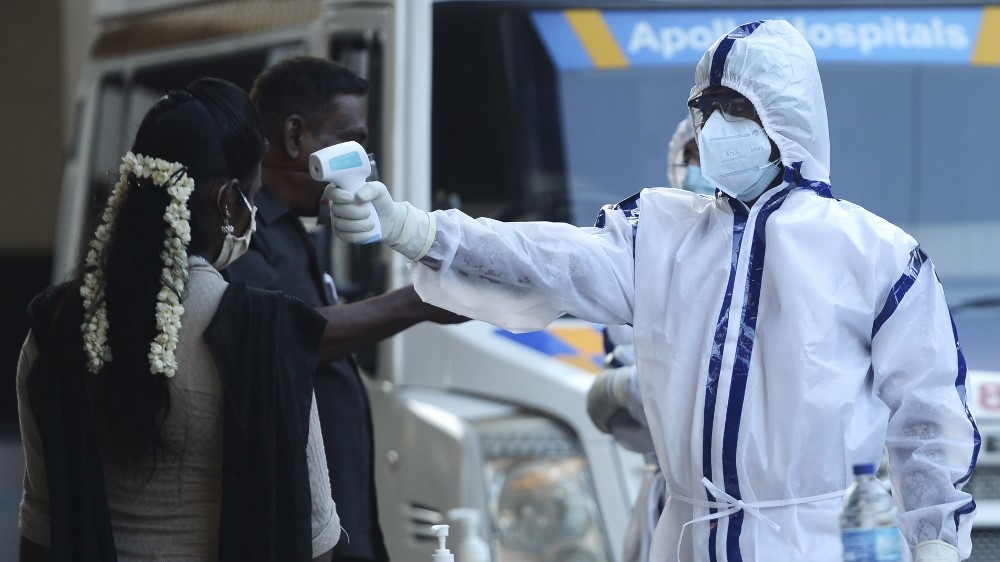 A health official checks the body temperature of passengers as they arrive to board a special train to New Delhi in Chennai on May 15, 2020 [Arun Sankar/ AFP]

Prime Minister Narendra Modi’s government is due to announce this weekend a decision whether to extend the country’s 54-day-old lockdown.

Authorities have so far tested 46,000 people after health workers detected a slew of infections linked to clubs and other nightspots in Seoul’s Itaewon entertainment district.

“Despite massive testing, there seems to be no trend of the rapid virus spread tied to the Itaewon outbreak,” said Yoon Tae-ho, a senior health ministry official. “If we pass this weekend well, we expect the Itaewon-linked spread to come under the control of quarantine authorities.”

South Korea’s Centers for Disease Control and Prevention reported 19 new cases of the coronavirus on Saturday. Nine were linked to Itaewon and the rest involved passengers arriving from abroad.

The Trump administration will “agree to pay up to what China pays in assessed contributions” to the WHO, Fox News says, quoting from the letter.

BREAKING: The Trump Admin is on the brink of resuming U.S. funding of the World Health Organization. pic.twitter.com/NCm2BZctRc

Trump suspended US contributions to the WHO on April 14, accusing it of promoting China’s “disinformation” about the coronavirus outbreak. The agency denies the claim.

The US was the WHO’s biggest donor. If the US matches China’s contribution, as the Fox report adds, its new funding level will be about one-tenth of its previous funding amount of about $400m per year.

A Brazilian rights group says the coronavirus has hit 38 indigenous groups in the country and is spreading to Indigenous territories “with frightening speed”.

A survey by the Brazilian Indigenous Peoples’ Association (APIB) finds 446 cases of the new coronavirus and 92 deaths among the affected groups, mainly in the Brazilian Amazon.

The grim news came a day after the Indigenous community of Parque das Tribos, outside the northern city of Manaus, held a funeral for its chief, Messias Kokama, who died of COVID-19.

The United States House of Representatives narrowly passed a $3 trillion bill aimed at salving the heavy human and economic toll of the coronavirus pandemic.

The bill, crafted by House Speaker Nancy Pelosi and her fellow Democrats, passed mostly along party lines in a 208-199 vote.

The enormous measure would cost more than the prior four coronavirus bills combined. It would deliver almost $1 trillion for state and local governments, another round of $1,200 direct payments to individuals and help for the unemployed, renters and homeowners, college debt holders and the struggling US Postal Service.

But Republicans, who control the Senate, have promised it will be “dead on arrival” in their chamber. 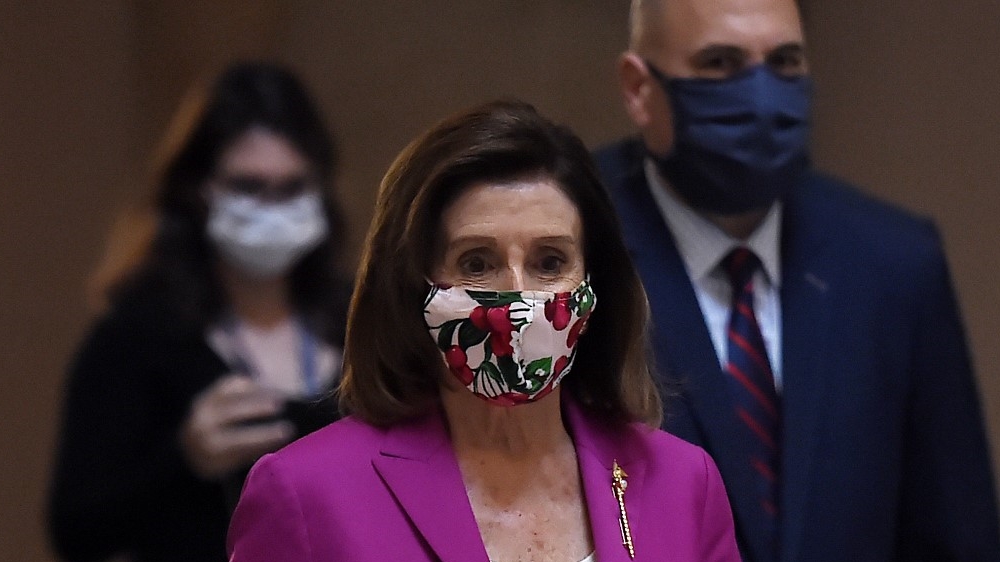 House Speaker Nancy Pelosi walks past the Statuary Hall at the US Capitol on May 15, 2020, in Washington, DC, the United States [Olivier Douliery/ AFP]

Robert Redfield, director of the US Centers for Disease Control and Prevention, says forecasting models indicate the number of coronavirus-related deaths in the US will increase in the coming weeks.

CDC tracks 12 different forecasting models of possible #COVID19 deaths in the US. As of May 11, all forecast an increase in deaths in the coming weeks and a cumulative total exceeding 100,000 by June 1. See national & state forecasts: https://t.co/PI1AtLCCmt pic.twitter.com/iylBnom5U0

Canada’s largest airline said it plans to lay off at least 20,000 employees because of the coronavirus pandemic.

Air Canada said the pandemic has forced it to reduce scheduled flights by 95 percent, and it does not expect normal traffic to return anytime soon.

“We therefore took the extremely difficult decision today to significantly downsize our operation to align with forecasts, which regrettably means reducing our workforce by 50 to 60 percent,” the airline said in a statement.

LATAM Airlines said it would lay off 1,400 employees in Latin America, blaming a drastic slump in business due to the coronavirus pandemic.

“The effects of COVID-19 are profound and make reducing the size of the LATAM group inevitable to protect its sustainability in the medium term,” said Roberto Alvo, executive director of the Chilean-Brazilian carrier.

The jobs will be cut from operations in Chile, Colombia, Ecuador and Peru.

The new infections brought confirmed coronavirus cases in the country to 45,032. The death toll rose by 290 to 4,767. Mexico’s highest daily toll was on Tuesday, when health authorities reported 353 fatalities.

“We are at the moment of the fastest growth in new cases,” said Assistant Health Secretary Hugo Lopez-Gatell. “This is the most difficult moment.”

Brazil’s health ministry confirmed 15,305 new cases of the novel coronavirus on Friday in a record for a 24-hour period.

It also reported 824 related deaths. Brazil has registered 218,223 confirmed coronavirus cases since the start of the pandemic and 14,817 deaths.

The US House of Representatives approved a historic change to its rules allowing legislators to vote by “proxy” from remote locations temporarily.

The change, proposed by Democrats and passed in a 217-189 vote, upends more than 200 years of precedent in Congress. Proxy voting has been allowed before within committees but not for votes in the full House or Senate.

Under the new rules, House legislators will no longer be required to travel to Washington, DC to participate in floor votes. They will be allowed to vote by proxy – assigning their vote to another legislator who will be at the Capitol to cast it for them. Eventually, a provision allows for direct remote voting, once the technology is approved.

Just as important, the House committees – the bread and butter of legislative work – will be able to fully function remotely.

The new rule will remain in place only for the duration of the coronavirus crisis.

You can find all the key developments from yesterday, March 15, here.