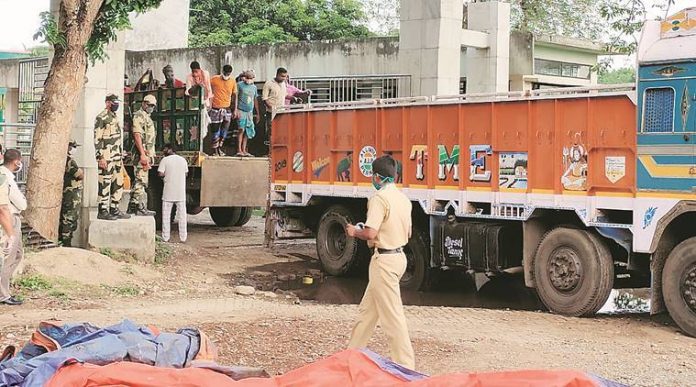 India’s largest land port resumed operations on Thursday, over a month after it shut down following PM Narendra Modi’s “Janata Curfew” call to contain the COVID-19 pandemic and the subsequent nationwide lockdown.

Though almost 2,100 trucks have been stranded at Petrapole in the Bongaon area of North 24 Parganas district since March 22, only two trucks carrying jute and maize seeds from India were unloaded at the gate at zero point because of fears about the pandemic.

Many clearing agents, labourers and drivers are scared to step foot in the neighbouring country, and the local TMC leadership has also warned of dire consequences if goods are allowed to move.

“There was a letter from the district magistrate that asked us to facilitate the opening of the land port,” said Kartik Chakraborty, the secretary of Petrapole Clearing Agents Staffs’ Welfare Association.

“We are all living under fear since neither we nor the Bangladeshi side have PPEs [Personal Protective Equipment]. Clearing agents exchanged documents at the gate and labourers from Bangladesh unloaded the goods. What if someone gets infected with COVID-19?” he asked.

Earlier, 500 to 550 Indian trucks used to enter the port area, and about 100 to 150 Bangladeshi vehicles were permitted to do the same. According to sources, from now only trucks from India will be unloaded at the zero point.

“Now we are positioning our vehicles at the zero point gate and Bangladeshi labourers are unloading it. We hope everyday eight to 10 trucks are unloaded. There are over 2,100 goods-laden trucks stuck in our side. So, it will take a long time,” said Chakraborty.

The massive cargo pile-up started as soon as the lockdown was declared last month. Indian truck drivers on the Bangladeshi side — Benapole — were told to immediately return, leaving their vehicles. The same instructions were issued to Bangladeshi drivers from the other side.

At present, 100 Indian trucks are in Bangladesh and 30 vehicles from the other side are in India. Since the Bureau of Immigration and the Border Security Force are not allowing the drivers to go cross over on foot and unload the cargo from their vehicles, truckers are not ready to move unless those vehicles are offloaded.

Exporters had been urging both the Centre and the state government over the past month to open the port. The demand was opposed by clearing agents, workers, and the local TMC leadership, all of whom called for the checkpost to remain shut because of the pandemic. They also sought the presence of proper medical teams and protective gear for everyone.

Eventually, last week the Centre agreed to open the port, with Union Home Home Secretary Ajay Bhalla writing to state Chief Secretary Rajiva Sinha on April 24 about the government’s approval. Five days later, the DM wrote to the manager of the Petrapole port authority, asking the official to ensure maximum social distancing during trade at the checkpost.

For all the latest Kolkata News, download Indian Express App.

Report: Civic engagement more important than ever for the region