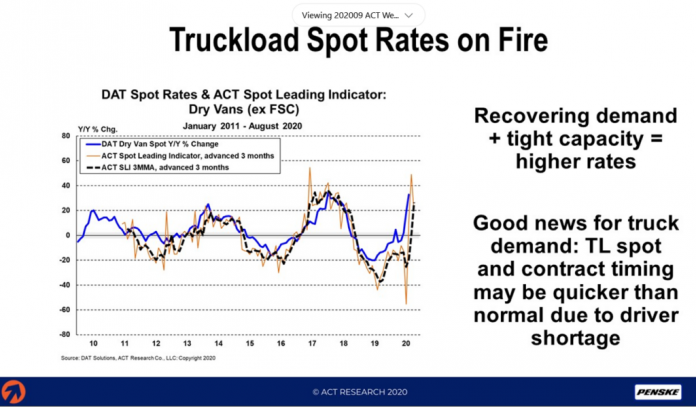 WASHINGTON, D.C. – Covid-19 brought on the worst recession in U.S. history, but the recovery is underway and economic conditions should return to pre-Covid levels by late next year.

Jim Meil, industry analyst and principal of ACT Research, pointed out the economic recovery has been strong in the third quarter, after the bottom fell out and the U.S. posted its worst Q2 ever. The recovery is taking place around the globe, with exceptions being Japan and Mexico. However, until a Covid-19 vaccine is discovered, or herd immunity achieved, Meil said “the risk remains high going forward.”

The freight markets were somewhat protected from the economic disaster, as goods continued to move while the services sector tanked.

Overall consumer spending fell about 20% in April, but has climbed back to just 4.5% off pre-Covid levels from January. In fact, durable goods spending on products such as cars and auto parts are actually now above January levels, Meil said, as are spending on furniture, appliances and household goods. But spending on transportation (ie. flights) and recreational services (concerts, bars, etc.) is still down 25% and 36%, respectively.

“The big story here is, if people are spending their money on stuff instead of services, that actually goes into the sweet spot for truck transportation,” Meil pointed out.

Tim Denoyer, ACT Research’s vice-president and senior analyst, pointed to a bright future for trucking in the near term. He said dry van spot market rates are at record highs, even though volumes are flattish year-over-year. Improving rates are being driven by a tight driver market.

“There are too many drivers on the couch,” he said, pointing to generous federal government subsidies that, when combined with state unemployment benefits, could see the unemployed fetching about $1,000 a week. That has disincentivized some drivers from returning to work, and the shortage is exacerbated the closure of training schools that churn out new CDL holders, and retirements by older drivers looking to protect their health. Denoyer said it could be 2021 before drivers return en masse.

In August, dry van spot market rates in the U.S., net of fuel surcharge, were up 33% year-over-year, and up by about 39% so far in September.

“The short-term outlook is very positive,” Denoyer said. This should eventually translate into higher contract rates, as well.

“If the economy doesn’t fall apart from here, this is an extremely bullish sign for carrier profitability,” Vieth said.

Citing rail volumes, Denoyer said the freight recession that stretched back seven quarters is ending. Import volumes at U.S. West Coast ports are high, and intermodal volumes are strengthening as those goods are pushed inland. Intermodal spot market rates have gone “parabolic,” said Denoyer, with rail capacity effectively sold out for the remainder of the year, which should further boost trucking rates through the holiday shipping season. Retail inventories are being replenished, and for them to return to traditional levels would require about US$200 billion in goods to be restocked, or about a 3% boost to freight volumes over the next six months.

Vieth pointed out Class 8 order activity is picking up, but there remain about 5% more trucks in the market than needed to meet current freight demands. A lack of drivers is what’s driving the capacity shortage and forcing up rates.

“There’s an extremely strong case to be made for the driver shortfall to continue through 2021,” Vieth said. ACT is forecasting the North American Class 8 build to total 250,000 units in 2021, reflecting a more normalized year.

Rosensweig said the U.S. was right to reopen its economy, as Covid cases and deaths are trending down. But the jobs market was decimated in April, and will take some time to fully recover, he acknowledged. Prior to the pandemic, the U.S. workforce suffered about 220,000 layoffs per week. That surged to a new record of seven million in a single week as the economy was shut down.

There have been more than a million new jobless claims filed in 22 of the past 24 weeks.

“The last thing we need now is a further lockdown,” Rosensweig said. He said the job losses wiped out by Covid won’t fully return until mid-2022.

But Rosensweig remained upbeat about the potential of the U.S. economy, citing greater productivity and favorable demographics. He lauded the Federal Reserve for its “aggressive and intelligent” monetary and fiscal policy, which assured low interest rates are here to stay. He suggested manufacturers take advantage by locking in low long-term interest rates.

“We had to get this economy going, and we did,” he said. “Don’t make plans around the economy going bonkers, but steady growth for the next few years will bring things back without causing inflation and that may be the best situation of all, an economy that grows more steadily.”

Diesel and oil will be around for awhile yet: Energy analyst...