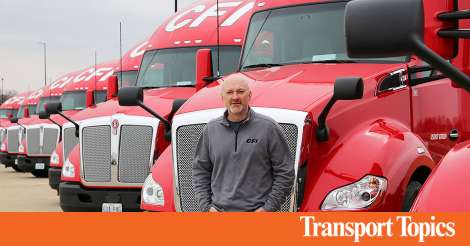 [Stay on top of transportation news: Get TTNews in your inbox.]

Driver turnover, deadhead miles and long waits at loading docks — these are all intractable issues that sap trucking industry efficiency.

Some motor carrier executives, freight brokerages and others in the industry are seeing the development of business models that address these problems by reshaping how cargo is shipped.

They are looking at various routing models that are similar but go by multiple names, including hub-to-hub, dock-to-dock, drop-and-hook, relay and pony express. Such routes often allow truckers to drive shorter distances and spend less time waiting for loads at docks.

“One of the secret sauces to lowering turnover today is to get drivers home more often. What we try to do is set up relays as often as possible so that we keep trucks within a region,” said John Wilbur, CEO of Phoenix-based Roadmaster Group.

Wilbur is in the initial stage of making these relay routes a significant component of Roadmaster’s business.

A truck and trailer might start out at the Port of Oakland in California and drive to a transfer location or hub in Reno, Nevada, about 215 miles to the east. The driver will trade loads with a tractor coming from Salt Lake City, another 500 miles to the east. The next stop for the trailer might be Laramie, Wyo. At each transfer point, the driver traveling east picks up a trailer and heads back west.

This system would allow for drivers to be home far more nights a week, Wilbur said. They won’t be launching on a 2,000- to 3,000-mile transcontinental journey and return trip.

“You can be out for three to four weeks at a time. That’s a difficult work style,” he said.

However, Wilbur noted, there are hurdles to building such a system.

“You need a balance going east and west so that you don’t get deadhead miles,” he said.

The same number of trucks heading in one direction has to offset the vehicles coming back. Pricing becomes inconsistent because there can be more demand heading out of big port facilities and related distribution centers than there is returning to those regions.

Wilbur is starting with a couple of lanes, trying to find steady customers in each direction and figuring out how to overcome the obstacles to creating a linear network.

This will take time to mature, he said.

GPS makes it easier to track the driver, tractor, trailer and load. That provides the data needed to make drop-offs and transfers. Likewise, digital innovations make load matching easier. That can help balance loads going in each direction, he said.

“It makes it a bit harder for fleets because this takes more management, but you are driving trucks that tend to be fuller. That helps with congestion and with the fuel burn,” Roeth said.

Other data indicates that the use of regional hauls is picking up steam, said Timothy Denoyer, vice president and senior analyst at ACT Research. In March, for example, the industry ordered 3,900 Class 8 tractors. The vast majority — 3,300 — were day cabs, he said.

One example is an operation maintained by sibling automakers Hyundai and Kia in the Southeast. Hyundai Motor Manufacturing Alabama makes engines at an auto assembly plant in Montgomery, Ala. It trucks the engines about 80 miles northeast for use by a Kia auto factory in West Point, Ga. Another Hyundai division at that plant makes transmissions, which are shipped in the same trucks back to Montgomery for assembly into Hyundai cars and SUVs.

“Day cab work is much more attractive to a driver because you are home every night. It speaks to the sense of building a supply chain that is durable,” said Ken Adamo, chief of analytics at DAT Solutions.

“If you can go out 450 miles, make your drop, and come back fully loaded, it’s better than acting like a pingpong ball driving all over the country,” Adamo said.

NACFE’s Roeth noted that drop-and-hook operations are increasing. In those operations, a trailer is left at a facility for loading or unloading while the tractor hooks up another trailer for a return trip or the next leg of a route.

With the Convoy shipper platform, shippers get instant upfront pricing, can book shipments with just a few clicks, and receive GPS tracking from start to finish.

Digital freight-matching company Convoy is investing heavily in equipment and technology to make such systems easier. The company is expanding its Convoy Go marketplace that allows carriers and owner-operators to book and pick up preloaded trailers.

Convoy has acquired a fleet of thousands of trailers and uses an algorithm to predict where and when they will be needed, said Tito Hubert, product lead for Convoy Go. It stages trailers at shippers’ facilities nationally.

The system creates efficiencies for both carriers and shippers, Hubert said.

A shipper can preload a trailer on its own schedule and leave it in a yard next to its facility for a driver to retrieve. That often works better than staging cargo on a loading dock and waiting for a driver to arrive, creating a delay.

“There doesn’t need to be an appointment for the carrier and the shipper to meet to do the handoff,” Hubert said.

The trailer can be collected during a window that extends for many hours.

“We are trying to create routes for carriers that can be full as much as possible,” Hubert said.

Convoy, for example, has loads from a shipper for the Los Angeles-to-San Francisco haul and matching loads that head back down to Southern California.

“A driver can grab a trailer in San Francisco and come back to L.A. It keeps them full and they don’t need to stay on the road for a long time,” Hubert said.

Battery-electric and hydrogen fuel cell trucks are just in pilot programs now, but their use is expected to grow due to a combination of environmental regulations and operating costs that are expected to soon rival conventional diesel trucks. Roeth said these zero-emission vehicles will need charging and fueling infrastructure that could be concentrated at distribution centers and transfer points in a hub or relay pattern.

A Shift in Driver Preferences

While the industry is moving toward more hub-to-hub, hub-and-spoke and relay freight, many carriers will mostly stick to the traditional longhaul lanes for now, depending on their customers and business model, said CFI President Greg Orr.

COVID-19 has placed significant strain on many freight networks. So how are third-party logistics providers adapting to meet these challenges? Host Seth Clevenger chats with two 3PL executives who have had firsthand experience contending with this crisis. Hear a snippet, above, and get the full program by going to RoadSigns.TTNews.com.

CFI, a truckload carrier based in Joplin, Mo., doesn’t operate in as populated or dense markets as many of its competitors. The motor carrier’s length of haul remains about 800 miles.

But Orr said such long routes are only a good fit for certain drivers, and he worries that population is declining as truckers age and retire.

They are willing to be gone a few nights a week, or maybe alternating nights, but they don’t want to drive across the country.

CFI is working to put those drivers into markets like Dallas, where they can embark on shorter hauls to other cities in the state or to the Midwest. They might drive a certain distance and then transfer the load to a longhaul driver to take it to the Northeast, Orr said.

Orr said he thinks the trend toward hub-to-hub, relays and shorter routes will pick up speed as older drivers retire and trucking networks become denser.

Three years ago, 55-60% of CFI’s business was located in what it considers its prime zones. That’s now approaching 84%, making it far easier for the carrier to match loads and manage the business.

“In another five to 10 years we will see a different network and trucking environment than what we see today,” Orr said.