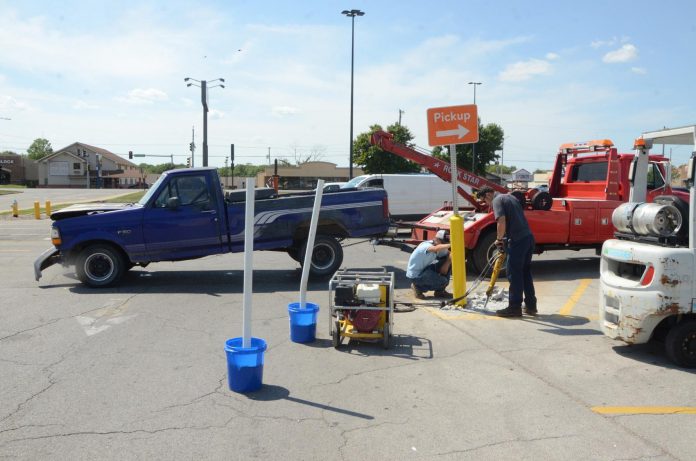 PITTSBURG—A yellow pole at the south side of the Walmart Supercenter parking lot in Pittsburg that became notorious after multiple collisions with it by vehicles driving through the lot was removed August 21, the day after it was hit yet again. It remains unclear whether the pole will be relocated or permanently removed from the lot.

Before its removal the Pittsburg Walmart pole, bent out of shape after numerous collisions, developed a cult following. A Twitter account, @pole_walmart, and two Facebook groups — “Pole of shame / Pittsburg walmart,” with well over 1,000 members, and “Pittsburg Walmart Pole,” with more than 6,000 — were created in dedication to the pole.

The pole’s former location can be found on Google Maps — separately from the Walmart itself — where several photos of vehicles that have fallen victim to it can be viewed. Before it was removed Friday two smaller white poles in blue buckets were placed alongside the main yellow pole, apparently to warn drivers that there was a pole nearby.

It is unclear how many times vehicles struck the pole. Lt. Ben Henderson of the Pittsburg Police Department said Friday that eight incidents had been reported between March and August of this year, but that it was “entirely possible” that there had been more. Followers of the pole on Facebook put the total much higher, ranging from twice to more than four times as many.

On Thursday, the pole claimed yet another victim.

“She was paying attention, trying to avoid the other car that’s parked over there that was totaled from hitting the pole,” said Malloree Buck of Pittsburg, whose 17-year-old daughter hit the pole. The other totaled vehicle, a Ford F-150 pickup truck that had been sitting in the lot for more than a week, was towed away Friday.

“It’s crazy how many cars have hit it,” Buck said. “It can’t be every driver in the world that’s a bad driver, it has to be something wrong with the pole I think.”

As rumors began circulating that Walmart had plans to remove or at least relocate the pole, a Change.org petition was created — and gathered nearly 600 signatures as of Friday afternoon — to keep the pole where it was. “This pole has entertained a lot of us and there is a reason to keep it (to protect cars) from getting hit,” the petition noted.

Back in May, the Pittsburg Police Department weighed in on the controversy then already surrounding the “vicious pole,” as Facebook user Brian Schulz described it.

“Just a quick safe driving reminder, the yellow pole in the Walmart parking lot doesn’t jump out into traffic,” the PPD noted in a Facebook post. “Please be cautious as you drive through the parking lot. The pole that has been struck numerous times will appreciate it!!!”

Several others commented that the pole was “hilarious” or provided “entertainment.” Some, however, offered more serious reasons to keep the pole.

“The pole needs to stay. It’s a safety issue to remove it. If it’s not this pole, it’s a child,” petition signer Rusty Zimmerman wrote. “If hitting a pole is a wake up call to pay attention while driving that costs no lives with only autobody work and a bruised ego, then this pole is doing a great public service. Hit a pole; not a child.”

Though the Walmart pole has now been removed from the spot where a multitude of vehicles crashed into it, its fate remains unclear. It is possible it will be relocated. At least one man driving through the parking lot Friday offered to buy it from the workers who were digging it out of the ground.

Walmart did not respond to multiple requests for comment on plans for relocating the pole, its social media following, or the petition to save it.

How online platform is helping to unlock truck delays across borders