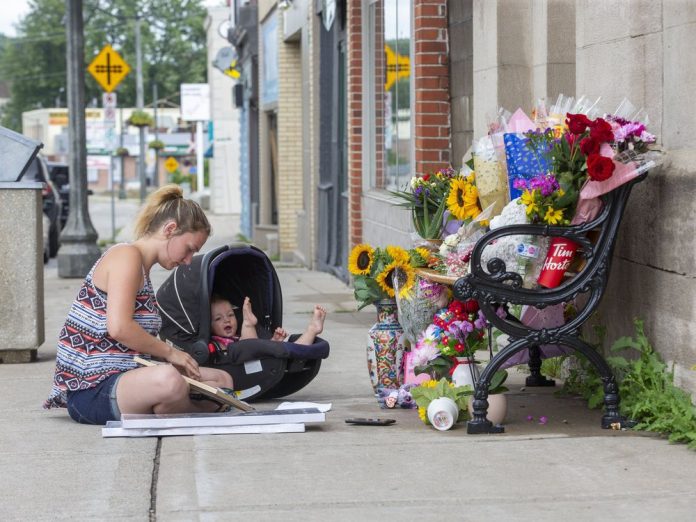 With seven-month-old daughter Abigail at her side, Destiny Fick fills a frame with photos of her cousin Ashten Elizabeth Fick before adding it to a memorial for the mother of three on Thames Street in Ingersoll on Sunday. Ashton was struck and killed by a transport truck as she crossed the street on Friday. Derek Ruttan/The London Free Press/Postmedia Network

Ashten Fick will be remembered by friends and family as a bubbly, colourful young woman who loved being a mom.

“She was one of my closest cousins. We were as close as sisters.” Destiny Fick said.

Ashten, 22, was killed Friday afternoon when she was hit by a transport truck while crossing a downtown Ingersoll intersection with her children.

Destiny said Ashten’s two youngest children, a three-year-old and a three-month-old infant, were with her at the time of the collision but were largely unharmed.

The baby, who Ashten was pushing in a stroller at the time of the crash, was taken to hospital with minor injuries, the Oxford OPP said Friday.

“She protected them. I want to make sure the world knows what a great mom she was, and what a hero for saving her kids,” Destiny said.

Destiny, just two years her cousin’s senior, said they grew up together, often spending hours colouring and playing outside as kids as their dads hung out. Ashten would be drawing every chance she got. Destiny said her cousin was constantly being creative.

As they got older, the two cousins enjoyed the  Ingersoll school dances, where they’d meet even though Destiny went to a different school.  The cousins stayed close with near nightly coffee dates at the local Tim Hortons, even as both young women became mothers.

“Before COVID, we’d sit for coffee almost every night. We’d sit and talk about how the day went (while) the kids would play,” Destiny said.

Ashten loved the iced cappuccino , Destiny said, and the restaurant staff always greeted her with a smile when she came in.

As an adult, Destiny said Ashten loved to colour her hair, another sign of her colourful personality. Though her hair had been shades of blue, green and purple in the past, Destiny said neon pink was her cousin’s favourite.

No matter what Ashten went through, Destiny said the woman was a fighter – a strong and protective mother who would go without if it meant her kids had everything.

Since Friday, Destiny said she’s been spending time with family, and watching a memorial of flowers, stuffed animals and photographs that’s sprung up in downtown Ingersoll in memory of her cousin. About every half hour, someone else brings flowers to the growing memorial, many offering remembrances of the “great girl” they all knew.

“I want to make sure everyone knows how strong of a mother she was, what a fighter she’s always been, and that she cared about everyone,” Destiny said. “She was my hero.”

Ashten’s three children are being cared for by family, Destiny said.

On Sunday, the Oxford OPP issued a plea for business owners in the area of Thames and Charles street to check surveillance cameras for footage of the collision, and ask anyone who witnessed the crash to come forward to police.