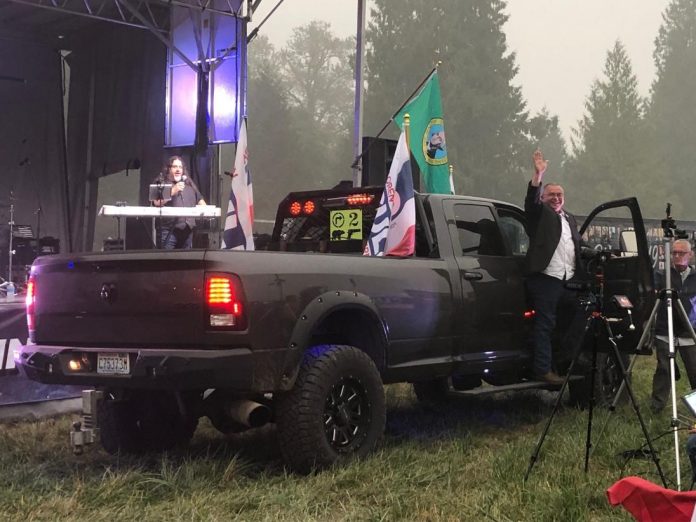 Arriving in a large pickup truck as a rock band played onstage, Culp spoke to an enthusiastic outdoor crowd of about 500.

Amid wildfire smoke that pushed air-quality to hazardous levels in Southwest Washington, Culp began with a broadside against Inslee’s management of state forestlands and the governor’s scientifically-backed view that climate change is a driver of catastrophic wildfires.

“Remember back when a lot of us were growing up, we managed our forest lands like we should,” Culp said. “We thinned them. We logged them. We replanted them and cleared the carbon off the forest floor. We cared for them as a natural resource.”

Culp is the current police chief of Republic, a small city in northeast Washington. He gained national attention in 2018 when he announced he would not to enforce ballot Initiative 1639, which among other things raised the minimum age for purchasing semiautomatic rifles.

Sunday, Culp cited that as an example of how he would govern with strict adherence to the state Constitution.

“We all know what the Second Amendment says, but the Washington State Constitution is even more explicit,” Culp said. “Article 1, Section 24 says the right of an individual citizen to bear arms in defense of himself or the state shall not be impaired. I knew it was unconstitutional. I took an oath of office to uphold and defend the Constitution.”

Sunday’s rally began with a rock concert. Dozens in attendance waved flags in support of the United States, President Donald Trump and Culp.

While support for Trump was ubiquitous at the rally, Culp spoke almost exclusively about issues relevant to Washington. Among those was the homeless crisis in Seattle.

“To the current office holder, it’s all about homes,” Culp said. “We need to spend millions, probably billions of dollars to build all these homes. … I worked three years as a narcotics detective. I’ve dealt with people on the street. It is not all about homes. It’s an addiction and mental health crisis we’re facing. Until we focus on that core issue, it’s not going to get fixed.”

Culp also slammed the state’s response to the COVID-19 pandemic, in which he accused Inslee of choosing “winners and losers.”

“I call it the ‘stay home, go broke’ order,” Culp said. “If you had an abortion clinic, a pot store or a big box store, you could stay open. But if you had church, a gun store, a mom-and-pop cafe or a barber shop, you had to shut down. It’s like he thought the virus knew which buildings it could go into and which it couldn’t.”

At the end of his 40 minute speech, Culp spoke about his experiences during military service in South Korea and a call to come together as Americans.