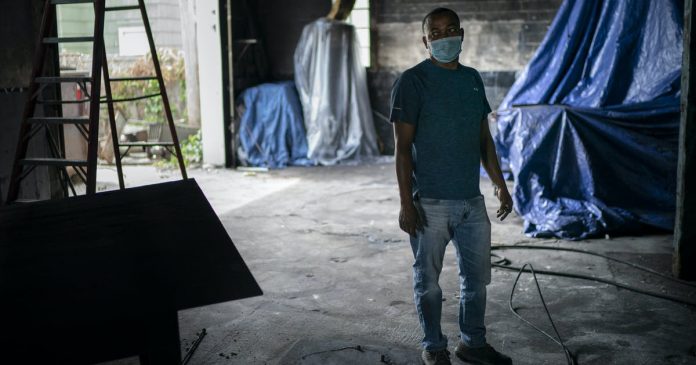 Soot darkens the letters on the sign for 7 Mile Fashion, months after rioters torched the Lake Street shopping center where it stands.

The store that thrived for 24 years is now a mass of debris. The buildings on either side are boarded, the ruins cordoned off by a chain-link fence.

The Ahn family that owns 7 Mile Fashion estimates they lost $2.5 million here and at two other stores attacked on Nicollet Avenue and W. Broadway. Yet insurance will cover just $600,000 because they had not updated their policy in many years.

Private insurance won’t come close to paying the cost of rebuilding what was lost in the riots following George Floyd’s death.

Though Gov. Tim Walz has estimated that total losses will exceed $500 million, insurance companies have informed the Minnesota Department of Commerce that they will be covering a maximum of $240 million in riot-related damage. In the 5-mile stretch of Minneapolis that sustained the heaviest destruction, uninsured losses among local small-business owners are at least $200 million, according to the Lake Street Council.

“It is hard for us to be underinsured,” said Gina Ahn. “That’s just the problem with small businesses.”

More than half of 421 small businesses applying to the council for grants following the riots had no insurance at all — following a similar pattern identified by the Du Nord Foundation, which is distributing more than $750,000 in grants to minority-owned firms. The others were “severely underinsured,” said foundation board member Tina Rexing.

There are many reasons insurance won’t fully cover buildings ravaged by riots.

In some cases, owners let their policies lapse when COVID-19 struck and the state ordered them to close, erasing the source of income they needed to pay their premiums. Others bought bare-bones coverage because that was all they could afford. Insurance agents said it typically costs 25% to 50% more to buy enough coverage to pay the actual cost of rebuilding vs. policies that cover a property’s current value. Older buildings are usually worth far less than they cost to replace.

A bigger problem is availability. Insurers often won’t cover older structures because they have not been updated with new roofs, plumbing or electrical systems.

“I’ve seen companies say, ‘I’m not going to write this business at all, because the risk is so high,’ ” said Loretta Worters, a spokeswoman for the Insurance Information Institute, a trade group in New York.

Flora Westbrooks said she dropped her coverage early this year because “I had no money to pay.” It cost $1,200 monthly to insure Flora’s Hair Design, Olympic Cafe and a third building she rented to MetroPCS. Months later, arsonists set fire to her W. Broadway block. Westbrooks lost everything.

“Help us, Mayor Frey,” she said, her voice strained with anguish. “Help us, Governor Walz. Help our community. Put us back together.”

With the private market insufficient to pay, Democratic state legislators proposed $300 million for riot-damaged businesses. Republicans have also pledged aid, but they have balked at the costs and suggested delaying help until they learn how much insurance will cover. DFL Rep. Mohamud Noor, who represents one of the hardest-hit Minneapolis neighborhoods, said the Department of Commerce’s report answers that question.

“Many business owners are starting to give up,” Noor said. “They need immediate help.”

Smoke still lingers at Gemechis Merga’s charred auto shop on Nicollet Avenue, where he recently filled a fourth dumpster load with heaps of wood and mangled equipment. The remains of his transmission flushing machine sit nearby, along with three auto lifts that will cost $15,000 to replace and install. Wires hang out of a tow truck that rioters set on fire; busted glass scatters over the seats and hood. The windows that Merga replaced for $12,000 weeks before the riots are broken and boarded.

It’s Saturday morning, and Rongo’s Auto Repair would normally be bustling. But his only visitor is a friend helping wash the soot off the walls.

Like many business owners hurt by the riots, Merga is an immigrant. He came from Ethiopia 15 years ago, starting as an auto shop employee and saving up for his own business. He opened Rongo’s in 2015.

While damages to the contents of his building total $230,000, his policy will cover a maximum of $110,000. The insurer is willing to pay an additional $260,000 for losses associated with the building itself, Merga said, but he believes “that’s a way underestimate,” and he’s covered for more than twice that.

He pays about $3,500 a year to insure the business and property, on top of $10,000 in property taxes and $2,700 for tow truck insurance. “There’s a lot of bills to pay. … It’s never been easy,” Merga said. Yet the bigger loss, he added, “is the customer knows the place is burned and not in business anymore, so a year … from now I have to go around and say, ‘I’m back to work, come back.”

Near the corner of Lake Street and Minnehaha Avenue, where unrest exploded as protesters seized the Third Precinct police station, Ade Alabi said he had just enough insurance to cover his outstanding mortgage on a building that housed the Town Talk Diner and six other tenants. He bought it for $2.8 million in January and paid nearly $4,000 in monthly premiums.

“I would have been losing money if I had gotten more insurance,” said Alabi.

He expects to collect $1.3 million, but that won’t be enough to cover his rebuilding costs, estimated at $9 million. Alabi said he is talking to his tenants to see if they could pool their insurance proceeds and rebuild the center together. But he said he may have to “walk away” if the state doesn’t cover a significant portion of construction expenses.

“If you want the businesses to come back, you have to help,” Alabi said.

For some entrepreneurs, their day-to-day operations were so demanding that they lost track of the details of their insurance policies. Solomon Haile and his wife Rekik Abaineh opened Bolé Ethiopian Cuisine in 2017 in St. Paul and carried over the insurance plan from the restaurant that had operated there before.

The couple expanded their inventory as the restaurant grew rapidly. They transformed the Subway next door into Bolé Express for casual dining and to-go service. But they never thought to upgrade their policy, which covered about $79,000 in losses.

“When you’re in the business, you don’t really stop,” said Haile. “Every day is just rolled over to the next.”

Bolé burned to the ground during the riots, and Haile lost $200,000. He doesn’t know if his landlord will rebuild.

The Ahns, too, were mired in the grueling work of running a family enterprise. Ahn recalled how the business was her family’s life, ever since her Korean immigrant parents opened a wig and beauty supply store on the North Side in 1989. In 1996, they opened their Lake Street store at the Hi-Lake Shopping Center.

The Ahns upgraded the shop in recent years, spending $30,000 on a room for customers to try on wigs, and were preparing to open a store on Nicollet Avenue in June.

They paid $3,600 a year to insure each of their stores. But they never updated the policy as their inventory increased.

“He didn’t increase the limits as the business grew,” said Ahn of her father, Daniel Ahn. “He never thought he would have a total loss.”

Many business owners bought as much insurance as they thought they needed.

In a normal robbery, a few people breaking in “cannot take the whole inventory out, no chance, so no one gets that much coverage,” said Sue Ryu, co-owner of Bling Bling Beauty Supply.

That’s why she bought only enough insurance to cover 40% of her inventory. Ryu sometimes wondered whether to increase coverage, but realized, “I had to pay way more when the chance of losing the whole inventory is very low.” She now faces $132,000 in uninsured losses.

Henry Jiménez said he has yet to hear of a positive experience with insurers from any of the businesses that he works with as executive director of the Latino Economic Development Center. And he noted that some owners did not keep adequate documentation of their inventory for insurers; the records they did keep were destroyed and not backed up electronically. Many had shops in Latino malls and either saw no need for insurance or could not afford it.

Thieves broke into the jewelry store Joyeria Max in La Plaza Mexico on Lake Street, emptied a safe, smashed glass cases and stole everything on display. Owner Maximo Figueroa filed an insurance claim with the Hartford for $87,000 in lost merchandise. He panicked, though, when he received a check for just $1,431 that an insurance representative told him was for his inventory. Figueroa e-mailed her that he had submitted a claim for substantially more, adding: “I request an interpreter for better communication.”

The firm e-mailed Figueroa this week that it would expedite the review of his claim, and the Hartford told the Star Tribune that once it learned he had not been paid for the full loss, it made sure he knew the firm would pay for everything covered by his policy.

Companies have rejected some claims outright. After immigrating here from Ecuador, Maria Livingood’s family opened a store on Lake Street called Agencia Elektra, where Latino customers could cash checks, send money to their home countries and buy groceries. They worked with an insurance agent to find a policy covering property loss.

Livingood estimated that a fire during the riots destroyed $75,000 and $100,000 in inventory and equipment. When the family tried to file a claim with their insurer, they were told the policy only covered liability to third parties. The insurer said it “cannot assist with the incident you are reporting.”

Agencia Elektra has almost given up trying to fight back “because every time we call, it’s something different, it’s a new excuse,” Livingood said.

Such denials should be rare. According to the Insurance Information Institute, virtually all business policies cover “riots, civil commotion and vandalism.”

State officials encouraged all business owners to file a complaint with the Commerce Department if they felt they were shortchanged or improperly denied coverage. So far, the department said, 118 of 1,337 riot-related claims have been closed without any compensation whatsoever.