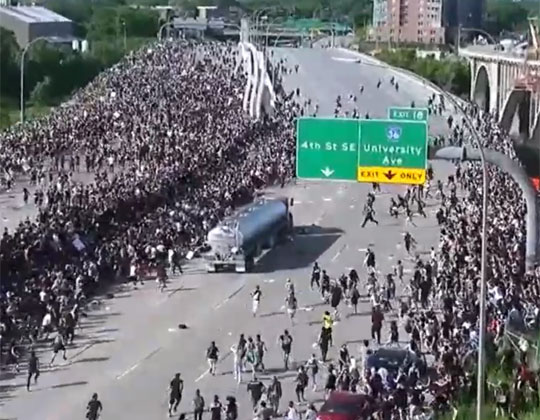 A Minnesota trucker who was arrested on suspicion of assault charges after driving his tanker into a crowd of protesters on Interstate 35 in Minneapolis has been released from custody while the investigation continues.

Bogdan Vechirko, 35, of Otsego, Minn., was jailed Sunday evening on suspicion of assault and held in the Hennepin County jail. He was released Tuesday, June 2, with charges pending the completion of the ongoing investigation.

“We don’t have any information that makes this seem like this was an intentional act,” Harrington is quoted as saying in a tweet. He goes on to say in a subsequent tweet that Vechirko likely “saw the crowd & he panicked.”

DPS Commissioner John Harrington said @mndot, @MnDPS_MSP & @MnDPS_BCA continue investigating how a semi driver got on I-35W on Sunday & drove into protesters. “We don’t have any information that makes this seem like this was an intentional act,” he said. #MACCMN

Vechirko was pulled from his tractor and attacked by a crowd of protesters before being arrested on assault charges by Minnesota State Police in a combined effort with the Minnesota Bureau of Criminal Apprehension.

(H3) But how did he get there in the first place?

Minnesota Department of Transportation camera footage shows events leading up to the truck entering the protest area in which no visible barrier was erected.

Lonnie McQuirter, owner of the 36Lyn Refuel Station in South Minneapolis, was possibly the last person to speak with Vechirko before the incident occurred. Vechirko delivered fuel to McQuirter’s store on a regular basis and has for more than four years.

McQuirter told Land Line Vechirko didn’t leave his station, which is approximately a mile from I-35, until 5:30 p.m. CST. He said that Verchirko did not know the curfew times had been changed from 8 p.m. to 5 p.m.

“I can’t speak for his route, because I wasn’t in the truck or on the interstate,” McQuirter said, “but I can tell you he had a difficult time navigating the roads that were already shut down because of the protest.”

According to McQuirter, Vechirko traveled the area on a daily basis, delivering fuel to multiple stations in south Minneapolis.

“I have seen him at other locations in this vicinity during my visits to other retail outlets as a member of the National Association of Convenience Stores conducting himself in an exemplary way with difficult customers,” he said. “I believe he was trying to get the tanker out of harm’s way and had no intentions of hurting anyone.”