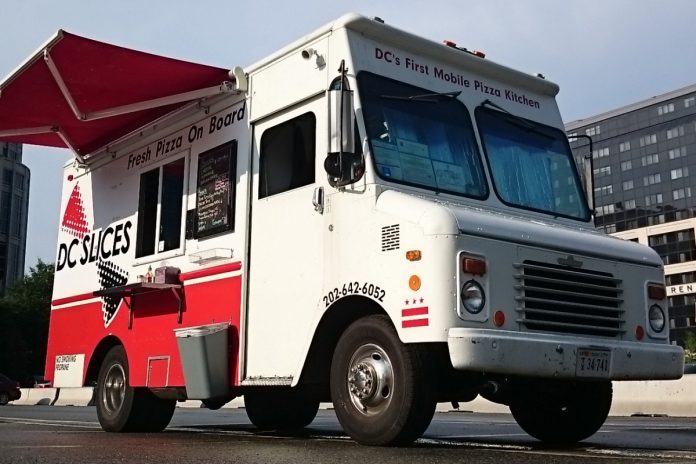 Perhaps you remember the movie Chef that came out a few years ago starring Jon Favreau. The one where he is married to Sofia Vergara, starts up a food truck with his young son in Miami, and is so immediately successful that Gordon Ramsay offers to fund the opening of his next restaurant?

If you haven’t, apologies for the lack of spoiler alerts. Regardless, it’s just the kind of Hollywood magic that can paint an unrealistic image of what it’s like to own and operate a food truck, a feat that an increasing number of chefs and entrepreneurs have been undertaking since mobile restaurants saw a boom during the 2008 recession.

Drawn in by the idea of mobility and the ability to track down the optimal lunch crowd, the number of food trucks in DC has exploded over the years. From arepas and ramen to artisanal ice cream to soul food, if you’re craving it, a food truck in DC probably has it.

For many nine-to-fiver, these trucks were once a staple of the workday, as people fled their desks in search of a few moments in the sunshine and a hot dog from Swizzler or maybe a comforting dish from CapMac. This was the pre-pandemic daily scene outside L’Enfant Plaza, where food trucks would rim the park and office workers relished in their meals on the grass. But, just as the pandemic has caused an upheaval for most industries, food-truck owners have certainly not been spared.

When you think about it, all of the perks of owning a food truck have been put on an indefinite pause, from the ability to come in close contact with your customers day-to-day to high-grossing gigs at music festivals and private events. Gone (for now) are the hordes of workers from L’Enfant Plaza, and the crowds of hungry museum-goers on the National Mall. So too gone are the food trucks.

In fact, the DMV Food Truck Association has been polling local drivers during the pandemic, and has found that a whopping 90 percent of them have left the city in search of new customers. Some other sobering statistics include 85 percent of vendors reporting a decrease in revenue since March, and while 74 percent of vendors have applied for federal assistance, only 33 percent have actually received it.

“In peak season, according to the Department of Health, there’s approximately 900 food trucks that come to DC. Now, 90% are not vending in DC. anymore,” says Zack Graybill, chairman of the DMV Food Truck Association and co-owner of DC Slices.

“Our bread and butter was our lunchtime crowds. Office workers, streaming out of their buildings, could easily get a meal from us. The majority of people are no longer working from their offices. The second factor is you have restaurants, takeout spots, all over the city already. It’s an urban area. Walkability is awesome, and there’s so many options. Competition is high.”

Not only is competition high — so are the costs of keeping a food truck running in the first place. In order to even obtain licensing, food-truck operators in D.C. have to go through a total of 28 procedures that require at least 23 specific interactions to regulatory agencies at a cost of nearly $3,000 — one of the only cities in the nation to require that amount of legwork. Those costs are added to the 16 local operating procedures, which require an additional 32 trips to government agencies and other entities, these fees totaling nearly $30,000. Other odd regulations for D.C. food-truck operators include an additional inspection and review process for meatless burritos, and a short size limit on trucks, at only 18.5 feet long.

On top of that, food trucks make a majority of their sales during the warmer months. Graybill said that some food-truck businesses realize as much as 75 percent of their total year’s sales between May and October. The Washington Post recently reported that one local vendor who paused his operations indefinitely is currently dealing with more than $100,000 in loans that he takes out annually in order for his business to survive every winter, when sales are at their lowest.

According to the Post, he didn’t consider taking out small-business loans with the PPP because they would only be forgiven if he spent 60 percent of the money on employment costs, despite the fact that most food-truck operator expenses actually go toward food and overhead.

Fortunately, food-truck owners have found some success in the residential areas of Virginia, where one can now find the majority of trucks providing curbside service. Graybill says that the communities in Virginia have largely been keeping food trucks alive right now, with residents reaching out to the DMV Food Truck Association through an HOA or through their apartment building to request that one serve a community for dinner.

You can contact the DMV Food Truck Association to find more information on how you can support local food trucks, and track your favorite food trucks on apps like Goodfynd and Food Truck Fiesta.

How to spec vehicles for a targeted duty cycle