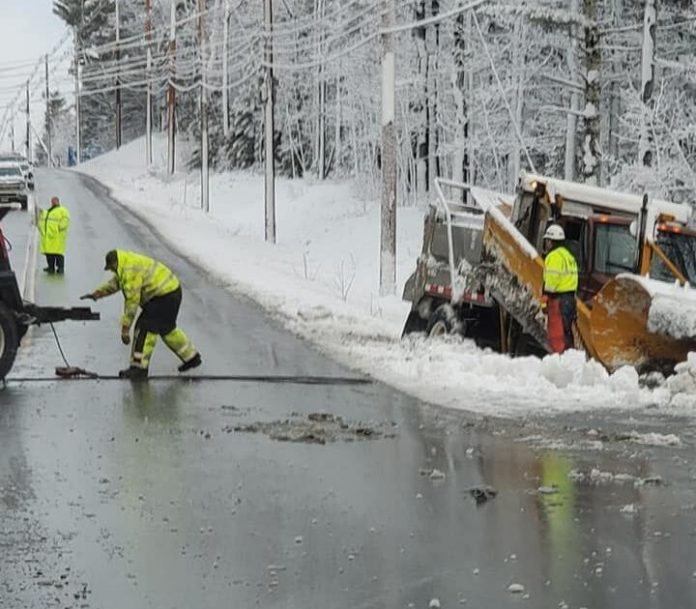 A Maine Department of Transportation plow truck driven by Christian Bamford, 21, of Blue Hill, reportedly lost control in the snowstorm on Route 3 near Sand Point Road Friday around 5 a.m. and went off the road into a ditch. The fender and sander of the truck were damaged, and it was towed later in the morning.

Police answered several questions this week about permissible business and lodging operations under the current state and local orders.

An officer removed tree branches that were in the roadway on Route 3 near The Bluffs the morning of April 6.

A Nissan Versa driven by Helen Day, 77, of Bar Harbor reportedly backed into a tree on Dorr Lane April 6. Day reported she had tried to turn around at the end of a dead-end road. The car had minor damage to the left side.

Loud bangs reported near Pine Street and Forest Street the morning of April 7 were coming from a construction company blasting in the area, police said.

Late-day sun and glare obscured a driver’s vision the evening of April 7, according to reports, leading to a Toyota Rav4 reportedly striking a utility pole on Mount Desert Street near Roberts Avenue. The driver was Andrew Samson, 19, of Bar Harbor. The collision broke the pole in two and the road was closed for several hours while utility crews repaired the damage.

An apparently intoxicated man was warned for reportedly hassling an Emera crew working on replacing a utility pole on Mount Desert Street the evening of April 7. The same man was also warned for disorderly conduct Saturday night on Cottage Street.

A dog was reported running loose at Hadley Point Beach the morning of April 8.

A resident reported April 8 that a stroller had appeared in her driveway and she didn’t know where it came from.

Police received a report of people yelling from a car at Compass Harbor Estates around 1 a.m. April 9. Officers were not able to locate the vehicle.

Trees in the roadway were reported during the storm last Thursday evening, and into Friday morning, on Route 102 in Town Hill, on Knox Road near Gilbert Farm Road on Norway Drive and on Route 3 near The Bluffs.

A fender-bender on Cottage Street was reported Friday afternoon. A GMC pickup driven by Paul Bowden, 65, of Bar Harbor, reportedly struck a parked Dodge Caravan owned by Mary Purvis, 50, of Bar Harbor. There was some damage to the minivan, police said.

A resident reported that his dog had broken free from its leash in the area of Oak Ridge Road on April 6.

A downed power line started a small ground fire near Butler Road the evening of April 9, Fire Chief Mike Bender said. Firefighters put it out and stood by until a crew from Emera arrived to repair the line. Another line down was reported on Beech Hill Road.

The wing of a snowplow on a town plow truck driven by Royce Gordon of Ellsworth reportedly struck and broke a utility pole on Manchester Road around 3:30 a.m. Friday. The accident knocked the wires so they hung low, police said, preventing Gordon from continuing to plow. The area was marked off with traffic cones and Emera repaired the pole.

A driver was warned for going the wrong way on a one-way section of Main Street in Northeast Harbor Sunday morning.

After causing problems at a Main Street store around noon on April 7, a man was issued a trespass notice not to return to the store upon a request from the store’s owner.

Two officers conducted a bail check on a man around 5:45 p.m. on April 7. After removing some items from his home, the officers explained conditions of release, but no summons was issued.

A man called police around 10 a.m. on April 8 to report he found his skiff had been partially untied and an item out of place while it was moored at the Lower Town Dock. According to the man, there was no permanent damage and he secured it better.

A woman called police around 5 p.m. on April 8 to report losing her hearing aids. According to police, a short time later she found them.

An audible alarm was reported at a residence in the area of Clark Point Road around 10 a.m. on April 10. When police contacted the property’s caretaker, they were told the alarm was most likely activated by a mouse.

Police received a report from a resident in the area of Cobb Lane who thought they saw someone run into the woods around 7:30 p.m. on Saturday. An officer went to the home and checked the area. No one was found or seen, and the homeowner was told to call again if there were any issues.

An elderly woman who called to report possible abuse on Sunday around 12:30 p.m. was transported to the hospital for a medical evaluation.

After having the car that he was practicing driving in catch on fire just after 1 p.m. on Sunday, one teen may be hesitant to get back behind the wheel. Police received a report of a vehicle fire Sunday afternoon at the corner of Seawall Road and Main Street. When an officer arrived, they found a 1992 Volvo with its engine on fire. The Southwest Harbor Fire Department also responded and extinguished the fire. While the teen, who has a driving permit, was driving with his dad, they noticed the car started to smoke. When they opened the hood, flames were shooting up from the engine. Once the fire was put out, the Volvo was towed from the area.

Two people were hiking on the Western Mountain Connector trail around 5:30 p.m. on Monday when they called police for help getting one of them down the hill safely.

When police called back a number from which a 911 call was made around 3:45 a.m., they talked to a man who had called 911 because of a nightmare. He was in his bed, safe and sound, according to the report.

Around 1:30 p.m. on March 15, a 62-year-old man called for an ambulance for a 57-year-old woman having a mental health crisis. A deputy responded to the home and assisted the ambulance crew.

On March 15, a deputy gave a 20-year-old Tremont man multiple warnings after the sheriff’s office received a motor vehicle complaint about him on Bass Harbor Woods Road.

A man called the sheriff’s office around 9:45 p.m. on April 4 with questions about the governor’s stay-at-home order.

Deputies responded to a report of a domestic dispute around 9:45 a.m. on April 10. Once they arrived at the home and investigated, the deputies found there had not been an assault, and the disagreement was verbal only. The people involved were separated for the day and given warnings for disorderly conduct. An officer from the Southwest Harbor Police Department was asked to assist with the call.

Darrell Freethey, 63, of Brooklin, was charged with operating after suspension after being stopped around 2:30 p.m. on April 8. He was summonsed and released from the stop, according to the report.

Theft from a business reported around 7 a.m. on April 9 is being investigated.

A woman called on April 9 around 2:45 p.m. to report a piece of mail sent to her home containing personal information looked like it had already been opened. She asked the sheriff’s department to document the incident, and also was going to file a report with the postmaster.

Union Pool’s patio (and taco truck) are back open

Oconto County Sheriff Office arrests 9 people, including one after crash