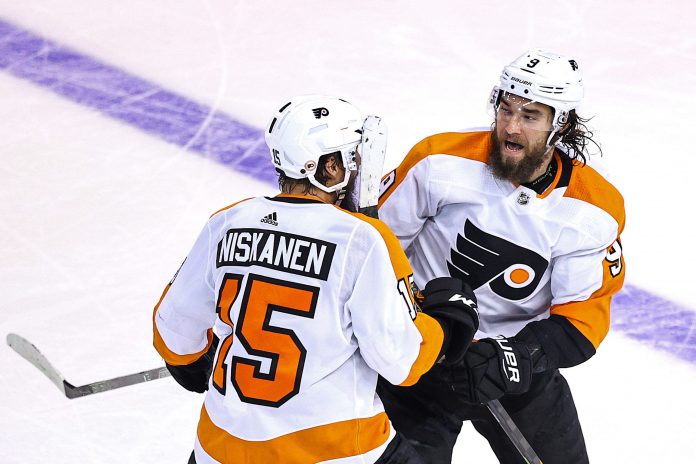 The Flyers and Islanders will go to battle in Game 7 of their series on Saturday.

Andy Greene wasn’t acquired by the New York Islanders in February so he could let doubt creep in with the season at stake.

The Islanders haven’t been able to put away the Philadelphia Flyers after taking a 3-1 series lead in the best-of-seven Eastern Conference second round, and now must push any negative thoughts aside in the hours leading to Game 7 on Saturday night at Scotiabank Arena.

“It’s short-term memory,” said Greene, the veteran defenceman who had been the captain of the New Jersey Devils before he was traded to the Islanders. “We can’t waste any energy or waste time thinking about what has happened at this point.”

While players will say it’s a clean slate when the puck drops for Game 7, the Flyers don’t have to concern themselves with thinking of what might have been. There is some buoyancy in the Philadelphia ranks after winning each of the past two games in extra time.

“I sort of feel like that we’re that toy growing up that you keep punching in the face and it keeps getting back up,” Flyers coach Alain Vigneault said on Friday. “We’ve been whacked and we were down 3-1 and we’re still there.

“There’s lot at stake, there’s a lot of pressure, but it should be an enjoyable moment for players and coaches. You lay out on the line what you have. This next one is going to be interesting.”

The Isles might have won Game 6 with some better goaltending from Semyon Varlamov, who allowed five goals on 31 shots. New York had 53 shots on the Flyers’ Carter Hart.

The option for Isles coach Barry Trotz would be to turn to Thomas Greiss, whose only two games in the 2020 playoffs were against the Flyers. Greiss won once and lost once.

“Both of them are really good options for me,” Trotz said, failing to acknowledge who will get the call on Saturday.

LIGHTNING ON THE MOVE

Idle since Monday when it eliminated the Boston Bruins, the Lightning will travel to Edmonton on Saturday ahead of Game 1 on Monday night.
“There is no hiding the fact we’re going to go a week between games, and to replicate the intensity we had in the two previous series, you’re not going to do that in practice,” Lightning coach Jon Cooper said on Friday. “The first game, those first few shifts, you have to make sure the guys are into it.
“It’s weird, because what’s today? Day 40 in the hotel? This has been our home. And now we have a date we’re actually leaving. We’re looking forward to moving on, because moving on somewhere else, it means that we have advanced.
“It will be a chance with the new surroundings to be a reset for us. I think that’s going to help with our mental makeup.”
Cooper said he will provide an update on captain Steven Stamkos (lower body), who has not played in the ’20 playoffs, closer to the series opener.

“Frustrating, no doubt,” Cooper said. “Everybody wants him to play and he wants to play.”

LINDBLOM A LIGHT
Not that the Flyers would require more inspiration to come all the way back and oust the Islanders, they could get some from forward Oskar Lindblom, who returned to the ice in Game 6 after a seven-month battle with Ewing’s sarcoma, a type of bone cancer.

“After going through what he went through, he could easily have said ‘Listen, with this situation and the way things are right now in the world and the COVID, I’m going to wait for next year. I’ll get ready and I’ll be 100%,’” Vigneault said. “No, he comes back, helps his teammates, gets himself ready to play. He is all in. It says a tremendous amount about the young man.”

Said Flyers teammate Robert Hagg: “It’s amazing to see him back on the ice. He has been pushing hard the last two months to get in shape. To see him on the ice was emotional, for sure.”

We couldn’t agree more with what Bruins star David Pastrnak said during a conference call on Friday from his home in Prague. “Crazy season, nobody expected this to happen,” Pastrnak said of playing during the pandemic and the restrictions that came with it. “I just want things to get back to normal.” … Trotz on the advantage of having the experience of 77-year-old general manager Lou Lamoriello as a guide: “Lou is always there for a resource. He is outstanding. This game is hard enough. You need some people who have gone through it a little bit.” … How has the Lightning grown since being upset in a sweep in the first round of the 2019 playoffs by the Columbus Blue Jackets? Cooper: “We understood, especially after last year’s playoff exit … I don’t think it was our talent level. The big thing was we didn’t have to beat a team 6-0 or 7-0, 1-0 or 2-0 would do. We always had that attitude: Let’s keep scoring, scoring, scoring. I’ve said many times, it’s what you keep out of the net, not what you put in the net. And that’s where we really had to have our growth.” … Prior to Friday, there had been 178 Game 7s in NHL playoff history. The team that took a 1-0 lead won 132 of those games.

Amazon is scrambling to find truck drivers to move your Prime...

Distribution will change in a post Covid-19 world – Truck News