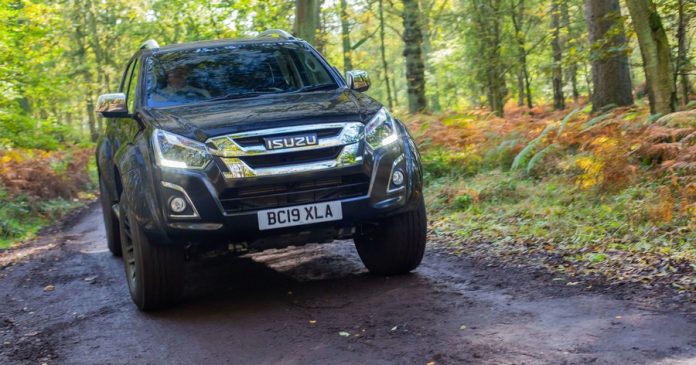 BEFORE Covid-19 struck, pick-up specialists Isuzu had given the go-anywhere Arctic Trucks AT35 version of the D-Max an update.

With its chunky tyres and flared arches, it’s still a wonderful piece of machinery, even if it doesn’t really make a lot of sense.

It’s no less wonderfully ludicrous, I suppose, than something like a McLaren or Lamborghini, though it’s obviously a lot more useful and practical.

These modified trucks are just as eye-catching as a supercar, too, which must be a big part of the appeal for anyone willing to spend more than £40,000 (before VAT) on a pick-up.

And just as a McLaren will lap a track faster than you can imagine and accelerate hard enough to rearrange your hairstyle, the D-Max AT35 has the hardware to go far further off-road than even your average 4×4 pick-up.

That’s largely thanks to the input of Arctic Trucks, an Icelandic outfit that is renowned for taking the world’s most capable 4x4s and preparing them to tackle otherwise impossible terrain.

It’s fair to say, then, that this D-Max has a range of capability far in excess of what almost anyone will ever need or be able to use… just like a supercar, then.

The refreshed D-Max AT35 arrived in January. Changes include a swap from the Fox ‘Performance Series’ suspension of the previous version to a new Bilstein set-up – all the better to “tackle even tougher terrains”, says Isuzu.

There’s a new ‘AT35’ logo plastered across the truck, black side steps, a bespoke leather trim, and a 9.0-inch infotainment touchscreen.

Just as a McLaren will lap a track faster than you can imagine and accelerate hard enough to rearrange your hairstyle, the D-Max AT35 has the hardware to go far further off-road than even your average 4×4 pick-up

All those outré styling pieces, such as the flared arches and chunky tyres, are carried over from before.

The AT35 might get upgraded suspension hardware but its D-Max business as usual under the bonnet, meaning a 1.9-litre diesel unit that deploys 162bhp and 266lb.ft of torque.

It’s not a rocket ship, then, but performance is perfectly acceptable for such a mighty looking machine.

In any case, the D-Max core role is to carry stuff, so the engine serves up its torque low-down in the rev range to help make lugging 3.5-tonne trailers and 1.1-tonne loads in the bed a breeze.

Isuzu is pitching this as a lifestyle vehicle rather than a commercial vehicle, though anyone coming from a modern SUV might find elements of the AT35 a bit of a shock, especially the ride quality; pick-up truck suspension tends to be designed to work best with a heavy load in the back, so in normal driving it skips and stutters across the road.

And like any big pick-up, the D-Max isn’t the easiest thing to drive in heavy traffic or manoeuvre in narrow streets.

For many buyers, it’s going to the styling that seals the deal. The D-Max pick-up truck is already a bit of a beast, but this turns that up beyond 11, with a massively increased ride height, fat 35-inch Nokian Rotilva tyres and flared arches. No wonder it turns heads.

The interior has been improved significantly over the regular D-Max – the centre console design, with its chunky rotary dial for the climate controls, is true to the truck’s working origins, but the standard-fit leather upholstery manages to give some premium appeal.

The AT35 uses a double-cab body, so it is decently spacious inside. The new infotainment system works great, too. Despite not having the most up-to-date graphics, it has everything you need, including satellite navigation and smartphone connectivity.

For your £39,995 (excluding VAT), you get a decent amount of standard equipment on the AT35 – those 35-inch tyres with 17-inch alloy wheels, flared wheel arches, roof bars and a rear load liner.

There are optional extras too, such as LED light bars, a choice of top roll covers and an Arctic Trucks tow bar attachment.

Buying something like an Isuzu D-Max Arctic Trucks AT35 is definitely a heart-over-head purchase – just like those supercars mentioned at the start.

Yes, it’s capable, but there can only be a handful of places you could really take advantage of its extra capability over the already talented D-Max.

But it is also the sort of vehicle that is guaranteed to bring a smile to your face. And don’t we all need a bit of fun these days?

GRAPHIC-May flowers: Where the U.S. retail blooms are and are not