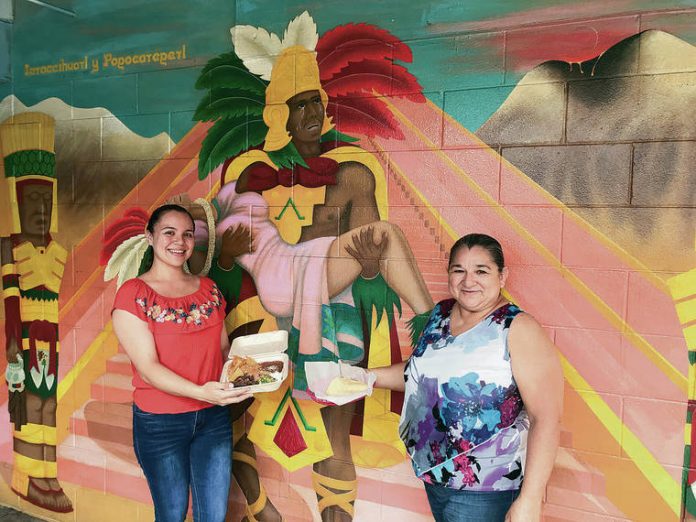 Tuesday is Cinco de Mayo. Sadly, Maui’s Mexican restaurants will not be jumping like frijoles in a hot skillet as in years past. Yet aficionados of south-of-the-border cuisine can order the whole enchilada of takeout food from restaurants still open during the pandemic.

Fiesta Time at 1132 N. Lower Main St. in Wailuku is open and dishing up the real Mexican deal. From Sinaloa, Mexico, owner-chef Edith Luna is a veteran in Maui’s restaurant industry and cooked at the old Papa’s & Chiles and at a different Fiesta Time before taking over this location.

Vibrant Mexican murals adorn the outside of the building. Inside, there is a walk-up counter. Hours are 10 a.m. to 7 p.m. weekdays and until 2 p.m. Saturdays. Signatures are enchiladas Mazatlan with shrimp, olives, mushrooms, onions and tomatoes; and chile verde pork in green sauce.

“As Cinco de Mayo specials, we will make queso dip with chips for $5 — a lot of people ask for that — and we’ll do menudo (a traditional tripe soup). These are rare specials. People ask for them all year,” said Edith’s daughter, Johana Luna, who runs the front of the house. “It’s a bummer that things aren’t normal now. We’re just doing the best that we can.”

Las Pinatas of Maui is celebrating its 25th anni­versary off Dairy Road in Kahului (near Tin Roof by Sheldon Simeon). Approach the walk-up counter and delight in the pinata display hanging from the ceiling, from teal-blue fish to shaka hands in reggae colors.

“We sell pinatas made by ARC of Maui, a nonprofit for our developmentally disabled adults,” said owner John Hargrove. “Some are imported from Mexico. You can buy them and take them home to fill with what you want.”

As far as Cinco de Mayo goes, it just may be smokin’ hot like a chipotle, so place your orders in advance at 877-8707. Happy-hour specials are all day from 10 a.m. to 7 p.m., with $1 off quesadillas and nachos and discounts on entree specials. Hands down, the kitchen-sink burrito is the most popular item.

Roasted Chiles at Azeka Mauka in Kihei was closed for two weeks. “But when we came in to clean up, we got so many phone messages begging us to open, we did,” said owner Ofir Benitez, who hails from a Mexico City restaurant family. Takeout hours are 11 a.m. to 7 p.m. Monday to Saturday. “It’s been good; things have been picking up.”

For Cinco de Mayo, Benitez will make fresh $5 tamales as the all-day special, until they run out.

“We’ll also have the langoustine (Norway lobster) enchiladas, the chicken mole, the very traditional posole (a rich soup with hominy and protein) and various fajitas, except fish. Fish is hard to get right now. There’s also a shortage on-island for produce.”

Interesting. Benitez is far from the first restaurant owner to tell me there’s a produce shortage, and farmers are saying they can’t sell what they grow. Can it be that too many distributors have been furloughed?

Yet Coconuts Fish Cafe must have connections. It is wowing Kahului customers with ono and mahimahi tacos ($14) from its food truck parked in front of the Shell station across from Maui Beach Hotel from 11 a.m. to 7 p.m. Mondays to Saturdays. Get two fish tacos on white corn tortillas with mango salsa, tomatoes, lettuce and cheese and a coconut milk-based cabbage slaw. Call 298-2356. Coconuts Fish Cafe in Kihei is also doing brisk takeout business. Call 875-9979.

Many other Mexican restaurant favorites remain temporarily closed, such as Frida’s Mexican Beach House in Lahaina.

“When we do reopen, we’re rewriting our menus, and everything on it will be under $30. We’ll still have the same name but with totally different food and price points,” said Frida’s owner Mark Ellman, who had just gotten off an informative webchat with Spanish chef and philanthropist Jose Andres (founder of the World Central Kitchen charity) and other heavy hitters in the industry.

Now that’s a whole other story.

Those who want to top Tuesday with Cinco de Drinko purchases will find an ample selection of everything from Tecate and Dos Equis Mexican beers to Patron tequila at grocery stores. Cerveceria Modelo in Mexico may have temporarily halted production of Corona, but there is still plenty of stock. Store managers say Corona sales are up during the crisis. Safeway Maui Lani boasts a colorful archway display with Corona beer deals. Go figure.

In-depth Analysis of How COVID-19 is Impacting the Automatic Truck Landing...