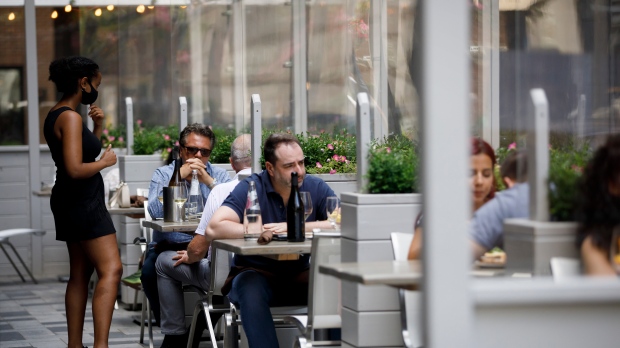 TORONTO — In the heat of the summer, Charles Khabouth is already thinking about the chill ahead.

The entertainment kingpin behind dozens of clubs, restaurants, entertainment venues and music festivals got many of his businesses back in operation in the spring following the onset of COVID-19, but he believes convincing people to continue to venture out in colder months will be tough.

“If the next few months of COVID does not go away or they don’t find a solution or medication or something, it’s going to cripple the city for sure,” said Khabouth, who runs Toronto-based Ink Entertainment.

“It’s going to get worse because come October, November, December, it gets cold, there’s no traffic, people are not on patios and people are not walking around.”

Khabouth’s concerns are being mirrored by dozens of businesses across the country, nervously eyeing their calendars and hoping that consumers will continue to visit long after outdoor spaces have closed and temperatures have dropped.

For these owners, the stakes are high. Many of their businesses were shut down for weeks or months when COVID-19 began and they watched sales tank. Others are on the brink of bankruptcy or closure.

Depending on how recovery from the pandemic goes, the Canadian Federation of Independent Business fears as many as 218,000 or 19 per cent of small businesses in the country could close.

The organization says surveys it conducted have shown only 26 per cent of small businesses are making normal sales and six in 10 are concerned that consumer spending will remain low even after the pandemic is over.

“No one’s buying much. Friends of mine own clothing stores and the only things that are selling are casual clothing like jeans, running shoes and T-shirts and no one’s buying jackets, dress shirts, dress shoes,” said Khabouth.

Khabouth got through the summer months with physical distancing at his restaurants, a drive-in space that hosted concerts and movies, and by turning his Cabana Pool Bar into a massive outdoor restaurant, but even he had his hardships and isn’t sure what the fall will bring.

He had to close Cube, his 15-year-old Toronto nightclub, because he couldn’t work out an amicable rental deal with the landlord. At his other spaces, physical distancing and enhanced cleaning measures mean fewer guests can be packed into the spaces — and fewer guests means less cash spent.

“I like to joke that we went through five business models in half as many months,” said worker-owner Aleksandra Szaflarska.

When COVID-19 hit, the brewery had to close its small tasting room and transition to bottling and delivering its craft beer.

It worked with the local government during the summer to get a physically distant patio opened and arranged for a food truck to regularly set up at the site.

“Of course now with the cold coming, we’re thinking that we’re going to have to pivot to another business model again,” Szaflarska said.

“We don’t expect that people will want to sit outside on a cold patio, although we’ve had some customers suggest we embrace the Canadian winter and just put out blankets … but we don’t really see that as working too well in the long term, so we anticipate that in-person, glass beer sales will fall again.”

The sister-owners behind Maguire Boutique are fretting about the cold as well.

While they don’t operate an outdoor space, Myriam Maguire fears Canadians will be venturing out less to shop at their high-end fashion boutiques in Montreal and Toronto as fall and winter roll around.

She noticed that as soon as restaurants started reopening, foot traffic returned to her locations, but it was nowhere near what it used to be.

“Montreal restaurants opened faster than the Toronto restaurants and as soon as they did, there were women coming in to buy heels and sandals,” she said.

She worries the boost will dissipate when patios close and consumers return to making the bulk of their purchases online.

“I am really worried that some of my neighbours offering great brunch that would bring people on the weekend are going to have to close and not survive the winter,” she said.

“We will have no foot traffic in the store.”

This report by The Canadian Press was first published Sept. 1, 2020.

CBP finds 28 undocumented immigrants lying on top of each other...

After years of searching, this N.L. man finally found a cherished...