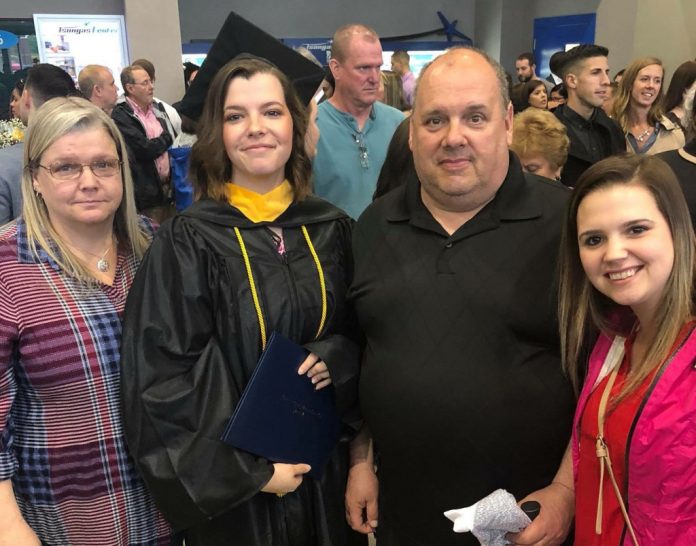 LOWELL — Ronald Archambault, 61, of Lowell, believed in the value of hard work, worked nearly every day of his life, and loved to tell people about his kids and his plans to send them to college.

He succeeded in that goal.

Two of his three daughters, Rhiannon and Rebecca Archambault, both of whom are college graduates, recently heard from one of their father’s doctors about his propensity for talking about them and his work to ensure their future.

“My dad worked every day and sent us both to college and both me and my sister graduated thanks to him,” Rhiannon Archambault said. “I am eternally grateful for how caring and how hard a worker he was.”

The sisters lost their father to COVID-19 on June 11.

The family is still at a loss as to how he contracted it. His wife, Shirley Archambault, survived an aggressive form of lung cancer 11 years ago, and as a result is especially vulnerable to the virus. So the family took every precaution they could.

Shirley barely left the family’s home for months. Ronald, a tow truck driver and essential worker, continued to work, but no longer allowed anyone to ride in his tow truck with him, wore a mask, and kept his distance from everyone while on the job. He also ended up working less than usual since the need for tows went down as many people quarantined.

Rhiannon, out of work due to the pandemic, isolated with her parents. Rebecca and her 18-month-old son isolated away from her family as a precaution, as did a third daughter Deana Metallic, of Winchendon.

It wasn’t easy for any of them. Rebecca has had only socially distanced contact with her parents for months. Ronald and Shirley couldn’t hold their grandson. Ronald had long looked forward to almost nothing more than his Monday night dinners out with his wife, and Tuesday night movie dates, according to his daughters. He gave up the joys of his two nights off each week in an effort to keep his wife safe.

But despite months of isolating and taking precautions, Ronald Archambault started feeling sick on May 16, got tested for COVID-19 on May 19, and was hospitalized on May 20.

It was just the beginning of the family’s horrifying battle with the virus that has claimed more than 100,000 lives nationwide, and over 450,000 across the globe.

On May 22, more bad news followed. Shirley got sick and tested positive as well. For five days she was able to battle the virus at home with Rhiannon caring for her.

On May 26, the day that Ronald and Shirley should have spent celebrating their 30th wedding anniversary, doctors determined Ronald could no longer breathe on his own and placed him on a ventilator.

Ronald and Shirley Achambault were never able to speak to each other in their 30th year of marriage.

They last spoke a few days before Ronald went on a ventilator, Rhiannon said.

At first, her dad would call her mom from the hospital every day, several times. But then after a few days, he was so tired he couldn’t call. His nurse started calling Shirley to give her updates when Ronald couldn’t.

On May 27, Shirley was hospitalized as well.

Rhiannon started feeling sick that day too, and was diagnosed with COVID-19 on May 29. She was one of the lucky ones, though, and overcame the worst of her symptoms — loss of smell and taste that left her with no appetite — in just a matter of days.

Rebecca, 29, having never previously discussed this kind of thing with her parents, suddenly had to make life and death medical decisions for her parents while consulting with her 25-year-old sister.

She studied the virus as much as she could to help make informed decisions.

“I learned a lot about the damage it does to the entire body, not just the lungs,” Rebecca said.

She said the battle has been a rollercoaster, with good news often followed by two or three steps back.

“One day we got some good news about mom, and then six hours later we got a call because she had a heart attack,” Rebecca said.

Rhiannon and Rebecca said that as the days of early June progressed, the good news about their dad got more and more rare, while the steps back didn’t slow.

Shirley Archambault was unconscious on a ventilator when her husband’s heart stopped beating on June 11 at 1:41 p.m.

Though Rhiannon and Rebecca couldn’t visit their parents when they were in the hospital, they were granted a special exception and held their father’s hands as he died.

“That was the only time that we were able to be there,” Rhiannon said. “It’s not an experience I would wish on anyone in this world.”

Shirley remains on a ventilator in the intensive care unit at Lowell General Hospital.

She still doesn’t know that her husband of 30 years is gone.

Her daughters face the prospect of that conversation when their mother awakes.

Shirley’s daughters speak to her often via Zoom thanks to help from Lowell General nurses. Both sisters said the nurses and doctors and staff in the intensive care unit have been incredibly caring and helpful, treating their parents like their own family.

And while Shirley can’t acknowledge her daughters or talk back during the Zoom calls, both sisters said they’re confident their mother can hear them on some level. They said the calls help give them a sense that they are still there with their mom.

Currently Shirley’s doctors are working to slowly get her off of a ventilator, her daughters said.

“But she definitely still has a long way to go and will probably need rehab when she does get out,” Rebecca said. “She’s fighting. Both my parents are stubborn as hell and they’re fighters and we’ve seen that through all of this.”

Rhiannon and Rebecca said that despite their ongoing battle, they want to share their story so others can understand the threat the pandemic poses.

“My parents are incredible people, and my father didn’t deserve to go out that way,” Rebecca said. “I refuse to let him be just another number. If I can use our story to raise awareness and influence others to make smarter decisions, that’s what I want to do.”

“Our parents taught us to be kind, caring, and outspoken individuals,” Rhiannon said.

The sisters’ strength as they face this continuing battle with the virus, they say, comes from the parents who have been so stricken by it.

“They taught me how to be strong,” Rebecca said. “With everything that my mom went through with cancer. She was a fighter through that. She was told she had a 20 to 30% chance of making it with that cancer, and she made it through that. I think I get a lot of my strength from both of them.”

“Their strength is why we keep going everyday during this incredibly difficult time,” Rhiannon said.

They said the ordeal has also brought them closer together, as they lean on each other for strength and advice about the issues they must now face.

Rebecca said she hopes the family’s story will possibly help others avoid the virus, or at least try to.

“I never thought we would be in the position we’re in right now — making life and death decisions for both of our parents at the same time — and it’s not something I would ever wish on anyone,” Rebecca said. “I wish people would be smart about the decisions they make.”