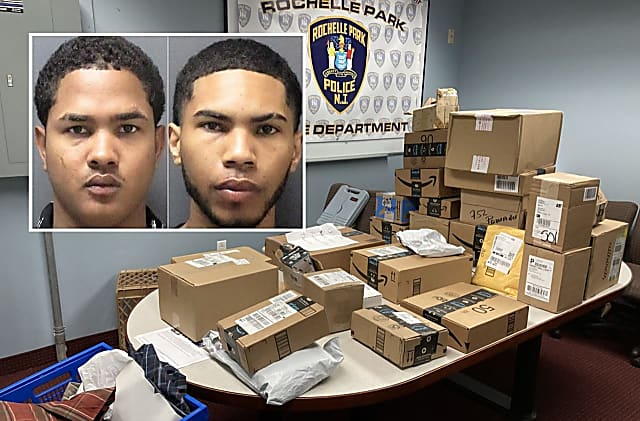 Rochelle Park Dispatcher Mike Columbini, who is also a Special Police Officer 2 in Hackensack, alerted Detective Sgt. James DePreta to the vehicle, which parked on a Hackensack street.

He noticed its distinct window vent guards, tinted windows and a sticker on the front A-pillar that matched the description of a white pickup seen in several home surveillance videos recorded during the thefts, DePreta said.

Detective Chris Bermudez and DePreta followed the vehicle on Rochelle Avenue and down several side streets on Friday, watching it stop and start “without an apparent destination,” the sergeant said.

They stopped the pickup, saw the packages – which bore various addresses – and took the driver and two passengers into custody, DePreta said.

Kelvin Hernandez Brioso and Francisco Castillo Rodriguez, both 22, of Hackensack, were charged with theft, receiving stolen property, possession property derived from criminal activity and employing a juvenile in the commission of a crime.

A 15-year-old boy was released to a guardian and Broiso and Rodriguez were turned over to Maywood police.

Next stop: The Bergen County Jail, to await detention hearings.

“Detectives will be working to return all the stolen property to the rightful owners,” DePreta said.

He also gave a shout out to Columbini, an “extremely alert dispatcher/special police officer who should be recognized for this identification.”

Police in several Bergen County towns were looking for the white pickup truck that victims in at least six towns say was involved in pirating packages from their porches.

The Ford F-150 was spotted at the scene of similar thefts in Hackensack, Hasbrouck Heights, Lyndhurst, Maywood and Rochelle Park, as well as in Nutley, among other towns.

It’s parked right out front in this video:

The white Ford F-150 is parked right out front in this video.

A thief snatches a children’s chair from a Hasbrouck Heights porch.

Make-A-Wish annual truck convoy to be held virtually on Aug. 16