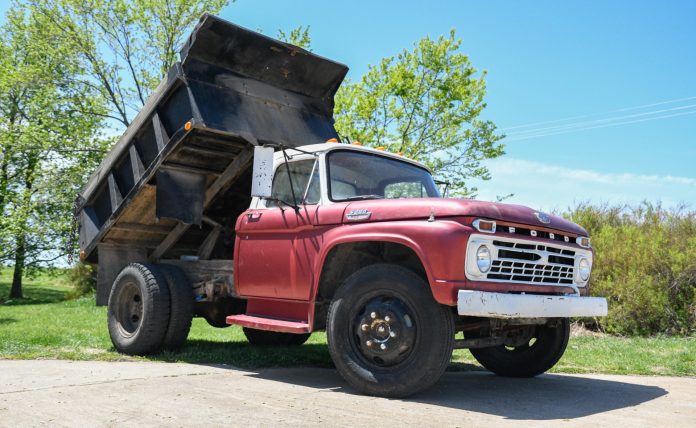 Every now and then you need to be reminded that an old car, no matter how tough—and I think a 1960s Ford dump truck counts as pretty tough—still comes with old car problems.

If you didn’t catch the introduction to my 1966 Ford F600 dump truck, then here’s the long and short of it: I bought the two-tone beauty, which is more than twice my age, for $3,000 and immediately put it to work hauling gravel. Shortly after discussing the buy with my more urban colleagues, I wrote an article and became The Drive’s resident Dump Truck Man. I had already claimed my place on Cloud Nine as the happiest car-driving man in Southwest Missouri, but now it’s broken and my feet are back on the ground. It’s kind of sad, to tell the truth.

The truck was loaded with an admittedly heavy heap of creek rock when there was a loud POP! Not what you wanna hear when you’ve got five tons of earth just behind your head. Upon returning the dump bed back to its original position, it started to shimmy from side to side as it came to a rest.

That was the second clue that, hey, somethin’ isn’t right.

Gathered with the day’s motley crew of campground workers, we inspected the bed’s steel frame to find a straight-through crack, running the entire four-inch height of said metal piece. As you can imagine, we called it a day and started planning the repair.

Police Log: Woman Breaks Into Jewelry Store With No Jewelry –...