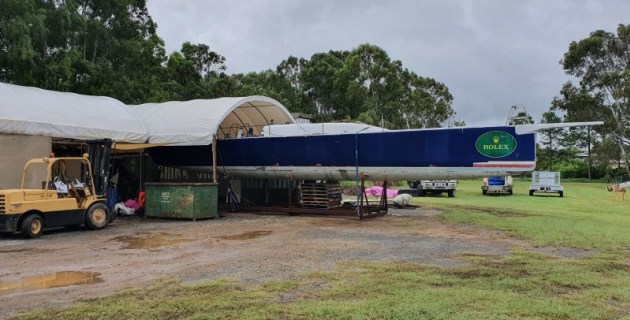 In parts 1 – 3 we have explored the purchase, haul out and delivery from Sydney to Brisbane of the World’s First TP52, a vessel we rescued from becoming scrap. When we last left the boat, it had just arrived at our yard in Brisbane.

Walking around the yard like a zombie due to a long drive and severe lack of sleep isn’t ideal when you have such an important job to do as to lifting a 52ft yacht onto a cradle, but that is exactly what I was faced with. You would think the excitement of her being at our yard would allow me to get through, however the day would be a long struggle for me, lucky I had good people around me.

The yacht turned up first and with a lot of skill and experience, Stuart from Boats by Road eased her into the back yard. When I say ‘Our’ yard, it is the home of Ocean Crusaders but the back yard of a friend who just happens to own JSA Marine, a boat service/repair company based at Royal Queensland Yacht Squadron. His son Dylan lives there and they have boats all over the back yard that are in various states of repair. This would be the biggest by far.

We are set up entirely off the grid with a couple of 40ft containers and domes which we store our boats and vehicles under. To prepare for the arrival of J-Bird we had purchased a second-hand shipping cradle from a guy who had closed his boat transport business. We have a forklift in the yard as well so we moved it into a position so that the crane could lift the boat onto it and eventually we would put a set of wheels on the cradle to roll it back into the existing dome.

Wayne Burgess from Bayside Crane Hire is a master at his trade. When someone turns up in a mint condition crane that looks like he has polished it when he gets home after every job, you know there is a good operator behind the wheel. He was recommended by Jason at JSA Marine.

The boat was unsecured and sitting waiting and with my friend Pete Rogers who is a rigger/dogger and Wayne’s rigger, the mast was soon in the air and placed out of the way. We would later reposition it on to the roof of the containers using our crane truck. For now, it was all about the boat itself.

Between Stuart and Wayne, they had the lifting position pretty much spot on and soon J-Bird was flying once again, a short flight, but a smooth and beautiful one. Sitting over the cradle, we adjusted the stands to fit the hull and Wayne gently lowered her into position. Everything happened so smoothly and that comes down to great operators. I really couldn’t have been happier with the whole process from The Quays Marina preparing her for the road, to Boats By Road for her smooth journey, to Wayne lifting her and placing her so gently onto her new cradle, where she will be until she is looking totally different.

The final part was to lift the keel off the back of the truck. Of course, this went without hitch and soon enough I was at the yard alone with our new girl.

In the coming days I would purchase hubs to install onto the cradle and we had enough wheels on trailers we own to roll her back into the dome. We then removed the wheels and settled her down onto blocks. We also stood the keel up behind the containers, something that would stretch the capabilities of our forklift substantially. The tyres were under extreme pressure but luckily, we have a 4 tonne forklift.

In order to completely enclose the boat, we purchased another 20ft container which would also store all of the gear from the boat. It was delivered and as it was a standard height container and our other container was high cube, we had to put it high on blocks. We then purchased another 40ft dome as the containers were separated, so as to get the doors opening towards each other. The domes would overlap but that was fine for this program.

Slowly but steadily J-Bird was fully covered and when the end wall went on, she was out of the elements and the big dry up started. What I mean by that is that this boat had been sucking in water into the bilges and the deck for many years with no maintenance. She was definitely heavier than she should’ve been. Originally the boat was meant to be 7,495kg out of the factory. That’s about half a tonne heavier than a new TP52 showing that it was built for the original purpose of the class, the Trans-Pacific Yacht Race.

When we lifted it, the keel was just short of 4 tonne. The mast was 300kg which is amazing for a 25m rig, and the hull, with a lot of gear in it still, was just over 4 tonne too, hence the total of 8,300kg all up. Yes, we had to remove a lot of additional gear from the boat, however the biggest thing we were to remove was the rotten core and a seized diesel engine.

Our next mission was to empty the boat out and strip her down, a task that will take quite some time. So, we will save that for several articles in the future.

Ocean Crusaders is a charity dedicated to cleaning our oceans. We go places others don’t want to, remove rubbish others don’t even know is there and we do it for one reason, for our marine life. J-Bird III was destined to be scrapped if we hadn’t bought her and now she is being recycled and given a new life. Our motto for this boat will be ‘Zero Emissions, Zero Compromise’ as we turn her electric. That doesn’t mean we have to compromise on anything in the way of performance!!!

To follow the efforts of our charity visit www.OceanCrusaders.org

Clean Oceans Make Us ALL winners!!!

One Dead, Two Injured In Route 80 Construction Truck Crash In...