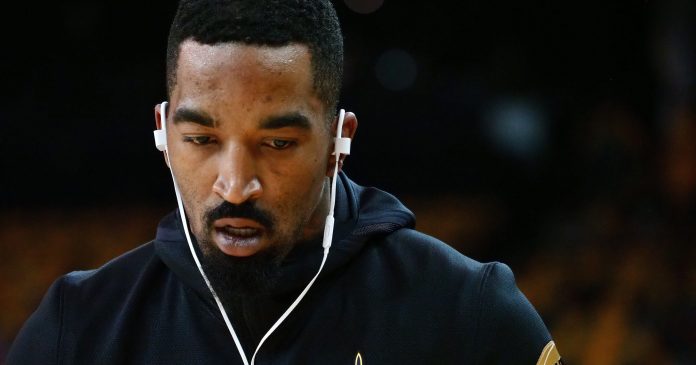 Smith, 34, won an NBA championship alongside LeBron James with Cleveland in 2016, but wasn’t on an NBA roster this season.

Former NBA star and Lakewood native J.R. Smith says he beat up a man who allegedly damaged his truck during the protests in Los Angeles over the death of George Floyd.

“I chased him down and whupped his ass,” Smith said in a video published by TMZ Sports on Sunday.

“He didn’t know whose window he broke and he got his ass whupped,” he said.

TMZ published a second video where Smith is seen kicking a man when he is on the ground and then punching him when he gets up. Then the man runs away.

According to TMZ Sports, the fight took place near a sneaker store, which had been looted during the protest. Smith did not face any criminal charges as of Sunday.

Smith in 2009 served 24 days of a jail sentence stemming from a 2007 car accident in Millstone Township that killed his friend, Andre Bell, who was Smith’s passenger.

Smith, 34, won an NBA championship alongside LeBron James with Cleveland in 2016, but wasn’t on an NBA roster this season.

At Lakewood High School, Smith led the Piners to the school’s first NJSIAA section title in 25 years in 2002 before transferring to St. Benedict’s for his senior season. He began his pro career after being selected by New Orleans in the 2004 NBA Draft.

SportsPulse: USA TODAY Sports’ Sam Amick and Jeff Zillgitt break down a wild Game 1 of the NBA Finals and how the Cavaliers will respond after J.R. Smith’s devastating gaffe.

3 teens rescued from waters off Mercer Island after boats overturn