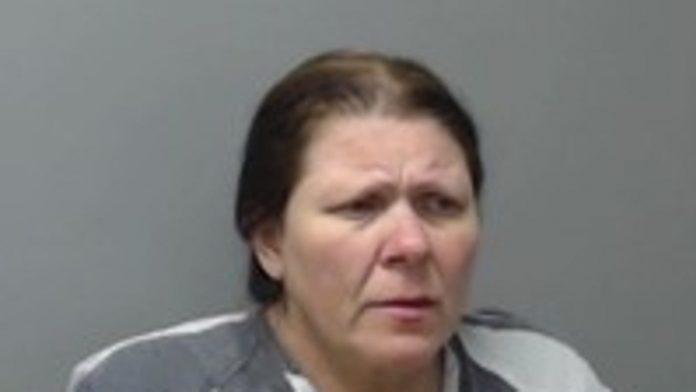 The Baxter County Jail offers a commissary, a small sort of store where inmates can buy hygiene products and snacks. It offers inmates some little comforts as they serve time or await trial.

Cpt. Jeff Lewis of the Baxter County Sheriff’s Office confirmed that two things not available for purchase from the jail’s commissary are methamphetamine and marijuana. That’s why 46-year-old Mountain Home resident Vanessa Berquist was charged with tampering with physical evidence, among other crimes.

The May 5 incident began with Berquist as a passenger in a Ford F250 truck with an expired tag. Trooper Lance Coffman of the Arkansas State Police pulled the truck over at a Mountain Home fast food restaurant.

As Coffman was pulling the truck over, he noticed Berquist putting on her seatbelt. Coffman said in an affidavit both Berquist and the driver were nervous and moving “frantically” inside the truck.

The trooper had the male driver step out and spoke with the man. Then, he did the same with Berquist. As Berquist exited the truck, the trooper noticed a purse on the floorboard of the front passenger seat.

The trooper asked Berquist if there was anything illegal contained in the purse. Berquist’s reported response of “not that I’m aware of,” likely did not inspire confidence regarding the contents of the purse.

In fact, the trooper asked for permission to search the purse. Berquist reportedly granted permission. Coffman searched the purse and reported finding a bag of marijuana including some partially burnt marijuana cigarettes.

The trooper wrote the man a ticket for the expired tag and he was allowed to go on his way. The trooper arrested Berquist and drove her to the Baxter County Jail. Upon arriving at the jail, the trooper issued Berquist a warning.

He told Berquist that if she had anything illegal on her person and lied about it, she would be charged with the Class B felony of furnishing prohibited articles. The charge carries a maximum prison sentence of more than three times that of a simple felony drug charge.

Coffman brought the woman into the jail and informed jailers Berquist had drugs on her person. Jailers placed Berquist on a bench to await a female jailer to conduct a search of the woman.

As she waited, Berquist reportedly “retrieved the items from her bra and began attempting to eat the evidence,” according to the affidavit. A jailer who had been watching Berquist intervened and was able to prevent Berquist from eating the drugs.

While she did avoid the Class B felony charge after she admitted to having the drugs on her person, Berquist’s attempt to eat them triggered the consequence of a Class D felony charge of tampering with physical evidence to be filed against her.

Grandmother saved her grandson’s life when she was ran over and...