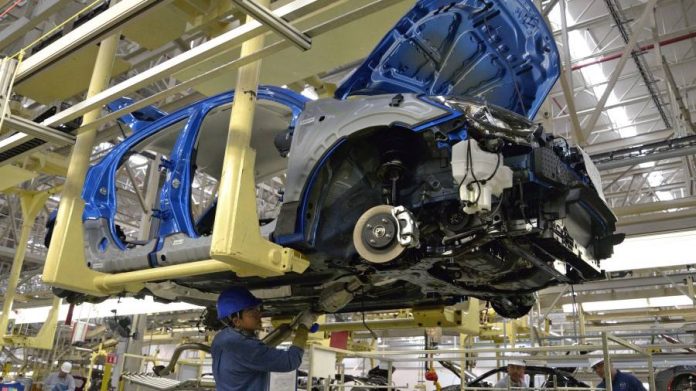 The new North American free trade agreement that came into effect on July 1 was touted by US president Donald Trump as an engine of American job creation. But Japan’s automakers are largely opting instead to keep their Mexican operations in place and pay their workers more or even just pay tariffs.

The US-Mexico-Canada agreement requires 40 per cent or more of parts for each passenger vehicle to be manufactured by workers who are paid at least $16 an hour as a condition to make them tariff-free in the region. Mr Trump hailed that feature as a way to boost production in the US, which has a higher hourly rate than Mexico.

However, this looks to be wishful thinking. The ratio of US-Canada parts among Mexican-assembled vehicles sold in the US was 13.5 per cent in 2018, according to the US Department of Transportation’s National Highway Traffic Safety Administration. Mr Trump’s theory was that US production would inevitably increase to meet the 40 per cent requirement, but Japanese automakers — which had already positioned their production bases according to the old Nafta regime — are not willing to up sticks and redeploy.

One reason is the cost of moving production. Honda-affiliated parts maker Keihin will raise the hourly wage of employees at a factory in Mexico to $16 by next month — triple the average rate of a parts factory in Mexico but still cheaper than making a move. Because the pandemic has hurt earnings, the cost of moving production will probably be too burdensome over the foreseeable future.

Auto component maker Piolax will raise the hourly wage at its Mexican plant to $16 within the year, and is also installing robots to mitigate rising labour costs, said Yukihiko Shimazu, company president.

This article is from the Nikkei Asian Review, a global publication with a uniquely Asian perspective on politics, the economy, business and international affairs. Our own correspondents and outside commentators from around the world share their views on Asia, while our Asia300 section provides in-depth coverage of 300 of the biggest and fastest-growing listed companies from 11 economies outside Japan.

Toyota, which built a new plant in Mexico in 2015, is not finding it easy to change plans either. The new plant started full-scale production of pick-up trucks in February. The trucks are popular in the US and will be subject to a 25 per cent tariff if they do not meet the content requirements of the USMCA. But if Toyota does not operate the factory, it cannot recover its investment.

“We don’t want to be whipped around by a policy that we don’t know how long it will last,” said an executive at a Japanese carmaker.

Toyota has told the US government it will invest $13bn in the country over a five-year period beginning in 2017, but most of this commitment was made before Mr Trump became president.

Consumers will ultimately pay the price for inefficient production and increased component flow. The Center for Automotive Research estimates that 13 per cent to 24 per cent of all cars sold in the US will be subject to tariffs. If automakers pass these costs on, vehicle prices will rise by between $470 and $2,200, it said.

The CAR also said US car sales would drop by up to 1.3m units a year due to the Trump administration’s trade policy, including sanctions on China. It estimates that 70,000 to 360,000 jobs will be lost, leading to a $6bn to $30.4bn reduction in gross domestic product.

The pandemic is also dragging down demand, setting up a tough road ahead for the auto industry.

A version of this article was first published by the Nikkei Asian Review on June 28 2020. @2020 Nikkei Inc. All rights reserved

Some businesses unable to survive the pandemic shutdown