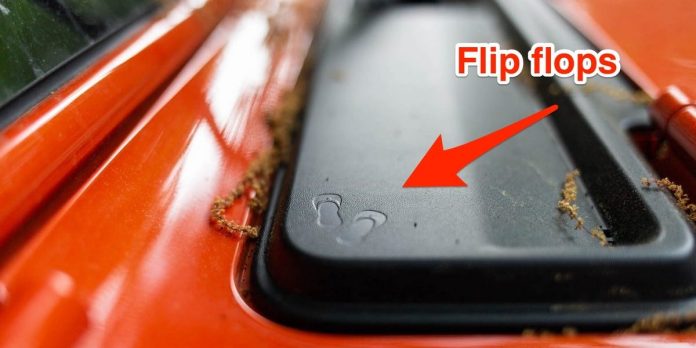 It’s not hard to imagine how Jeep has built up a bit of a cult following over the years.

Jeeps are blocky, lovable things, full of charisma in both their talents and imperfections.

Whether or not you like them, you have an opinion about them. They make you feel things, which is more than I can say about most of the anonymous lumps of metal driving around on US roads these days.

Jeep knows this, which is why it has a habit of putting Easter eggs in its cars — special, hidden details sure to delight its customers. The Jeep Renegade has them and so does the Jeep Gladiator.

During my many days spent with the 2020 Jeep Gladiator Rubicon mid-size pickup truck — which you can read a review of, view a photo gallery, and learn how to pull off its doors and roof — I found seven Easter eggs. There might very well be more! But I think I was pretty thorough.

1. The Willys MB drawing on all four of the truck’s wheels.

The Gladiator Rubicon comes with a set of 17-inch polished black aluminum wheels. If you look carefully, these wheels have a little red drawing of a Willys MB on them.

The Willys MB was built as a light military utility vehicle with off-roading abilities. It was manufactured for and used by the Allied Forces in World War II from 1941 to 1945. George C. Marshall, World War II Army Chief of Staff General, called it “America’s greatest contribution to modern warfare.”

By the time the war ended, the Willys was so popular and successful that over 650,000 of them had been produced.

If you look to the left of the Gladiator’s bed, you’ll see a subtle stamp: a heart and the number 419. People familiar with the region will recognize this as the Toledo, Ohio, area code. It’s where Fiat Chrysler Automobiles has its sprawling, 312-acre Toledo Complex, which is where the Jeep Wrangler and Gladiator are currently built.

3. The pictures of two-door Jeep Wranglers on the climate system.

I’ve actually never seen this on any of the cars I’ve test-driven: an outline of a specific car on the climate system, rather than just a universal, anonymous, and vaguely automotive shape. Obviously, a Jeep Wrangler has a very distinctive and iconic shape, so why not make that the image on the air recirculation button?

4. Another Willys MB etching on the windshield.

On the lower left-hand corner of the windshield, you’ll see another etching of the Willys MB. It’s positioned so that it looks like it’s about to climb up the edge of the glass. It’s freaking adorable.

5. Flip-flops on the passenger-side windshield cowl.

If you look carefully on the passenger-side windshield cowl, you’ll see a little etching of a pair of flip-flops. Allegedly, this Easter egg is a nod to a longtime Jeep fan and veteran car journalist, Rick Péwé.

Péwé made an appearance in this The Fast Lane Car video from September 2018. When asked about the flip-flop etching on the Jeep, Péwé held out one of his open-toed-sandaled feet as an explanation. “Yeah, that’s why,” he laughed. Péwé is known for his love of open-toed footwear.

Over the years, he’s “given Jeep a lot of input on design and function,” he said.

6. The Willys appearing again in the gauge cluster.

This one, admittedly, I would not have found had The Transmission not first pointed it out: the Willys shows up in the gauge cluster when you cycle through to the Trip Info screen. There, you’ll see an Army-green war Jeep that looks as though it’s ready to storm the beaches of Normandy.

Also spotted by The Transmission, you’ll notice the Gladiator’s steering wheel wears a circle around the Jeep logo with a peculiar three-pronged design. “The company’s marketing team informed us that it’s a nod to the original 1940s-era steering wheel, which was a three-spoke design,” the outlet reported.

Next time you find yourself in or near a Jeep Gladiator, be sure to look out for these Easter eggs.