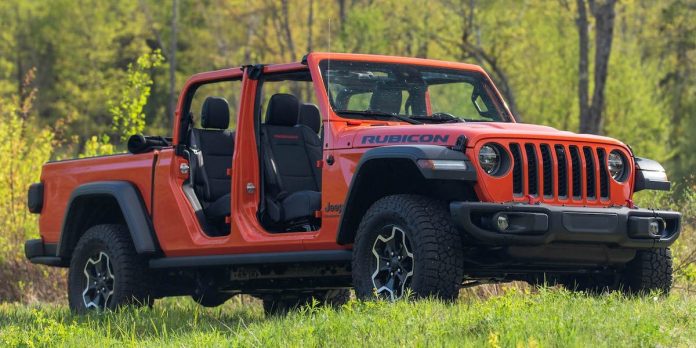 One of the most charmingly fun things about the 2020 Jeep Gladiator is that you can pull its doors and roof off for the ultimate freedom-driving experience.

As ’90s kids who spent much of our childhood assembling and disassembling Legos and K’Nex, the prospect of taking apart a press loaner for fun and for science was extremely appealing to me and my boyfriend.

So, we parked our borrowed Gladiator Rubicon under the shade of some trees one afternoon and got to work.

The Gladiator we had — which Business Insider has published a review and photo gallery of here — came with the optional three-piece removable hardtop in addition to the removable doors.

A word of advice to anyone considering a jaunt in doorless Jeeps: Be sure to check your state laws regarding the legality of driving a car on public roads, as it comes down to the wing mirrors. Different states have different wing mirror requirements; some require both, some don’t care. It varies. It’s better to do a little research instead of being hit with a ticket.

Both the Wrangler and Gladiator come with a tool kit in a handy little nylon pouch, so you don’t have to worry about finding the right-sized tools. It comes with all you’ll need to remove the doors and the roof.

Well, that and a little bit of muscle.

Here’s how we did it.

Arguably this doesn’t have to be the first step, but it gets the roof panels out of the way for when you’ll need to remove the front doors. Plus, it’s the easiest step.

As its name suggests, the optional three-piece hardtop comes apart into three pieces. The two front pieces, located above the driver and front passenger, come off extremely easily and can be removed in a matter of seconds.

The big latch beneath the sun visor.

And the three L-shaped latches along the rest of the panel.

Lift it up and off; they’re not heavy at all. Find a place to store them.

2. Roll all the windows down.

This is useful because you can grip the doors more easily along their frame with the window rolled down. Also, you reduce the risk of accidentally smashing the glass if something slips.

3. Undo both bolts in all four doors.

Looking at the Gladiator, you’ll notice two exterior hinges holding the doors to the body. Using the T50 bit and the ratcheting socket wrench, unscrew and remove the bolts from both hinges of all four doors. You’ll wind up with eight screws in total.

When unscrewing, take care to place your hand behind the wrench so you don’t mess up your paint. Remember: righty tighty and lefty loosey.

Worried about misplacing those bolts? Don’t even worry — Jeep has you covered. Under the left rear passenger seat is a little compartment where you can store the bolts for safekeeping.

Since the Gladiator has electronically adjustable windows, wing mirrors, and lane-change alerts, there is a bunch of wiring that goes into those doors that needs to be undone.

To do this, get down into the footwell of the front row and pop off the black plastic panel next to the doors.

Under that, you’ll see a wiring harness. Push up on the red piece to unlock the mechanism and then flip up the white piece. The wiring should be able to unplug after that.

Unloop the vinyl loop hooked to the door and tuck the whole thing into the cargo net for safekeeping. Pop the black plastic panel back into place.

Do the same for both sides.

5. Undo electrical harnesses on the back doors.

Similarly to the front doors, the back doors also have electrical harnesses that need to be undone.

At the base of the B-pillar, or in the rear passenger footwell, there’s another black plastic panel that can be popped open.

You’ll see all the wiring bunched into a gray clip. Pop that clip off.

Unloop the vinyl loop. Tuck all that into the door mesh pocket for safekeeping. Replace the plastic panel.

Each door is held in place by one final anchor bolt. Using the long arm T40 torx bit, unscrew those and put the bolts aside for a second.

We were not able to find a spot in the little compartment for those anchor bolts, however.

Time to lift the doors now!

Lift straight up because the doors are attached to the body via a hinge. Pull the pin on the door out of that hinge and you should be good to go.

Note that the front doors are a bit heavier than the back doors since they are larger and equipped with more electronics.

Find a place to store the doors.

Since there isn’t a readily available compartment for those door anchor bolts, we just screwed them back into the truck’s frame. That way, we would know exactly where we’d left them.

8. Unscrew the rear half of the roof.

Okay, now it’s time to remove the final piece: the remainder of the roof and the rear window.

Locate the two bolts holding the front half of the rear roof piece in place. Undo them and place them in the under-seat compartment.

Next, locate the two bolts holding the lower half in place. These are found at the base of the C-pillar, near where the rear passengers’ outer biceps would be. They aren’t covered up by plastic panels or anything, so they’re pretty easily accessible.

Once you have those two bolts, store them in the compartment, too.

9. Fold the rear seats down.

You might need to fold down the headrests, too.

This gives you a bit more room to work and also access to the last four bolts you’ll need to undo later.

10. Undo the electrical harness for the back window.

Near the driver’s side rear passenger seat, where you unscrewed the roof bolt, is also an electrical harness that controls the rear window defroster.

11. Remove the piece of black trim.

Right below the rear window is a piece of black trim held there by some Velcro. Peel it off and put it aside.

Place them with the rest in the compartment. (Yes, we tried fitting the anchor bolts in the remaining holders but they didn’t fit.)

This is where being taller would have come in handy. Even with my boyfriend’s help, we still struggled with removing the rear window/roof panel. I wasn’t quite tall enough to lift it clear from the truck’s roof rails, so I had to climb into the cabin and very carefully slide it backward and away from the cabin.

Then I had to climb into the bed and keep sliding it. Eventually, we were able to get it off and huffed it over to where the other parts were huddled. It was very heavy and cumbersome and unwieldy, but we managed in the end. I wish it separated into two pieces instead of staying as a single one. Alas.

And that’s it. You’re done! The whole thing took us perhaps 20 minutes, but that was only because we’d never done it before. We watched a YouTube video beforehand, though, and found the whole process to be very straightforward. With practice, I’ve no doubt we could cut down on that time significantly.

Driving a car with no doors and no roof is a very fun experience. You can see the environment speeding by and you really do feel closer to everything else. When you park the car, you can just hop out. No door to open, no door to close. It was liberating.

Below, please enjoy some photos of a doorless and roofless Jeep frolicking in a field.

For Sale: Battle-Ready 1973 Dodge Challenger on a Military Truck Chassis

Business not as usual in Kawartha Lakes after many stores reopen

Motorcyclist killed in collision with pickup truck on Taylorsville Road –...