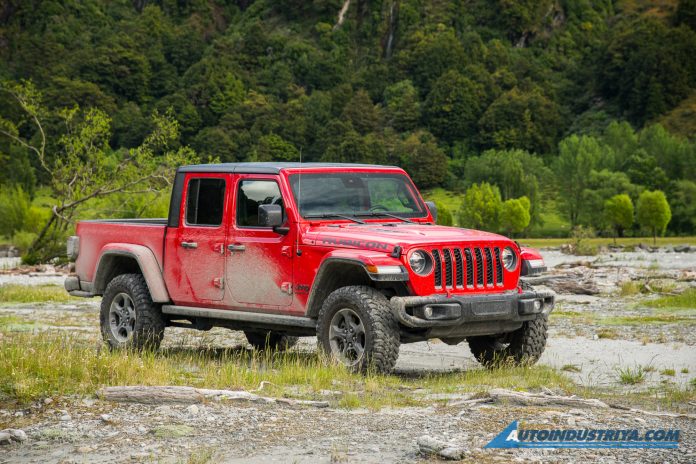 No exact details have been revealed yet by the automaker. But based on the teaser photo they released on their Facebook page, the PH-spec Gladiator will supposedly be available in Rubicon trim.

This could mean that the 2020 Gladiator bound for the Philippines will come with Fox shock absorbers, front and rear skid plates, heavy-duty steel front and rear bumpers, large off-road style alloy wheels wrapped in 32-inch tires, and massive wheel arches.

Like the Wrangler, the Gladiator will get the same cabin layout. A choice of either a 7-inch or 8.4inch Uconnect touchscreen infotainment could be available, along with the satellite navigation, Apple CarPlay, Android Auto, as well as Bluetooth. Other features like automatic climate control, USB-C port, and 230V A/C charging outlet may be part of the interior package as well.

Under the hood, the Gladiator is powered by the familiar 3.6-liter Pentastar V6. The naturally-aspirated six-cylinder puts out 289 PS along with 352 Nm of torque. Power is then transferred to an eight-speed automatic transmission with manual select. A Selec-Trac (or Rock-Trac) 4×4 system, a two-speed transfer case with a long-range transfer box, locking differentials, and heavy-duty Dana front and rear axles allow the Gladiator to go anywhere it pleases no matter the terrain.

There are no exact prices yet for the 2020 Jeep Gladiator. But given that pick-up trucks sold in the country are exempted from excise taxes, we won’t be surprised if Jeep Philippines will be able to price the Gladiator competitively. Hopefully, the more affordable Sport (as well as the Overland we got to drive in New Zealand) version will also be available for the Philippine market beside the Rubicon.

Health Department responds to report that bodies were transported to morgue...