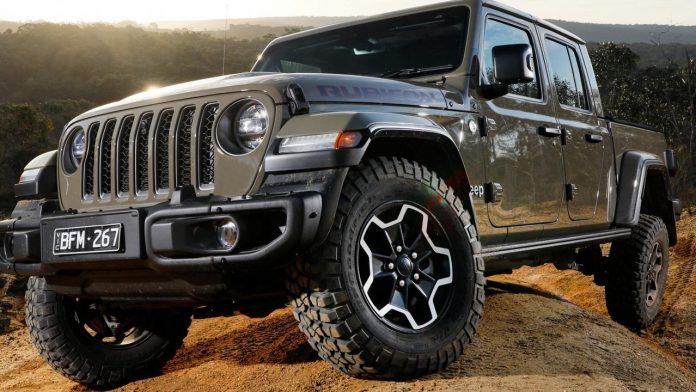 It’s cool and capable and with an appropriately butch design, but Jeep’s first ute in Australia is no workhorse.

Priced from about $82,000, the Gladiator is big and imposing (it’s almost 5.6 metres from tip to tail) but its payload (527-620kg) and towing capacity (2721kg) are down on similarly priced utes. Load up the family and you’ll have to be frugal with camping gear.

It makes up for that with a couple of unique selling points that could tempt the fashionista. It’s the only convertible ute, coming with a removable soft or hard top for sun soakers. You can even fold the windscreen and remove the aluminium doors. If things get dirty, you simply hose out the interior.

Inside, there’s an 8.4-inch touchscreen with Apple CarPlay/Android Auto, active cruise control, smart-key entry, a high-resolution camera and an optional removable Bluetooth speaker for the campsite. There are also accessory buttons for wiring a light or winch.

As with the exterior, the cabin is oozing retro, the short dashboard and bulging bonnet a constant reminder. There’s the occasional hangover in the conversion to right-hand drive, mainly the cramped footwell that has no space for a foot rest.

In a nod to Jeep’s extreme off-road focus, the rough and ready Rubicon model (about $83,000) has locking differentials, 17-inch mud terrain tyres and stabiliser bars that can be disconnected to allow the chunky rubber to better move around in the wheel arches when picking over rocks or logs.

The Overland ($82,000) does without some of the extreme off-road hardware and replaces it with leather, a heated steering wheel and larger 18-inch alloys. Both are among the most capable utes off-road, although the distance between the front and rear wheels means the occasional belly scrape over peaks or logs.

Indeed, it’s tracks and trails – not the work site – where Jeep sees the Gladiator playing most.

Perhaps that’s why, unlike the sea of diesel rivals, the Jeep has a 3.6-litre petrol V6 under the bonnet. Its 209kW power peak lends it appeal against diesels, although the 347Nm of torque is less endearing and unlikely to appeal to those wanting to tow or carry a load.

The V6 is free revving and eager, making overtaking a snip, and the eight-speed auto helps keep things bubbling away nicely. Squeeze the throttle, though, and the downshifts can be dramatic as it chases that torque.

Where a diesel may effortlessly haul up freeway hills in top gear, the Gladiator often requires a downshift. There are also wind rustles and the occasional whistle, a rare blemish on an otherwise quiet cabin.

The Gladiator’s size also works against it in the city. The turning circle is a broad 13.6 metres, so be prepared for three-point turns.

As with the Wrangler it’s based on, steering tends towards vague and persistent bumps jiggle through the body.

But its coil-sprung rear end is more settled than workhorse utes, which rely on heavier-duty leaf springs prone to bucking.

The Gladiator’s tray looks large, but at 1531mm long it’s mid-pack for modern dual-cab utes and its 1442mm width is just short of many.

There’s still room for kayaks and dirt bikes and there are even guide marks etched into the tray for loading bikes into place. While it clearly shares DNA with the Wrangler, Jeep says “it’s not just a Wrangler with a bed”. There’s a new steel frame and five-link rear suspension from the Ram 1500 truck.

Safety is a mixed bag. There are no curtain airbags and none for rear passengers. ANCAP hasn’t crash tested a Gladiator but the Wrangler it’s based on scored poorly.

It does, however, have autonomous emergency braking (AEB), blind spot monitoring and active cruise control.

As capable as it looks off-road, it’s no workhorse.