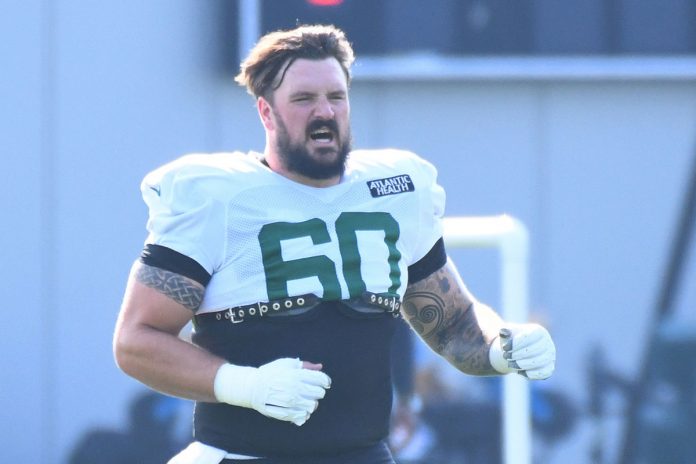 You could describe new Jets center Connor McGovern as a meat-and-potatoes guy, but put the emphasis on the potatoes.

McGovern grew up in Fargo, N.D., with his family owning potato farms. He developed a work ethic that got him to the NFL while learning the family business.

“You have to get up early and you never know what you’re going to have to deal with that day when you’re farming,” McGovern said this week. “It’s that work ethic of whatever is in front of you, whatever task you have that day, just attacking it and doing it to the best of your abilities, not being afraid to work hard. Those are definitely qualities that have helped me get here.”

Here is at the center of the Jets’ rebuilt offensive line. He was signed to a three-year, $27 million contract as a free agent in March. The team is hoping he can stabilize a position that has been a revolving door since Nick Mangold was cut following the 2016 season.

McGovern has played every position along the line over the course of his college and NFL career. But center is his favorite spot.

“I enjoy having the little bit of control and making sure everyone’s on the right page,” McGovern said. “I enjoy that mental aspect of it, making sure I have the right call. The mental side I really started enjoying in my later years in college.”

McGovern knows most people’s vision of Fargo comes from the movie or TV series that bears its name. He laughs about that unflattering portrayal. McGovern is proud of his hometown and said he wants to raise his family there.

Ron Offutt, McGovern’s grandfather, started farming potatoes with his father in the early 1960s, and the company grew from there. Today, R.D. Offutt Farms produces more than 50,000 acres of potatoes every year. McGovern’s father Keith is the company’s president. McGovern was raised in his family’s fields, riding the tractor, helping his father check the crops for disease and working in the family’s truck store.

“It keeps you humble,” McGovern said of farming. “You have years where you have a fantastic crop and make a ton of money and life’s good. A couple of months later you go to do your next crop and it doesn’t turn out so well and you lose a bunch of money. You never can get too high or too low in farming. You never know what the next day is going to bring, what the next week is going to bring.”

Farming was not the only thing he learned from his grandfather. Football was also in the family’s blood. His grandfather played in college and his cousin briefly was on the Saints. McGovern picked up the game when he was in fourth grade. The only problem was he weighed 150 pounds and the weight limit was 130. He spent the summer losing 20 pounds to play.

McGovern would take up powerlifting under his dad’s watch in the seventh grade. When he got to college at Missouri, he set the school’s squat record with five reps of 690 pounds.

The Broncos selected him in the fifth round of the 2016 draft. McGovern started 36 games in three years in Denver before hitting free agency in March.

McGovern said he got a sense the Broncos were not interested in bringing him back unless it was on the cheap. When the Jets stepped in with their offer, McGovern grabbed it.

“There’s no hard feelings,” McGovern said. “I talked to [Broncos president John] Elway about it and he was like, ‘that’s not where I like to spend money.’ He likes to spend money on guards and tackles. That’s just how he likes to build a team. I didn’t take it personally, by any means. I’m extremely happy to be here. I appreciate that [Jets GM Joe Douglas] thinks center is an important spot and worth spending a little money on.”

The 6-foot-4, 305-pounder is now in the middle of the Jets offense, an offense he said this week he believes can be dangerous. That starts up front.

“I think we have the offensive line to really help Le’Veon [Bell] and protect Sam [Darnold],” McGovern said. “A dangerous offense is a balanced offense and being unpredictable. I think that’s what we’ll have this year.”

Mozambique: Torture by security forces in gruesome videos must be investigated