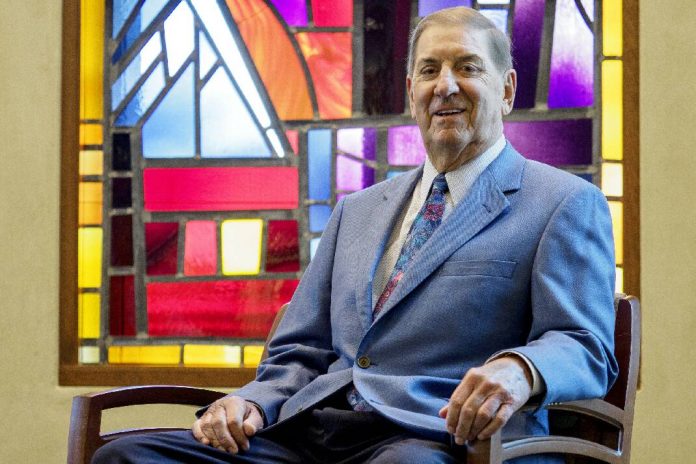 “I lasted four months,” he says. “The truck had 13 gears, but I don’t think I ever got past fourth.”

It would be one of the only times in his life that Pesnell got stuck in low gear.

After his short stint with the heavy-duty truck company, Pesnell, the 2020 winner of the Champions of Health Care award for volunteerism, went to work for Provident Life Insurance Co., a job that would eventually bring him to Chattanooga as a top executive at Provident, and later Cigna.

“It was a good ride,” Pesnell says of his corporate experiences. “I enjoyed my career.”

Pesnell is honored for his 16 years of combined service as a member of the CHI Memorial Foundation board and the hospital’s main board of directors. Most recently, he served three, 3-year terms on the hospital board, including one term as chairman.

Pesnell retired from his career as an insurance executive in 2000, and was tapped to serve on the CHI Memorial Foundation board, the philanthropic arm of the hospital. He has also served on the board of directors of SunTrust Bank here and Calstead Foundation, which supplies subsidized housing for the elderly.

Pesnell, 80, brings a lifetime of sales, marketing and management expertise to his volunteer positions. His work at Memorial includes helping the hospital through almost two decades of growth including the building of the seven-story Guerry Heart and Vascular Center, part of the hospital’s $318 million, multi-phase expansion. Also completed during Pesnell’s time as a volunteer were the MaryEllen Locher Breast Center, the Rees Skillern Cancer Institute and the acquisition of the CHI Memorial location in Fort Oglethorpe, Georgia.

“We’ve had lots of balls up in the air at the same time,” says Pesnell, who lives with his wife, Pat, on the side of Signal Mountain.

Pesnell attributes Memorial’s growth and success to a service-oriented attitude that permeates the institution, from the highest-ranking executives to the clerical staff.

“When I go out in this hospital, one of the things I notice most is the passion and caring of our employees looking after our patients,” he says. “You can have great buildings and equipment, but if you don’t have the right people you are not going to be successful.”

* Role: Long-time volunteer and former board chairman of CHI Memorial

* Career snapshot: After decades in the insurance business with Provident Life Insurance Co., and later Cigna, Pesnell became active on the CHI Memorial Foundation board in the early 2000s. He later served on the hospital’s main board of directors, including a stint as chairman. He, along with others, has helped the hospital navigate almost two decades of growth.

* If he hadn’t become an insurance executive: “I went to work out of college for International Harvester, in their sales training program. They sent me out to drive big trucks.”

* Did you know? Pesnell sold life insurance while at Samford University in Birmingham.

Raising money to help fund the Memorial operation has always been about having the right people in place, and tapping Chattanooga’s deep pockets for philanthropy, Pesnell says.

“The generosity of this community has been such a blessing to this [hospital] ministry,” he said. “There are a lot of families here [in Chattanooga] who have done well and have given back to the city.”

The ongoing COVID-19 pandemic has pinched the hospital’s fundraising efforts, but the faith that fuels the institution will see it through the crisis, he says.

“With the people we have here, it’s always going to be a true winner,” he says. “I’m blessed to be part of this ministry.”

* Meet the 2020 Champions of Health Care

* Chattanooga’s COVID-19 response: Joining forces to serve the most vulnerable

People in need snatch relief goods from truck in Jamalpur