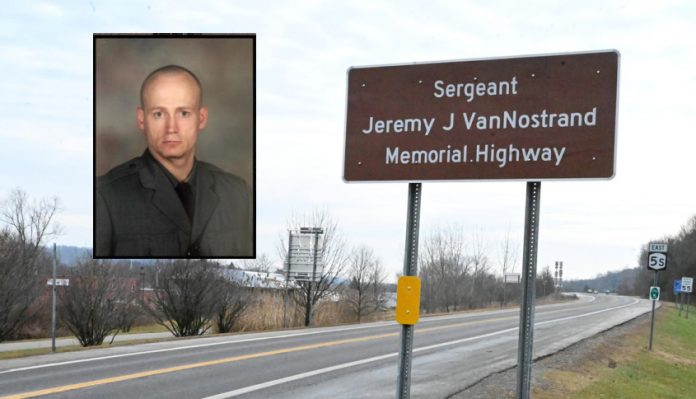 FULTON COUNTY — A Johnstown man has been indicted in the November 2018 crash death of state police Sgt. Jeremy VanNostrand, a charge that centers on a box truck crash avoidance system and the man’s response behind the wheel, Montgomery County District Attorney Kelli McCoski said Friday evening.

The box truck that slammed into the back of VanNostrand’s car had the crash avoidance system in place, that, if working properly, would brake automatically if it sensed an impending crash, McCoski said. But the system wasn’t working that morning and relayed that information to the driver both visually and audibly, McCoski said. The box truck driver is accused of ignoring that warning and continuing to drive the vehicle.

That system aside, there also was no evidence the operator hit the brakes manually in the moments before impact, McCoski said. Tests showed the box truck’s brakes were in working order, McCoski said.

Indicted was Aaron M. Munise, 34, of Johnstown. He faces one count each of criminally negligent homicide, a felony, and reckless driving, a misdemeanor.

The criminally negligent homicide count carries a potential sentence of up to four years in prison.

Our subscribers help us bring this information to you. Please consider a subscription at DailyGazette.com/Subscribe

Munise is accused of causing the death of VanNostrand on Nov. 27, 2018, through criminal negligence, as the box truck he drove slammed into the back of VanNostrand’s personal vehicle on Route 5S in Fultonville.

VanNostrand, 36, of Schenectady County, had been on his way to work on Route 5S, when he stopped to make a left turn into the state police barracks.

A trooper at the time of his death, the state police posthumously promoted him to sergeant.

A lengthy investigation into the crash ensued, which led to this week’s indictment. Munise was arraigned Friday and ordered held on $5,000 bail.

By definition in state law, the criminally negligent homicide charge accuses Munise of failing “to perceive a substantial and unjustifiable risk that such a result will occur or that such circumstance exists” and that the risk is “of such a nature and degree that the failure to perceive it constitutes a gross deviation from the standard of care that a reasonable person would observe.”

In Munise’s case, he’s accused of driving the box truck a distance of more than 20 miles, all while the truck’s crash avoidance system was visually and audibly alerting that it wasn’t working, McCoski said.

He picked up the leased truck, a Ryder truck, at Clynk in Glenville en route to a destination west of Montgomery County, she said.

Then, when VanNostrand stopped to make the left turn, there was no evidence Munise manually hit the brakes, McCoski said.

“Tests were done with regard to the brakes after the crash that indicated that the brakes themselves on that vehicle were, in fact, working,” McCoski said.

VanNostrand, a six-year veteran of the state police, was remembered after his death as a hard-working dedicated law enforcement officer, as well as a husband and a father.

He joined the state police in December 2012 and initially served elsewhere in the state before he returned to patrol the roads near where he grew up in Mayfield.

Prior to becoming a state trooper, VanNostrand served as a state corrections officer and went to Fulton-Montgomery Community College.

VanNostrand’s family members, state police and officials then gathered last November to dedicate a sign commemorating the renaming the stretch of Route 5S in front of the state police barracks in VanNostrand’s honor.