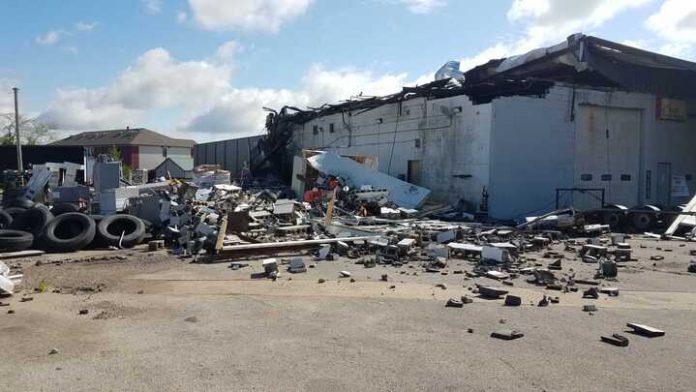 LEBANON, Mo. Some businesses were hit hard by Monday’s powerful storm in Lebanon. Jones Truck Plaza has some of the most serious damage. The roof was torn off, and the repair shop’s cinder block walls collapsed.

Staff at the Lebanon truck stop knew there was a storm on the way, but were not prepared for this. “I just seen the roof coming off and stuff was twirling in the air in circles,” says store manager Jordan Peters, “so I just took off running back into the store.”

Peters had run outside to pick up a sign that had blown into the road, when the stronger wind hit. “There was a couple people getting out of their cars running inside. As soon as I got in there, I was getting them into the bathroom, you know, center location. And the ceiling tiles were falling on them, and they were all soaked, we were all soaked,” says Peters.

The wind destroyed the truck repair shop, but also ripped up the roof over the convenience store. Thankfully, no one at the truck plaza or anywhere in Lebanon reported injuries from the storm, but the damage was widespread.

Among them were destroyed hangars at the airport, a torn up the roof at the career center, and some churches suffered very noticeable damage.

“There was no sirens, no warning, nothing,” says Peters

Rowe says there was a severe thunderstorm warning, but no sirens. He says *before it hit Lebanon, the storm didn’t meet the siren criteria of a tornado warning, a confirmed funnel cloud, or winds over 70 miles an hour.

“Basically no warning on this storm. It just absolutely came in and did its damage and left very very quick,” says Rowe.

Officials say it was all straight-line winds.

“We think that they were 70 to 85 to 90, according to National Weather Service, but nobody actually put a meter on them,” Rowe says.

But Peters thought for sure he’d just experienced a tornado. “I seen pieces of the roof, the tin and the metal, twirling in circles,” says Peters.

Jones Truck Plaza doesn’t know yet when they’ll get to reopen, but Peters says they will rebuild.

Canceling the NBA season could be financially devastating for players