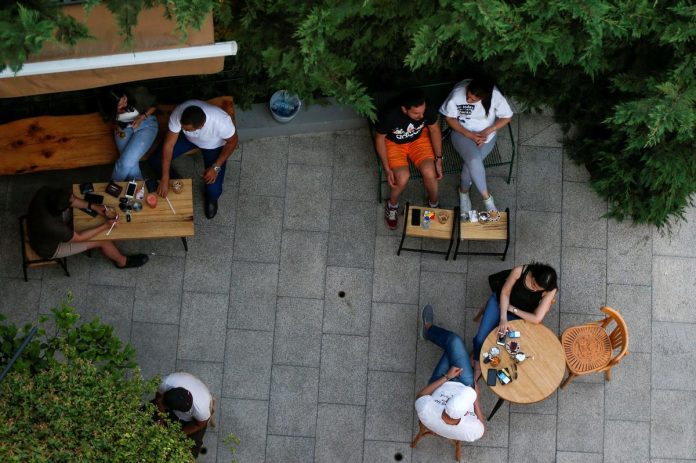 AMMAN (Reuters) – Jordan will seal off a city near the Syrian border from Monday following the largest daily rise in four months in coronavirus infections, which officials say have come mainly from its northern neighbour.

FILE PHOTO: People enjoy drinks at a cafe which reopened to the public for the first time since the start of the coronavirus disease (COVID-19) restrictions in Amman, Jordan June 6, 2020. REUTERS/Muhammad Hamed/File Photo

The health ministry said half of the 39 cases recorded in the last 24 hours were from Ramtha city, near the Syrian border.

Officials say truck drivers and individuals entering the kingdom from the Jaber border crossing with Syria are spreading the virus.

Ramtha will be isolated as of Monday with the authorities re-imposing restrictions on movement in the first such reversal of a provincial area since the authorities eased a nationwide lockdown last June.

Jordan, with one of the lowest infection cases in the region, has reported 1,378 cases and 11 deaths from COVID-19, the respiratory disease caused by the new coronavirus.

The spread of cases from Syria prompted the kingdom last Wednesday to impose a week-long closure of the Jaber border crossing, a trade artery for Syrian and Lebanese transit goods to the Gulf and Iraq.Prime Minister Omar al Razzaz said on Sunday that tougher measures at the border crossing would be imposed in the next few days given the spike in neighbouring countries and complacency in applying social distancing and health safeguards.

“We don’t want, God forbid, to have a second wave,” Razzaz said.

In addition to measures, such as increased testing, Razzaz said the authorities will increase the number of caravans to house hundreds of truck drivers and Jordanians arriving from Syria who are put under quarantine.

Syria has witnessed an alarming increase in the spread of the coronavirus in the last two weeks, western NGOs and World Health Organization officials say.

The Damascus government has admitted there has been a rise in daily cases, with 84 cases announced on Sunday. But medical sources and witnesses say there are many more that are not reported in a war-devastated country where testing is limited in a fragile health service.