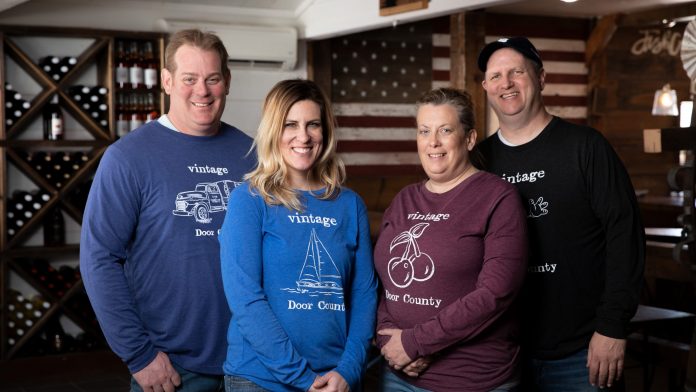 GIBRALTAR – A years-long court case involving one family business ended with a lifted ordinance that could benefit future entrepreneurs.

The Gibraltar Town Board updated an ordinance in 2018 that prohibited food trucks in the township after local farm market White Cottage Red Door opened one outside their store.

The owners filed a lawsuit that questioned whether the town could block actions authorized by the county and state. On Thursday, Door County Judge D. Todd Ehlers ruled in favor of the business, and labeled the town’s ordinance unconstitutional.

Owners Chris and Jessica Hadraba along with Lisa and Kevin Howard, Chris Hadraba’s sister and brother-in-law, started flipping burgers in their truck in summer 2017. They obtained the necessary county and state permits but, weeks after opening, the town constable warned the family would be charged $500 each day they remained open.

Changes to the town’s 1982 ordinance blocked outdoor seating along with other rules that made it made it impossible for White Cottage Red Door’s food truck to function. Town board members at the time worried about how food trucks would impact the town’s feel, according to meeting minutes. The Hadrabas’ and Howards’ truck sat about 2 miles outside downtown Fish Creek, not close to other businesses.

Ehlers determined the board’s actions were “protectionist.” Former Gibraltar Chairman Dick Skare led the board when the changes were made and lawsuit filed — he also owns The Cookery, a restaurant in Fish Creek’s main strip. Another board member worked at another local restaurant at the time, according to White Cottage Red Door’s attorney Milad Emam.

“At the first meeting where the town board discussed (our client’s food truck) members publicly said they want to protect restaurants from food truck competition,” Emam said. “This decision vindicates people’s right to earn an honest living across industries. Protecting businesses from competition is not constitutional and that has ramifications.”

The Wisconsin Constitution forbids politicians from making decisions to protect certain businesses over others, according to a press release from Institute for Justice, who represented the Hadrabas and Howards.

Lisa Howard said reopening a food truck “was always the plan” if the lawsuit turned out as it did. However, the ruling came as Door County’s tourism season quiets and the COVID-19 pandemic still threatens public health. They also sold the original food truck because they couldn’t afford storage for an unused trailer.

“Now we kind of have to go back to the drawing board,” Howard said. “When we first got the permits, then we were forced to sell the food truck, we never thought that we’d still be in this position up until now.”

White Cottage Red Door did not open this season because of the pandemic. Howard joked a food truck would have done well.

“We’re anxiously hoping next year brings a whole new vibe to business on both fronts,” she said.

FOR MORE DOOR COUNTY NEWS: Check out our homepage.