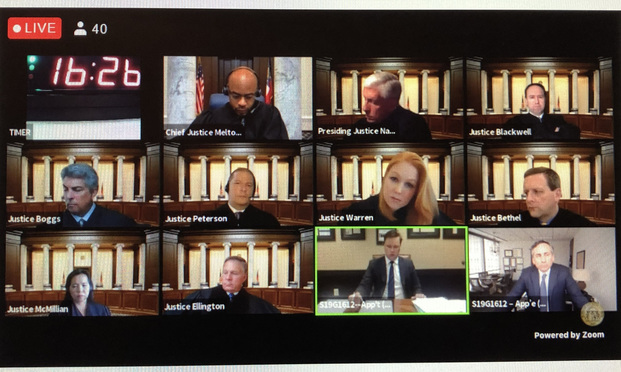 The Georgia Supreme Court parsed percentages in oral arguments Tuesday for a case of first impression that could affect how financial responsibility is divided among all parties to lawsuits.

A complex dispute came down to simple math. The verdict being appealed split the fault evenly between a pedestrian and the driver of the truck that ran over him. Under Georgia law, that means no money can be awarded.

The losing side⁠—which asked the jury for $20 million in damages⁠—is seeking a new trial in the hopes of dividing fault differently. The winning side is defending the $0 verdict by saying the law should not be changed to improve anyone’s odds.

Justice David Nahmias carried on an intense inquiry. Here are a few of his remarks.

“That makes no sense to me.”

“That doesn’t seem to be true as a matter of logic or law.”

“Maybe you can focus on the question.”

“It’s a complicated and important case,” Chief Justice Harold Melton said, giving thanks and compliments for the performance of the two lawyers.

Caleb Walker of the McArthur Law Firm in Macon argued for Nancy Quynn, administrator of the estate of Brandon Lanier. Lanier was 31 when he died of injuries from being run over by a truck while crossing Main Street in downtown Tifton on April 22, 2014. Walker tried the case in 2017 along with Katherine McArthur, Jordan Josey and Laura Penn of the McArthur Firm.

Using Georgia’s apportionment statute, the jury split the responsibility evenly. The verdict apportioned 50% of the fault to Lanier, who the defense contended stepped out into the street after the “walk” sign turned to a flashing yellow warning. That point was disputed. The other 50% went to the driver, Riley Jake Hulsey and his employer, TriEst Ag Group.

Under Georgia law, if a plaintiff is found to shoulder 50% or more of the responsibility, then the defendant pays nothing. So it was a defense win through shared fault.

On appeal, Walker asserted the verdict form should have contained three lines instead of two. That would allow the jury to divide the fault by three instead of two. If that had led to a third of the responsibility designated for each party, the plaintiff holding less than half the fault would have been entitled to damages.

“This is not the case to make a change in Georgia law,” Matthew Moffett of GRSMB in Atlanta. Moffett tried the case with Jacquelyn Smith of his firm.

The high court granted a writ of certiorari to answer one question: “Was the employer in this case entitled to summary judgment on claims of negligent entrustment, hiring, training, and supervision, because it admitted the applicability of respondeat superior and the plaintiff did not seek punitive damages?”

Walker argued that the apportionment statute should negate the legal doctrine of respondeat superior—Latin for “let the master answer.” The rule puts the driver and the company together because the employer is responsible for the employee. He his firm’s case was severely prejudiced because Gwinnett County State Court Judge Joseph Iannazzone granted summary judgment on claims of negligent entrustment and negligent hiring, training and supervision “based on the erroneous assumption” that the respondeat superior rule still applied.

“It’s a significant difference,” Walker said. “In this case, it would have changed the outcome.”

Moffett argued that the court’s precedent says the apportionment statute should not overturn other laws, and to do so would lead to confusion and require employees to hire their own lawyers, rather than be defended by their employer’s counsel. He also suggested that if the McArthur Firm lawyers had wanted separate lines on the verdict form for the driver and the company, they could have accomplished that by making a negligent hiring case for punitive damages against the employer. But then the employer would not have had vicarious liability for the driver. He said they couldn’t have it both ways.

Moffett also said the trial judge allowed testimony that he thought was prejudicial about the Hulsey’s driving record.

Just as the clock ran out, Moffett concluded, “Georgia policy should not allow a plaintiff to dilute his own responsibility by adding redundant claims supported by prejudicial evidence in a lawsuit.”