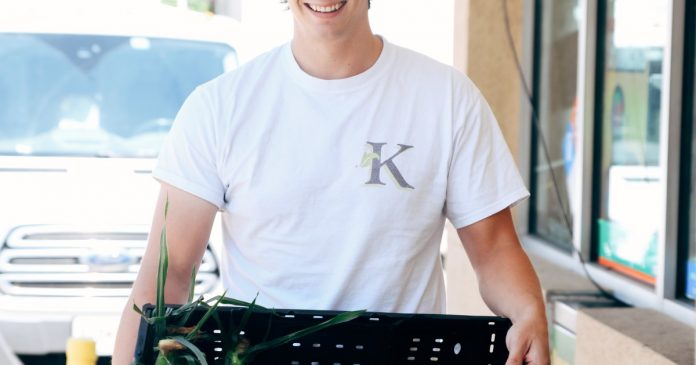 Maxfield Kaniger has recently started referring to his warehouse as “The Core.” It’s a lofty nickname, but the enterprise that started three years ago determined to eradicate Kansas City food deserts has earned it.

Kanbe’s Markets — named in part for its founder and his notion of what “can be” — has become a hub for a variety of local groups working to get food to the people who need it most. Two new partnerships, combined with increased demand because of the pandemic, have accelerated the non-profit’s growth from providing 8,000 pounds of food a week to 100,000 pounds a week in just two months.

“There are a lot of big problems in the world that I have absolutely zero idea on how to do much about,” Kaniger says, “but access and the choice to eat real, healthy, and affordable food is something that we can fix.”

His original idea for Kanbe’s Markets a few years ago was to open a full-sized, non-profit supermarket in an area that lacked easy access to fresh food. But he quickly figured out that such a store would take years and millions of dollars to build — and for a population that relies on public transportation, it would still be inconvenient.

Instead, he stocks 25 to 30 pieces of fresh fruit and vegetables in 28 locally-owned convenience stores east of Troost and west of 435, and from St. John Avenue to 85th Street. Bananas are 25 cents, apples are 35 cents, one pound bundles of collard greens are 49 cents, and grapes are $1.49 for 2 pounds. Kaniger restocks every two days.

He also delivers boxes of food, which are donated or purchased wholesale, to churches, schools, and other community facilities.

Before the pandemic, Kanbe’s five drivers and four full-time staffers were already moving what seemed like a lot of produce. The dramatic increase to 100,000 pounds was thanks to the USDA’s Farmers to Family Food Box Program. As a response to the COVID-19 pandemic, the USDA pays wholesalers for every box they donate to a non-profit.

The Mid-America Regional Council has delivered meals to qualified residents of counties around Kansas City, Missouri, since 1974. When creating a new delivery program, choosing Kanbe’s as a partner made sense to James Stowe, MARC’s Director of Aging and Adult Services.

“How could you not? Kanbe’s is at the center for logistics of food distribution into food deserts in our region,” Stowe says. “It’s a nonprofit, locally grown with an intense focus on getting fresh produce into communities.”

Much of that growth comes from the new partnership with Kanbe’s, which began this week. Before, Stowe says, the frozen meals couldn’t be tailored to recipients’ preferences or medical needs. But the new program is medically sensitive, meaning that if someone has diabetes or trouble swallowing, the food they receive will be appropriate. The new program will also include any fresh produce Kanbe’s can offer, as well as a loaf of Farm to Market bread and fresh Belfonte milk.

Kanbe’s will receive, store, sort, and deliver the medically sensitive meals for 3,100 clients.

Back in January, Kanbe’s moved to a 15,500 square foot warehouse and installed a 1000 square foot freezer. At the time, Kaniger thought it would take five years for the non-profit to grow into the space.

Instead, the pandemic has forced rapid growth.

“A lot of people have bare refrigerators or freezers right now and really are relying on organizations to help them through this time,” Stowe says. “Some of the normal support mechanisms people were using to get food have dried up or changed significantly and really left people in a bad situation.”

Even with demand higher than ever, many weeks the produce Kanbe’s receives or removes from shelves is about to expire, and Kaniger has to pay to compost it.

But for food that’s on the brink, but still edible? In comes another partnership: Chef Collective.

Jon Taylor started Chef Collective under the umbrella of his company Reach Collaborative. Chefs from the Rieger, Black Sheep, and the Culinary Center band together to prepare and deliver hot meals in the same area Kanbe’s serves. They also have a 36-foot-long food truck parked in Kanbe’s parking lot, where the chefs, who are all paid for their labor, make as many as 2,000 meals a week. The hot meals are then distributed by a variety of community service groups, which pick up the tab.

“Our meal cost coming out of the truck is typically somewhere between 15 cents per meal and 50 cents per meal on a normal day,” Taylor says.“We’ve been trying to figure out how to do this for several years, and the craziness of the circumstances we’re in right now created an opportunity.”

Taylor estimates that just in the past two months they’ve made it possible for as many as 45,000 Kansas Citians to eat chef-prepared meals at no charge. In addition to feeding people who are hungry, Chef Collective aims to minimize the city’s food waste and support regional growers.

This is where Kanbe’s and Chef Collective align. Kaniger says that one week he had a huge surplus of only grapes and jalapenos, all of which needed to be used immediately. The chefs in the parking lot food truck knew what to do. They smoked both the grapes and the peppers and turned them into a spicy, sweet sauce.

“You really need a chef to be able to jump in and do that,” Kaniger says.

The sauce covered pork butt, donated by another local group, and Taylor’s team delivered the catering-sized pans to many of the same organizations that Kanbe’s does.

“While I love Kanbe’s model, I obviously feel very strongly about it, I don’t believe it’s the end-all, be-all to feeding families,” Kaniger says.

Kaniger says he has another 23 corner stores on a waiting list to sell produce. He says that getting fresh produce into 50 locations means that a Kanbe’s Market would be within a half a mile from 150,00 people who would otherwise live in food deserts.

Feeding people and helping feed people are not the same endeavor, he says, but all of these groups working out of the “core” hope to make hunger a distant reality in Kansas City.